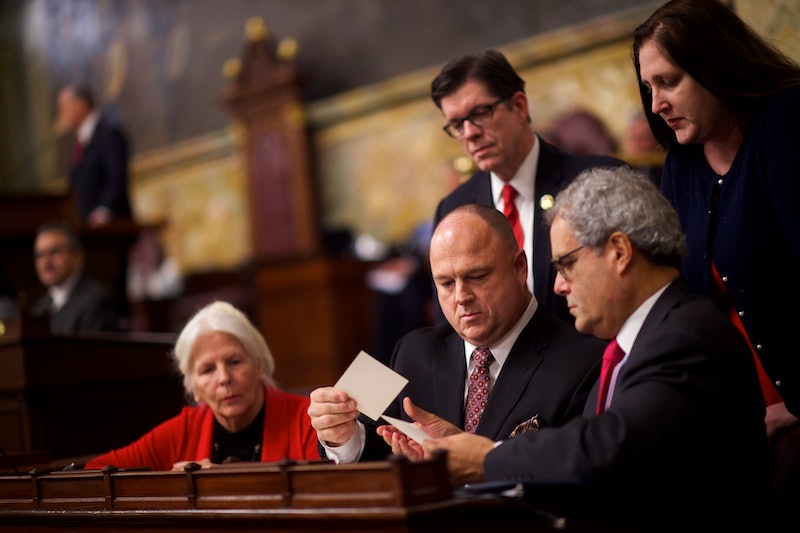 As we've seen this year, the electoral system in the United States is complicated. Normally every step that brings us from Election Day to the inauguration is a mere formality. This year, though, more attention has been paid thanks to the surprising win of Donald Trump. The president-elect's campaign season rhetoric galvanized a strong opposition, and they pushed to have some electors change their vote. That didn't happen, and now the next step is the counting the votes in Congress. Given that we usually gloss over this, you might have questions, like are each state's Electoral College votes read?

The answer is yes. They are all read aloud. This happens on Jan. 6 in Washington, D.C. at 1 p.m. ET. The president of the Senate, Joe Biden, will call the joint session of Congress to order and then different senators and representatives will read out the Certificates of Vote, the official tally of the vote from each state. The certificates are opened in alphabetical order and Biden hands them to tellers who read them into the congressional records. To get an idea for how this plays out, take a look at what happened in 2013. The entire session is still up on C-SPAN.

That part is not terribly exciting usually — but once again, this is not a normal year. There will be at least some faithless electors whose votes will be announced. We already know how many there were (not enough to change the outcome), but this will still garner attention since it is rather rare.

Potentially the most exciting part, though, comes next. After the results are announced, Biden will ask if there are any objections. If one senator and one representative make an objection to part or all of the Electoral College vote, it will then be debated. They move out of the joint session and the Senate and House meet separately for up to two hours, at the end of which they vote separately on whether to agree to or reject the objection. Then the joint session reconvenes and the votes are announced. For the electoral votes to be thrown out, both the House and Senate must vote to accept the objection.

There have been two objections in the nation's history — but both were rejected. The first was in 1969 when Richard Nixon was up against two opponents, the Democrat Hubert Humphrey and the segregationist George Wallace. There was a faithless elector from North Carolina, and some tried to have his vote thrown out. It ended up being counted.

The second was in 2005, after the second election of George W. Bush. He beat John Kerry, but a representative from the state of Ohio objected to that state's electoral votes because they said there had been irregularities. Sen. Barbara Boxer of California joined them in objecting, but both the House and Senate rejected the objection. The representatives who objected said their goal was not to change the outcome of the race but to draw attention to the need for electoral reform.

Who knows if the same thing will happen this year, but it's a definite possibility. So tune in on Jan. 6. You won't be bored.