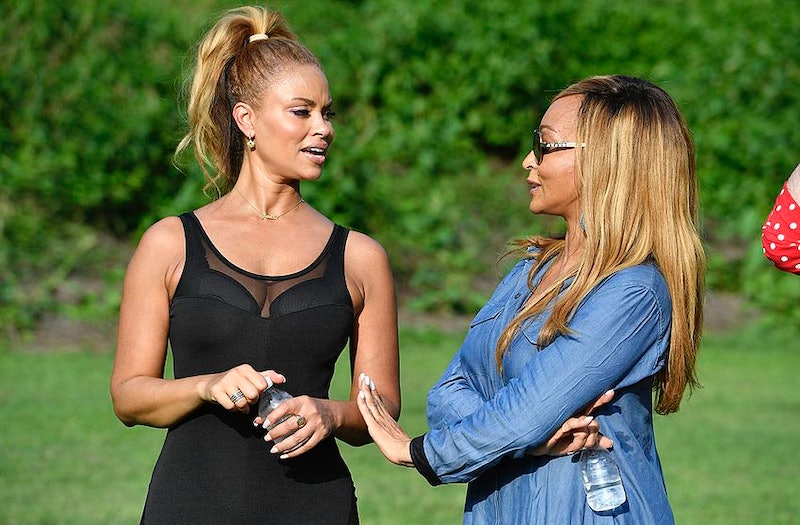 Frienemies are a staple in the Real Housewives franchise. For the most part, it's easy to figure out where two Housewives stand with each other at a particular moment, but that's not always the case. Especially considering Gizelle Bryant and Karen Huger's RHOP friendship. In fact, their dynamic is so confusing that even the two of them don't really know how to explain it.

For example, Karen and Gizelle sat down for an in-person interview with the hosts of New York Live earlier this month. Yes, this was a joint effort in person. Normally, that would be an indication that they are on good terms, but it's never that simple with these two. During that interview, Gizelle declared, "It's always a rollercoaster with us." Karen actually agreed with that description and elaborated, "It's a rollercoaster because we were friends a long time ago. I don't know what I call her now." Still, Gizelle insisted, "She's my friend."

Karen teased, "Stay tuned. We are working toward mending, but I don't know what I'd call her now." That is such an awkward thing to say while sitting right next to Gizelle. Karen also confirmed that they were riding in separate cars during their New York City press tour. Again, awkward. Nevertheless, Gizelle continued to declare that she considers Karen to be a friend of hers. In contrast, Karen said, "Let's question her definition of friendship. Keep watching."

So can Gizelle and Karen get to a point where they both actually agree that they're friends? Gizelle enthusiastically said, "Yes!" However, Karen wasn't as certain. Instead, she remarked, "I think we could work toward that." That's promising. Sort of. Karen actually did say some definitively positive things about Gizelle during their joint appearance. Karen explained, "The wonderful thing about Gizelle and me is that we do support each other when it comes to our brands, our work, and our family."

Gizelle revealed, "I have sprayed her perfume all over me." That's definitely supportive. And unique. During the Season 4 premiere episode, Gizelle called Karen when she was en route to her home. Gizelle brought cookies to comfort Karen while she grieved. Karen wanted her assistant Matt Byars to answer the door, but she end up accepting the cookies from Gizelle. Ultimately, Karen didn't let her in the house.

In a May 6 interview with People, Gizelle discussed the cookie incident. She reflected, "Karen and I will always have issues. But, we respect each other at the end of the day. So, I think it's OK for us to go through what we go through because at the end of it, there's love."

Nevertheless, Gizelle still threw shade in that interview. Gizelle wondered, "Does she really live in the whole house? If I had to be a betting woman, I would say that she has to live in a portion of it, like the basement." One step forward, and two steps back, right? Karen also discussed the cookie incident in a Bravo blog post that was published on May 6. Karen teased, "Gizelle's actions speak for her — you all be the judge." And Season 4 has only just started. There's a lot more drama to come, especially with these eternal frienemies.