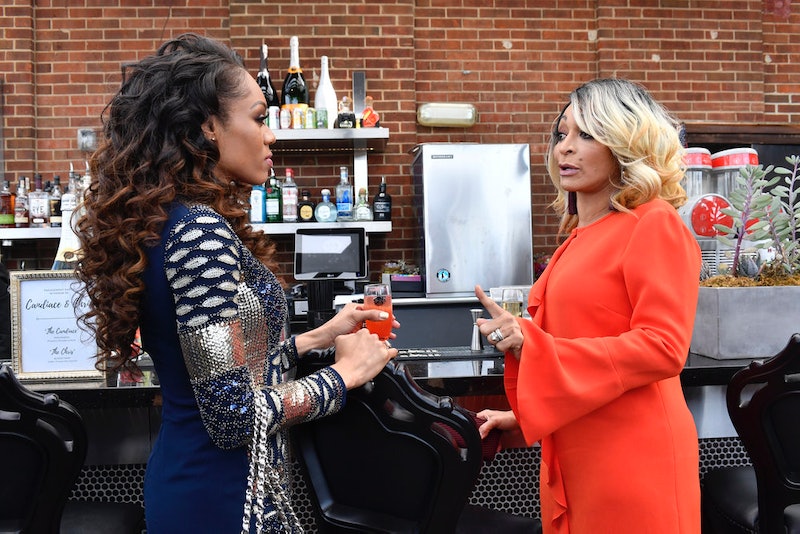 It can be tough to keep track of the on-again-off-again friendships on Real Housewives of Potomac. However, it seems like Karen Huger and Monique Samuels have a solid friendship. This is quite the rarity in the Real Housewives franchise where frienemies are in abundance. Nevertheless, Karen and Monique have been going strong.

These two are so close that Karen is one of three Potomac Housewives who has met Monique's baby Chase. In a May 9 interview with People, Monique revealed that Karen, Candiace Dillard, and Ashley Darby are her only costars who have met her third child, who was born in November 2018.

In that interview, Monique explained why her friendship with Karen works so well. Monique said, "Karen is hilarious because she's so over the top, which is why we get along so well. We're both that way." A lot of Housewives would get competitive if they had this in common, but not Monique and Karen. Instead, they both channel their outrageousness to support each other's personal and professional milestones.

A great example of that "over the top" behavior is Karen's gift for Monique's newborn son. Monique revealed to People, "She came over with a singing telegram. A guy, he was dressed up as a king, and he literally sang customized songs for the kids." Monique concluded, "It was so cute. It was a full-out production. That was definitely the best gift." That adorable gesture is a good indication that Monique and Karen are super close friends.

And the support goes both ways between the Potomac Housewives. On May 11, Monique supported Karen at the launch of her new perfume called La Dame Fragrance. Monique also shared, "I’m so happy for her! She’s a true BOSS and doing major things with her Fragrance!"

On May 5, Monique and Karen live tweeted the Real Housewives of Potomac Season 4 premiere. Clearly, they had the same opinion about one particular scene. The friends who throw shade together stay together, right?

On April 3, Monique shared a selfie of the two of them and referred to them both as "queens," which is a very accurate description. And again, another indication that the two of them are close these days.

Aside from hanging out with each other, Monique and Karen have date nights with their husbands. On February 17, Monique shared a photo of the ultimate quadruple date night. Aside from their own husbands, they were joined by Candiace and her husband and Real Housewives of Atlanta star Cynthia Bailey and her boyfriend. Let's hope this date night was filmed for the show. It would be great to have a Cynthia cameo appearance on Real Housewives of Potomac.

And true to form, Monique seemingly threw some shade with this line in her caption: "Happy couples only!!!!" Could that be about some of their costars?

A lot of reality TV stars entertain the audience by fighting and trying to take each other down. Instead, Karen and Monique go out of the way to lift each other up, which has been both heartwarming and hilarious.