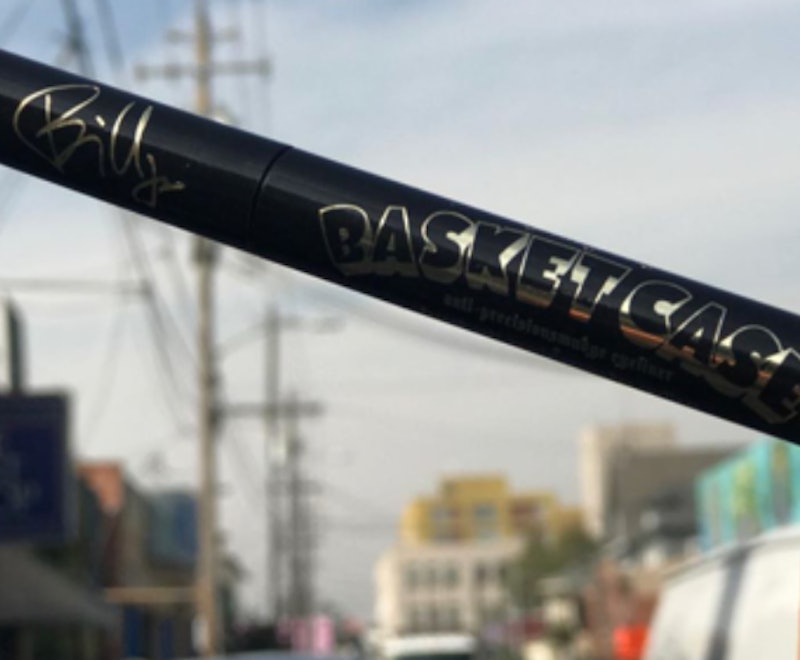 Kat Von D Beauty collabs are legendary. Last year's post-holiday Better Together mashup meshed KVD's gothic aesthetic with Too Faced's good-girl-gone-semi-bad vibe in an unconventional but beloved way. Now, Kat Von D Beauty is teaming up with Green Day's Billie Joe Armstrong for the Basket Case Eyeliner, which the brand teased via its Instagram story. Leave it to Kat Von D Beauty to shake it up and partner with an iconic rock star for its latest collab.

This is a true "OMFG!" moment for fans of Kat Von D's rock 'n' roll style and of Green Day's unforgettable and game-changing punk rock anthems. It's a cultural collision that makes complete sense, especially since Armstrong, with his inky black locks, darkly rimmed eyes, copious tattoos, and edgy style, falls right in line with the brand's aesthetic. It's always a good time when a beauty brand works with an unexpected celeb (and incorporates a man) into the makeup mix.

Here is what the KVDB Insta story reveals: "It's really happening and yes, it's going to be good" reads the caption of one of the posts. Um, duh! There is no way this can't and won't be great for fans of black liquid liner, KVD, and BJA.

Here's what we know, based on the visuals. It's a black eyeliner with Armstrong's signature embossed on the cap in gold. The barrel features "Basket Case," which is one of Green Day's most massive hits, in gold bubble letters. The brand only confirmed that this collab is happening and posted photos of the pair posing for the campaign. Both were wearing all black, of course.

There it is again in black... and white! Further details are TBD as of press time. Bustle reached out to Kat Von D reps for more information.

Here's what we don't know — when it is available for purchase, where it will be sold, and how much it costs. Also, it's not clear if this is a special or limited edition version of the ever-popular Trooper Tattoo Liner. So many Kat Von D-evotees have used Trooper create epic eyeliner looks beyond the wing and the cat-eye flick, from a cupped hand to dripping lips to negative space stars to a mini version of Frida Kahlo. Is this a slightly tweaked version of the brand's black-as-night hero product?

Then again, Von D has been teasing a new version of her infamous black liquid eyeliner, indicating that it would be super matte, long-wearing, and to use her exact language, "bulletproof," further stoking the already blazing hot fire of passion that her customers and fans have for Trooper.

Her wording at the time was careful, suggesting that this would be a new version of the Tattoo Liner, since the notion of tinkering with or changing it struck fear in the hearts of fans. Could Basket Case be the matte edition? There are so many questions about Basket Case and exactly how it will differ from the black liners already in the repertoire, which includes the felt-tipped Ink Liner in Ultra Black.

Patience, Kat Von D-evotees. Your Qs will get As in due time.

Recently, Kat Von D Beauty teased the potential return of Swoon, which is the blood red eyeshadow shade from the Better Together palette. The team didn't reveal too much intel about the possible resurrection of Swoon, other than to say perhaps it was a hint about something in the works. Still, it was enough to get fans all kinds of eager.

In addition to the reprise of a past product, the brand is firmly focused on forward progress with a brand new black eyeliner.

Stay tuned to the brand’s social channels, and to those of Kat Von D herself, for further details about the KVD x BJA Basket Case eyeliner.