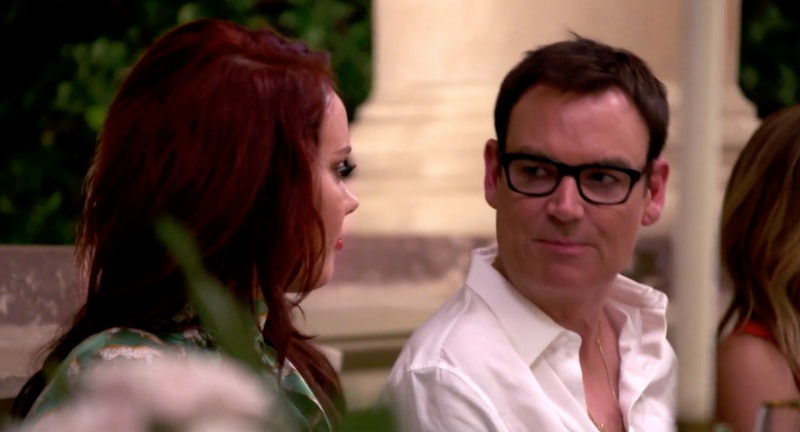 The Southern Charm hookup circles are more like lines because sometimes they just keep going and going. That's probably why even the show's own cast members are speculating about whether Kathryn and Whitney are dating on Southern Charm. Actually Chelsea and Austen just wanted to know if they'd hooked up, but let's talk about that rumor and what it could mean for a larger Kathryn/Whitney longterm relationship. (Not to be confused with RelationShep, Shep's spinoff show.)

In a preview clip for the upcoming Southern Charm Season 6 premiere, everyone is at a dinner party at Patricia's house. Chelsea makes an offhand remark to Austen about what if Kathryn and Whitney got back together. Austen delightedly claims to her that they already have. He claims that Kathryn herself told him that they'd hooked up over the summer. According to Us Weekly, Southern Charm Season 6 started filming in October 2018. That would make the alleged hookup sometime around or after when Kathryn said on Watch What Happens Live in May 2018 that she would "probably not, no" hook up with Whitney again.

If you're like, again? Did they ever hook up at all? Yes. Both Whitney and Kathryn acknowledged on the show that at least one hookup happened around the time the show first started (before Kathryn and Thomas got together), but they had different stories about how long it went on for. Whitney said on the show that it was a "moment of weakness," whereas Kathryn claimed in 2016 on WWHL that "it was more than what was talked about. As in, it wasn't like a one-night mistake, like he said." She claimed, "We were, like, basically together, dating, whatever you want to call it, for about a week-and-a-half, two weeks. But I was staying with him. I was eating breakfast with Patricia."

Whitney's mom Patricia did find Kathryn's stuff in Whitney's room in one flashback clip played in Season 3, but she took to Twitter following Kathryn's WWHL appearance to deny ever having breakfast with her.

By 2017, Whitney and Kathryn seemed to have made up enough that the show wasn't constantly about their drama anymore. During reunion filming for Season 4, the two did an interview with Bravo's cameras joking about their "relationship." "Kathryn and I, we've announced our engagement," Whitney joked. "Yes, Patricia's gonna have a grandchild ... we're all moving in together to Patricia's house," Kathryn added.

That brings us to 2019 (or 2018, which is when the events filmed for Season 6 happened). Chelsea was so curious to know about Kathryn and Whitney's romantic life that she straight up asked Whitney if they'd hooked up that summer like Austen claimed. In the preview clip Whitney becomes visibly flustered. "What … you’re crazy. Why would you even?" Chelsea says that's the word on the street. "I don't know what kind of word you’re talking about," Whitney says. Chelsea asks him why he won't look at her and he answers, "Because I'm uncomfortable." He then turns to Kathryn who asks if he's mad at her because he hasn't really greeted her. He says that no, he was caught off guard because Chelsea's asking if they hooked up. "Oh boy," Kathryn responds.

You can read into that exchange what you will. Chelsea and Austen certainly will. But Kathryn and Whitney aren't confirming or denying anything right now. In fact, Patricia fielded the question for Kathryn during an interview with Entertainment Tonight (oh, yeah, Pat and Kath are friends again).

"This is what Whitney told me," Patricia said. "He said, 'I love Kathryn, we’re good friends, but a southern gentleman would never discuss what he does with a lady.'"

"And a Southern lady does not discuss what she does with a southern gentleman," Kathryn added.

"You’re talking about consenting adults," Patricia said. "So, who cares? My question is, who cares?"

All of this is to say, it wouldn't be surprising if something had happened between the two of them — but don't expect them to confirm anything on camera. As for dating? Whitney seems to look at Kathryn as just a "friend" as Patricia said. But you never know. With T-Rav out of the picture, Whitney and Kathryn could end up being Southern Charm's new item. That is, if Chelsea and Austen's incessant speculation and prying questions don't make things too awkward for them first.