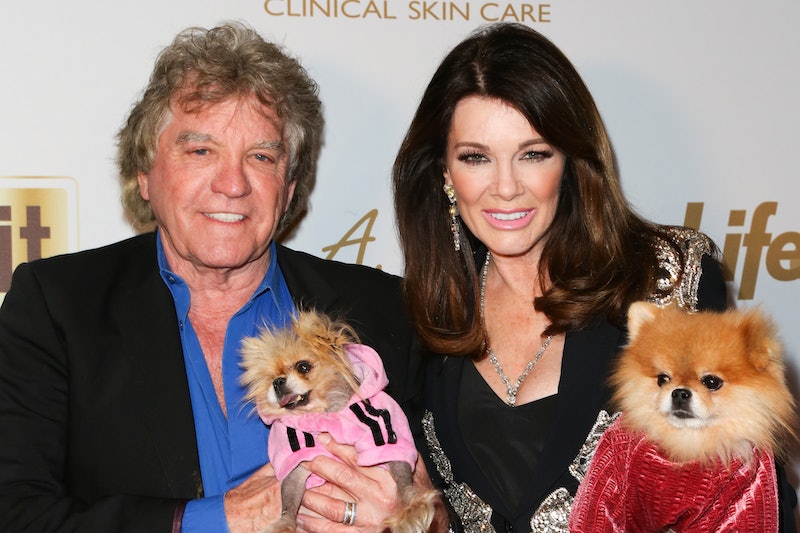 Who would have known that one dog could have ruined so many relationships? Lucy Lucy Apple Juice on Real Housewives Of Beverly Hills started a kerfuffle that Bravo has managed to base a whole season on — Dorit and Lisa Vanderpump fought about Dorit giving up the dog, then Lisa and Kyle fought about Lisa maybe putting stuff in the press about the dog, and now, the men are fighting. Lisa's husband, Ken Todd, and Dorit's husband, PK Kemsley, are on the outs, too, in the name of standing behind their partners.

If you've been watching this season of Real Housewives Of Beverly Hills, you know that the drama isn't exactly about a dog — it's about the way Lisa allegedly tried to orchestrate the drama to make everyone else look bad and her still look good. It's a bigger-picture thing, and of course, the husbands are retreating to the corners of their wives. Ken and PK are friends from back in their England days, but that doesn't mean all that history supersedes marriage. There's been a lot of back-and-forth about this whole thing, but the last argument between the couple seems to have been their last conversation.

On Watch What Happens Live With Andy Cohen, Dorit confirmed that neither she nor PK have spoken with Ken and Lisa since their big blowout. "I didn’t think it would end like that, quite honestly,” Dorit said. It really sucks to end a decades-long friendship over something so trivial, but Ken and Todd are sticking with the wives, and they haven't spoken in months.

Dorit had more to say about her falling-out with Lisa and Ken on the Real Housewives Of Beverly Hills Season 9 After Show. "Both PK and I went there truly with the best of intentions to figure out a way forward. At that point, I just accepted what had been done, and I knew I wasn't gonna receive an apology, and I knew I wasn't gonna receive accountability," Dorit said. "And I had said several times, 'Lisa, let's just put it behind us and let's just figure out a way forward.' And she didn't want to do that." Now, Dorit is firmly planted with the other women, and Lisa is on the outside.

It must be especially hard for PK to give up his friendships with both Lisa and Ken, because the whole time, he was trying to figure out a way to keep all parties happy. It obviously didn't work, though, which is something that Lisa particularly understands — PK can't be friends with Lisa and married to Dorit right now, as Lisa told the Real Housewives Of Beverly Hills Season 9 After Show.

"For [PK] to have a relationship with us would have to maybe have been a problem with his wife, and I don't want that. But he tried," Lisa said. It's true, and it's sad that it all had to come to this. Hopefully, the couples can eventually mend their fences and come back together.