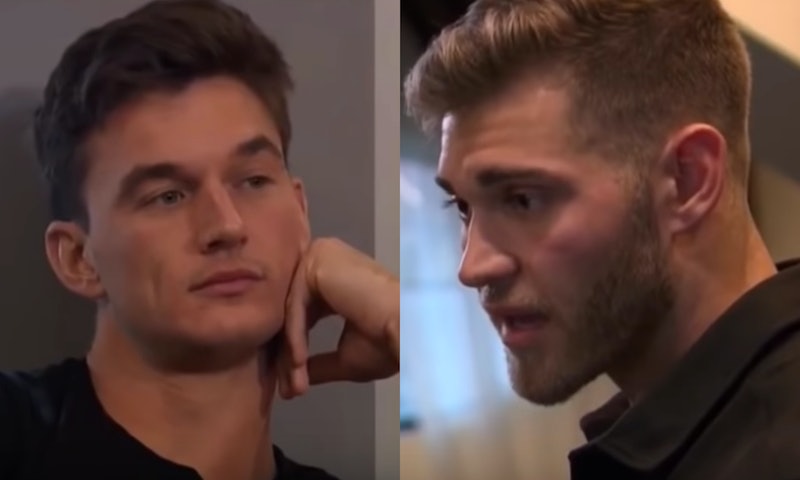 While "not here to make friends" may be the unofficial slogan of Bachelor Nation, few contestants have taken it as seriously as Luke P. His behavior has infuriated everyone this season — even the laidback Tyler C. But is it possible Luke and Tyler C. friends in a post-Bachelorette world? Or did Luke burn that bridge for good?

It's no secret that the "villain" of a Bachelor/ette season is often just the victim of a bad edit — and often, they get on much better with fellow contestants than what we see on-air. Corinne Olympios and Demi Burnett, the "villains" of their respective Bachelor seasons, were portrayed as hated by the other women and virtually friendless. But Corinne and Demi both have close, lasting friendships with other contestants from their seasons, proving just how overblown these in-house feuds can be.

Unfortunately, ABC doesn't seem to have blown Luke and Tyler's fight out of proportion (or maybe they just weren't that close to begin with). Currently, Luke and Tyler don't follow each other on Instagram, the lowest of bars for keeping in touch after filming a reality show together. And it's not that either of them just "doesn't use social media" or haven't thought to follow fellow contestants. Tyler follows Mike, Jed, Garrett, Peter, Conor S., Luke S. — essentially every contestant except Luke P. Luke P., on the other hand, follows almost no one from Bachelor Nation except Hannah and last season's Bachelor, Colton Underwood.

And Tyler isn't just following his fellow contestants on Instagram: they clearly have a friendly rapport going. On Tyler's recent post documenting their group date in Riga, most of the guys pictured (all of whom he tagged, except Luke) left supportive comments. Conor S. wrote "what a guy," Mike wrote "making our lady happy," Garrett wrote "love this post," and Luke S. wrote "the sweetness is giving everyone a cavity." When Luke P. posts group pictures, like the one shown above, he tags no one, and none of the men in the photos comment. Take that as you will.

Clearly, Tyler doesn't have a problem maintaining friendships with the men from his season. It's specifically Luke who has that problem, and it looks like the initial friendliness he shared with Tyler wasn't enough to stay on good terms in the weeks that followed. It's possible that Tyler just needs more time to recover from what transpired during filming. But honestly, that all wrapped months ago — if they're not speaking now, it's unlikely that they'll start.

Sadly, Luke's Instagram presence reveals that he's been isolated from just about everyone who was a part of his Bachelorette experience. Even his post saying he's struggled watching this Bachelorette season wasn't liked by any fellow contestants, or Hannah herself. Given his current behavior, it's understandable that they're not eager to stay in touch. But unless Luke — by some miracle — actually ends up with Hannah at the end of this, it seems like he got nothing out of his Bachelorette experience except 170K Instagram followers and three times as many haters.

If he doesn't win, hopefully his alienation from fellow cast members will be enough to keep him off Bachelor in Paradise. It's one thing to be sad that Luke didn't manage to form real friendships during his time on The Bachelorette; it's another to have to sit through another season of his drama. ABC made that mistake with Chad Johnson and Leo Dottavio, and they shouldn't make it again here.

More like this
Kaitlyn Bristowe Said Chris Harrison Ignored Her After Her 'Bachelorette' Hosting Gig
By Grace Wehniainen
This 'Bachelor' Contestant Got Back With Her Bachelor Nation Boyfriend After Going Home
By Grace Wehniainen
All The Clues Zach & Christina Are Together After 'The Bachelor'
By Grace Wehniainen
Zach Addressed His "Boring Bachelor Energy" After His Group Date With Latto
By Grace Wehniainen
Get Even More From Bustle — Sign Up For The Newsletter
From hair trends to relationship advice, our daily newsletter has everything you need to sound like a person who’s on TikTok, even if you aren’t.