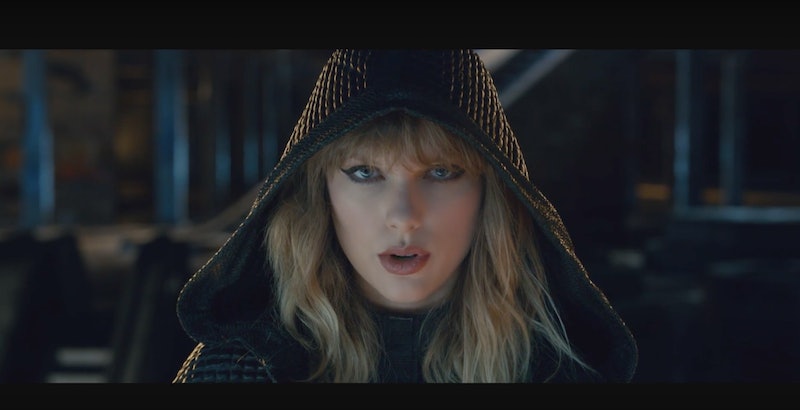 Taylor Swift has released a new music video — cue the mandatory outpouring of theories about what she is and isn't saying. One question that many people are wondering following the release of her latest video is whether Reputation song titles are in the "Ready For It" video — and at least one fan has noticed a few possibilities.

Twitter user @swiftymendes13 has a fascinating theory that fans can start to explore while watching, and re-watching, Swift's new "Ready For It" video, off of the still mysterious Reputation album. Swift has really managed to heighten the mystery on this album from the beginning, first by clearing her social media profiles, posting bizarre snake videos, and then by dropping the "Look What You Made Me Do" lyric video with absolutely no comment. The music video to the same song sent everyone into fits again, when the end of it featured 15 Taylors arguing with each other. Some fans thought that each Taylor represented a different song on the upcoming album, a theory that could still hold water now, two months later. If this latest theory about "Ready For It" is true, then Taylor could have just dropped more clues about what fans can expect to see on the Reputation album — because song titles from the album might be hidden in the "Ready For It" video, in the form of blurred graffiti.

The potential song titles that this Twitter user has noticed are "All Eyes On Us," "Ur Gorgeous," "This Is Enough," and "I Love You In Secret." While we still only have three songs from Reputation released, one of them could help to confirm this theory. There is a song entitled "Gorgeous," the music video for which has yet to be released. We don't really have any more hints about what the names of the still unreleased tracks are, but we'll find out soon enough, as the album's release date is Nov. 10.

Fans have noticed many parallels between the "Ready For It" video and other videos from Taylor's past, which could seem to confirm the fan theory about the 15 Taylors — even if "Ready For It" doesn't seem to refer to any specific Taylor in particular. For example, people have noted that the cyborg Taylor in the video isn't the first Taylor to have appeared on a white horse; she's done that in previous videos, like the "Blank Space" video off of her 1989 album.

We also know that "Ready For It" will be the first song on the album, so it could make sense that the video would be laying the stage for everything to follow. Some easter eggs in the video definitely refer to other things we already know about the album — "year of the snake" in Chinese lettering, referring to the snake theme Swift launched before "Look What You Made Me Do," for example. Also, the cyborg Taylor does seem to defeat — perhaps even "kill" — the other Taylor in the video. Could the Taylor dressed in black perhaps be the old Taylor who "can't come to the phone right now" because she's dead, as the now infamous line in "Look What You Made Me Do" says?

Two weeks before the album release may seem like an eternity for Swift's most dedicated fans, but at least this latest album has given people plenty to consider in the meantime. Whatever else it says or doesn't say, it's clear that Swift is certainly going in a different, edgier direction than she has in the past. And judging by the hype she's managed to whip up so far, people like that direction.