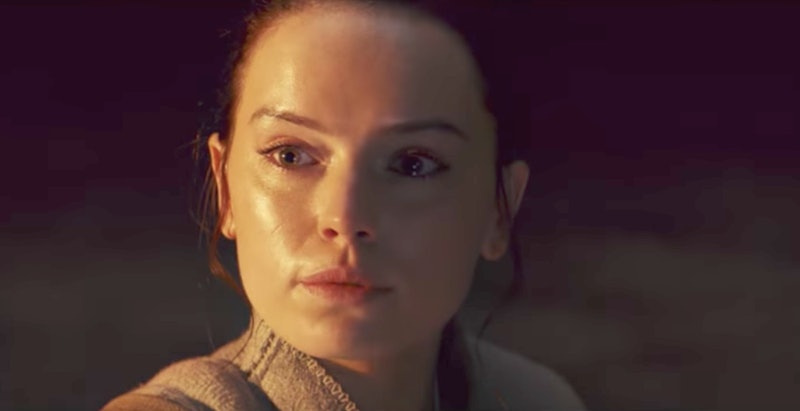 The battle between the light and the dark side is on full display in the full Last Jedi trailer. It should come as no surprise that the teaser for Star Wars Episode VIII leaves fans with more questions than answers, but the most important one might be whether or not Rey and Kylo Ren are working together in The Last Jedi. From the looks of the trailer, there does appear to be a connection between the two that should frighten everyone in both a galaxy near and far, far away.

In Star Wars: The Force Awakens, the two characters seem to be on opposite sides of the spectrum. Rey is a new hope who seems to possess the Force but doesn't know what to do with it. Meanwhile, Kylo Ren wants to be the next Darth Vader. We already know that he has some Vader in him since his mom is General Leia Organa, making this all the more plausible.

But, in this trailer, Rey seems willing to work with Kylo Ren. With tears in her eyes, she appears to ask the First Order baddie for help. "I need someone to show me my place in all this," she says before the trailer cuts to a final shot of Kylo Ren reaching out his hand, perhaps offering her a spot by his side.

Now, is this just clever movie magic or will Rey and Kylo Ren be teaming up in this new sequel?

To figure this out, we need to little closer at that final shot. Rey seems to be in a dark place with a glow that seems to be hitting her face, perhaps from a fire. Kylo Ren, on the other hand, is surrounded by burning embers that make no appearance in the shots of Rey. So it does appear as if these two may not be in the same location when this supposed conversation takes place.

It's likely that Rey is speaking to Luke at Ahch-To, the site of the first Jedi temple when she asks for help in trying to understand where she came from. But, that doesn't mean Rey couldn't decide to align herself with Kylo Ren before the movie is over. From the trailer it's clear Luke is apprehensive to take on the Yoda role and his pushback could lead Rey on a dark path. As she says in the trailer, "Something inside me has always been there, but now it’s awake,” which doesn't necessarily sound like a good thing.

It's assumed that when Supreme Leader Snoke is heard saying he saw “raw, untamed power” and “something truly special” in this trailer, he's talking about Kylo Ren, but what if it's Rey? Rey's parentage is still a question as we head into this new chapter and her supposed willingness to side with Kylo Ren could be a sign of where she came from.

Especially since The Force Awakens ends with Kylo offering to teach Rey the ways of the Force. It's an offer she does refuse, but if Luke doesn't want to teach her, she could be willing to rethink things.

While Rey can clearly handle a lightsaber — just check out that training montage! — she also has power that even Luke is surprised to see. While training she manages to put a crack in the earth below her that shocks Luke. “I’ve seen this raw strength only once before,” Luke says, presumably talking about Rey. “It didn’t scare me enough then. It does now.”

As Vulture points out, it's likely that Luke is talking about Kylo Ren, previously known as Ben Solo, who burned down his Jedi school. That power shocked Luke into becoming a recluse. Luke's fear of what Rey is capable of could lead her to go to the First Order looking for help. A clearer sign that this could be the case? Luke warning, “This is not going to go the way you think" before Rey is seen being possessed by Snoke who is screaming "Fullfill your destiny!"

Of course, it doesn't mean Rey's gone bad, she may have a bigger plan to take the First Order down from the inside or Kylo Ren could be using her for his own redemption. She also may just wants answers and you can't blame the girl for wanting to know her past. After all, Lucasfilm already confirmed the connection between Rey and Kylo Ren, but what exactly that connection is remains a mystery.

Fans want to know exactly what the relationship between Rey and Kylo Ren will be. Unfortunately, all of us will have to wait until December 15 to find out what it is and how it will affect the Star Wars universe.