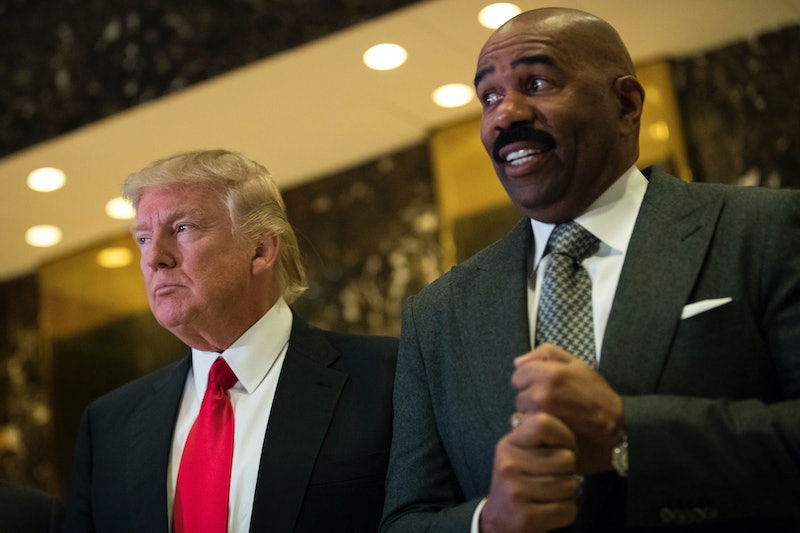 Broderick Steven Harvey aka Steve Harvey aka the heavily-mustachioed host of Family Feud materialized at Trump Tower on Friday. Yes, game show host and comedian Steve Harvey met with Donald Trump. I've stopped trying to understand what is happening to American democracy. But why was Harvey there? Are Steve Harvey and Donald Trump friends? The two don't seem to have any previous history with one another, besides that shared Miss Universe connection.

Though Harvey called Trump "congenial and sincere" on Twitter after meeting with him Friday, he has voiced differing opinions on The Donald in the past.

In an interview with The Daily Beast back in February 2016, Harvey was just tickled by the idea of Trump as a candidate, and said that the President-Elect was "very entertaining to him." Well that makes sense, because he's a reality star, not a political candidate. Or so we thought! "I like him, personally. I do! I think he's exciting for politics," Harvey said. "Politics haven’t been this exciting in a long time — or as confusing, ever, in the history of it. I think Donald Trump not being a politician is making a lot of people nervous who are politicians.”

He went on to say,

"He uses words that politicians aren’t supposed to use. He called everybody up there stupid the other day. ‘You’re stupid.’ I didn’t know you could say ‘stupid’ as a politician! As a comedian, it works just fine. I’m endorsing him for making this fun to watch, but I’m not endorsing Donald Trump."

Even though he might not have been endorsing him then, he's supporting him as of Friday. According to the Huffington Post, Harvey will join Ben Carson on an urban housing initiative. According to the site, Harvey told reporters at Trump Tower that he was introduced to Carson. "We’re gonna team up and see if we can bring about some positive change in the inner cities, which I felt was my only agenda, and he agreed," Harvey said.

But not too long before their meeting, Harvey was in awe of the PEOTUS' behavior on Twitter. After one particular scathing performance by Alec Baldwin impersonating Trump on Saturday Night Live, Trump, of course, unleashed his rage in a series of tweets. In an appearance on The View on Dec. 5, Harvey made clear his shock that Trump had time for that.

Before Friday, it seemed the only place that Trump's and Harvey's paths crossed was the Miss Universe pageant — and even then, barely. Harvey, who hosted the 2015 Miss Universe pageant, infamously flubbed reading the winner's name, announcing Miss Colombia Ariadna Gutiérrez as the winner instead of the actual winner, Miss Philippines, Pia Alonzo Wurtzbach. Trump tweeted about the incident, of course, calling it "very sad," and saying it never would have happened had he still owned the pageant.