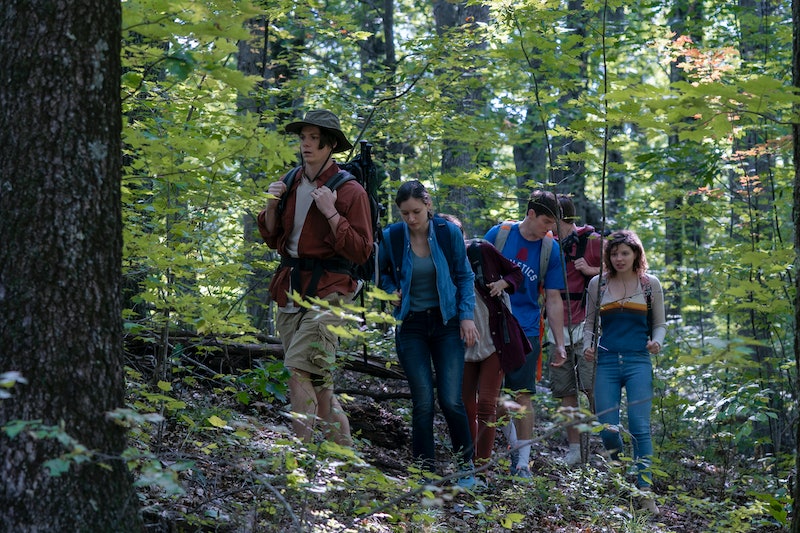 Spoilers ahead for Season 1 of The Society. The Society spends its first season focusing more on its central teenagers building a new society from scratch and less on the nitty gritty details of what exactly led them to that situation. After blowing through the first 10 episodes, there are still so many unanswered questions about what happened to the kids on The Society. Are they dead? Are they in some weird kind of purgatory, or perhaps another dimension? Will we all still be arguing about this in 10 years à la Lost? Someone please help.

In the show's first episode, a group of high schoolers leave their well-to-do town and head on a weekend trip in order to escape a suspicious smell that's settled over the town. However, the trip is abruptly cut short for mysterious reasons, and they return home to find their town empty — their parents, and everyone else who lived there, is gone. Cell phone data and internet are down. Cable TV doesn't work. Even calling 911 is a no-go. It's very spooky.

Even worse? When a few of them try to take the highway to a neighboring area and seek help, they find that a thick forest has sprouted up seemingly overnight, blocking all routes out and making it seem as though they're the only people left on the planet. Even a high-flying drone can't spot any civilization in the distance. So what's the deal?

Before long, the teenagers start to create a makeshift government, which includes a "Committee on Going Home." The committee's job is to try and figure out exactly where they are, and they eventually come to the conclusion that they might be in some alternate universe. They base this hypothesis on a few things: stars in the sky are just a few degrees off from where they should be on Earth, solar eclipses have happened when they shouldn't, and no man-made satellites can be spotted through the telescope.

This suggests there could be a bizarre yet scientific explanation for everything, and that the group is still alive and well, just in the wrong place. But then, the season finale shakes things up and throws a few holes into that theory. In the last few minutes of Season 1, The Society flashes to another reality, where adults are still around, and the kids, it seems, are not. A plaque reading "We Remember Them" lists all the names of the teenagers who left for the trip, while adults and children wearing commemorative yellow ribbons gather for a reading of Peter Pan. OK, we're adding some Leftovers vibes to the Lost vibes.

Apparently at least in one reality, the kids of New Ham are thought to be dead or missing. This isn't completely surprising, no matter how bananas it seems. There are plenty of biblical nods peppered throught the show that suggest they all might be in some kind of strange afterlife.

There was a bible passage graffitied on the school's wall before they left for the school trip. In Hebrew, it read, "You've been weighed in the balance and found wanting." The group has consistently gathered in a church as their meeting place, often with full-on sermons delivered by Helena. And when Becca had her baby, she named it Eden. These nods to religion and a possible afterlife definitely don't seem coincidental, but right now, it's too soon for a definitive answer about where they are or how they got there. And depending on the future of the series, it could be seasons before we, or the residents of New Ham, start to figure things out.

It's still possible that the kids are in an alternate, sci-fi-esque reality, and are only presumed dead because they disappeared without a trace. It's also possible that this is some elaborate set-up or social experiment orchestrated by the government, or even their parents. The adults seen arguing in the series premiere were very cagey about what exactly they were talking about, and it's not out of the question that the New Ham kids are being watched and studied. Regardless of if they're dead or alive, the teenagers had better make it out of this limbo quickly, before things get even worse than they have already.

More like this
Devi Is Going To Meet A “Smoldering Bad Boy” In ‘Never Have I Ever’ Season 4
By Jack Irvin and Gabrielle Bondi
‘The Ultimatum: Queer Love’ Is Officially On The Way
By Radhika Menon and Kadin Burnett
If 'Entergalactic' Season 2 Happens, You Could Get A New Kid Cudi Album
By Kadin Burnett
Jeffrey Dahmer’s Arresting Officer John Balcerzak Got His Job Back After Being Fired
By Grace Wehniainen
Get Even More From Bustle — Sign Up For The Newsletter