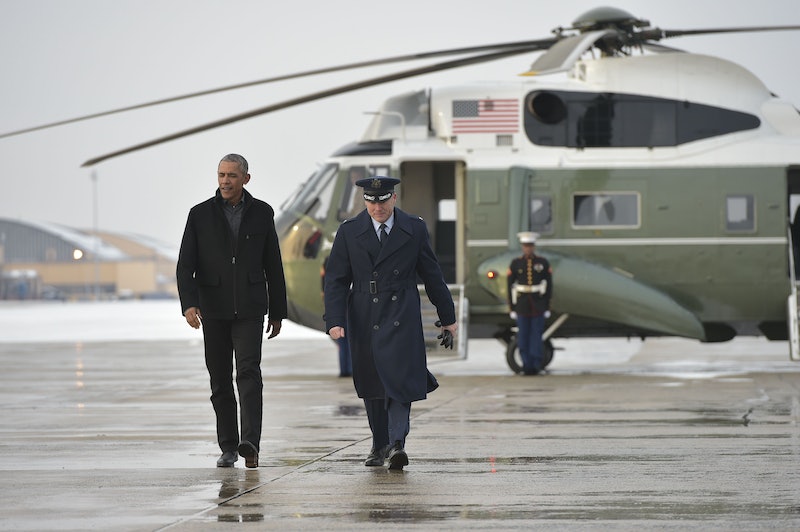 The stage is set, the guests have arrived, and Donald Trump will soon be inaugurated as the 45th President of the United States. As is customary, President Obama will be in attendance — will the Obamas be in Air Force One on that day?

According to the New York Daily News, the Obamas will take one last flight on the plane after the inauguration. But while it'll be the same aircraft Obama has been using for years, the Obamas won't technically be riding on Air Force One. That's because "Air Force One" is a designator used to refer to the plane carrying the president of the United States — and by then, Obama won't be president anymore.

Obama's use of Air Force One has been a source of controversy in conservative circles. In October, a meme circulated claiming that it cost U.S. taxpayers $200,000 per hour for Obama to fly on Air Force One while campaigning for Hillary Clinton. This amounted to "fraud, waste and abuse of taxpayer money," the meme claimed.

More importantly, though, the cost per hour isn't a helpful number to look at if one is attempting to gauge the economic efficiency of Air Force One usage. This is because it takes into account not just Air Force One's fuel costs, but also its basic maintenance and upkeep, which have nothing to do with how often or why the president uses the plane.

The number is additionally misleading because the cost per hour is calculated by dividing the total cost of maintaining and operating the aircraft by the number of hours flown. This means that paradoxically, the cost per hour actually decreases the more frequently a president uses Air Force One.

Lastly, the cost per hour of operating Air Force One has decreased under Obama, according to numbers provided by the Air Force. In any event, there's no law against presidents using Air Force One to attend campaign events, so Obama doing so certainly did not constitute fraud.

In December, Trump sent a tweet riddled with inaccuracies in which he criticized the cost of replacing the current pair of Air Force One jets. Trump claimed that Boeing was set to spend more than $4 billion building a new 747 jet to be used as Air Force One. In actuality, though, the cost hasn't yet been set, as Congress still needs to approve funding for the project. Furthermore, the final price tag will be for two additional 747s, because the government keeps two jets on hand in case one is out of commission for one reason or another.

Obama has made his love for Air Force One clear. When asked in 2015 to name the biggest perk of being president, he responded, "number one is the plane."