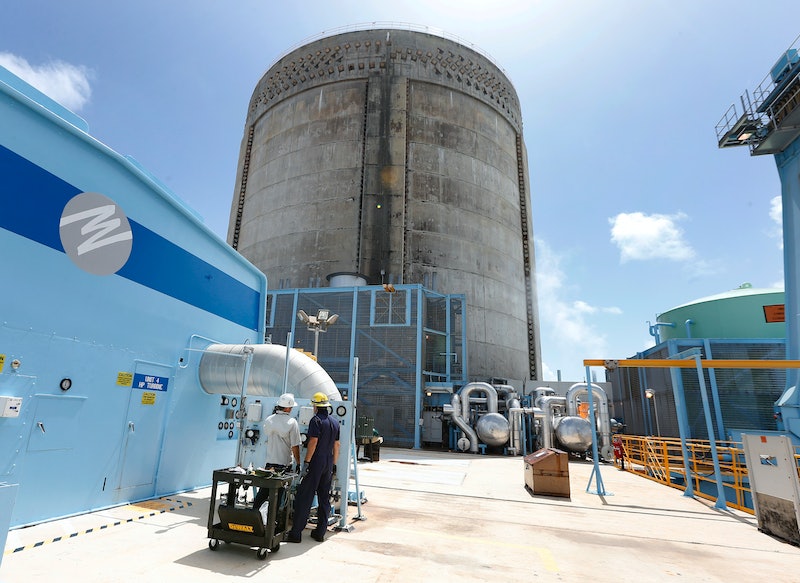 On Wednesday morning the Category 5 Hurricane Irma made landfall in the Caribbean on the island of Barbuda. With maximum sustained winds of 185 mph, Irma is the most powerful hurricane recorded in the Atlantic Ocean, one that is heading directly toward Florida. In anticipation of the hurricane to hit as early as this weekend, Gov. Rick Scott issued a statewide emergency. Depending on the path of the storm, two main Florida nuclear plants may close because of Hurricane Irma.

Peter Robbins, the spokesman for Florida Power & Light’s two nuclear plants told the Miami Herald that shutting down a nuclear reactor is a gradual process. Therefore, if they decide to close down because of the storm, the move won't be a split-second decision. On Wednesday, both the Turkey Point and the St. Lucie plant focused on cleaning the grounds and nailing down staffing plans.

However, as of Thursday morning, a final decision was yet to be made about the two plants closing down for the weekend. They both "If we anticipate there will be direct impacts on either facility we’ll shut down the units," Robbins told reporters.

It should be noted that both of the plants have been designed to withstand Florida's hurricane season, and they have both withstood strong storms in the past. The Turkey Point plant survived the Category 4 storm Hurricane Andrew back in 1992, which to date marks one of the strongest hurricanes the country has seen.

Likewise, the St. Lucie nuclear plant survived the Category 4 Hurricane Frances back in 2004, then subsequently weathered the Category 5 storm Hurricane Wilma in 2005. Needless to say, the plants have been specifically designed and built to survive extreme weather, and not present danger to surrounding communities. However, none of these past storms were as strong as Hurricane Irma.

While the plants have not began the process of shutting down at the time of writing this, they still have ample time to make the decision. In an email to Reuters, Robbins shared that the plants would likely begin shutdown before Saturday, or early Saturday — if that decision is made.

"Based on the current track, we would expect severe weather in Florida starting Saturday, meaning we would potentially shut down before that point," wrote Robbins. While the factors vary, the timeline for gradually cooling down a nuclear reactor is a few hours, normally less than 24.

While the trajectory of Hurricane Irma could shift at any given point in its path, Florida is bracing for a storm which could be even more devastating than Hurricane Harvey, which wreaked havoc on Texas mere weeks ago. As the Florida Power & Light's attention to Irma indicates, the Sunshine State — although used to being battered by hurricanes — isn't taking any chances this time around.

More like this
6 Organizations Fighting Police Brutality That You Can Support Right Now
By Syeda Khaula Saad and JR Thorpe
This Is When Netflix Is Going To Start Charging You For Sharing Passwords
By Darshita Goyal
Twitter Has *A Lot* To Say About The "Single Penalty”
By Sam Ramsden
Watch Jacinda Arden’s Devastatingly Honest Resignation Speech
By Sam Ramsden
Get Even More From Bustle — Sign Up For The Newsletter
From hair trends to relationship advice, our daily newsletter has everything you need to sound like a person who’s on TikTok, even if you aren’t.