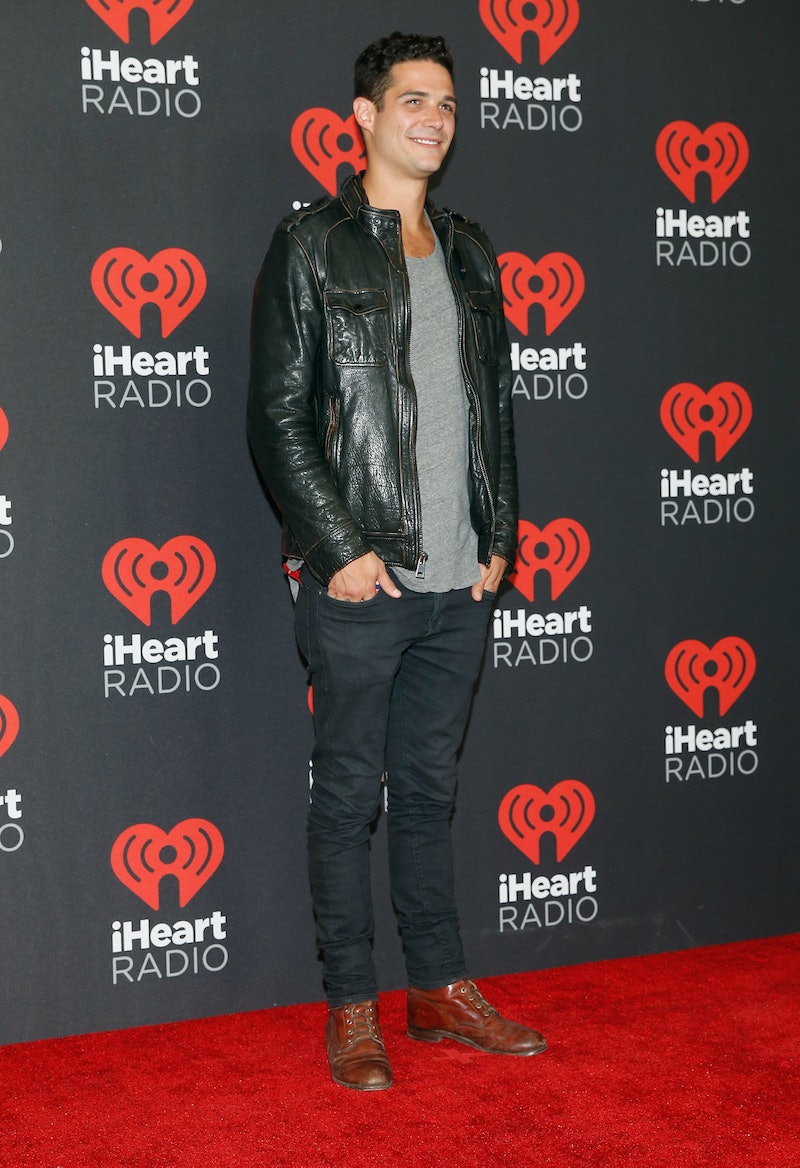 Apart from movie marathons and bulk candy, the best part of Halloween is seeing what costumes celebrities dress up as for the occasion. Some celebs even dress up together as a pair. One such joint Halloween costume has fans speculating if Wells Adams and Sarah Hyland are dating. The Bachelor fave and Modern Family star posted a photo of their super cute Halloween costume to Instagram — he's Eleven from Stranger Things and she's Dustin — and it has fans of both series scrambling to figure out the truth.

Neither Adams or Hyland confirmed anything publicly about a potential romance, but an unnamed source recently told People that they're "hanging out." Interpret that as you will. Another unnamed source has told Us Weekly that Adams and Hyland have been "seeing each other for months." But still, that isn't an official confirmation. Let's focus on the facts, shall we? Hyland and longtime boyfriend Dominic Sherwood broke up sometime in Summer 2017. Since then, she's lamented single life just like any other 26-year-old. On Twitter, she politely declined a fan's suggestion that she join dating apps. "I like the natural progression of a person slowly learning I'm crazy," she tweeted, jokingly.

Adams, meanwhile, has searched for the right woman on reality TV. He appeared on JoJo Fletcher's Bachelorette season and he replaced Jorge the Bartender on Bachelor in Paradise. Adams' charming sense of humor has made him a beloved member of Bachelor Nation. Fans of the franchise have pushed for him to become the next Bachelor, but Adams isn't the Bachelor; Arie Luyendyk, Jr. is. During Bachelor in Paradise, all signs were pointing to Adams potentially dating fellow contestant (and longtime pal IRL) Danielle Maltby. Suddenly, Hyland posts a picture on Instagram of herself joint costume with Adams and what is life.

Hyland's caption for the snap: "#strangerthings have happened #happyhalloween." Actually, this pairing wouldn't be too strange at all. Perhaps Hyland and Adams met through mutual ABC connections, since both The Bachelor franchise and Modern Family air on the network. So, this is not a couple's costume, per se. Hyland is clearly channeling Stranger Things' Dustin Henderson, with Adams as an enraged Eleven. Nosebleed and all. A more classic couples costume from the show might be Eleven and Mike, or Joyce Byers and Chief Hopper, or an actual couple from the series, like Steve Harrington and Nancy Wheeler. Hyland is petite, and could have pulled off a Mike Wheeler costume just as well as she pulled off Dustin.

Maybe Eleven and Dustin are just their favorite characters from the show. Hyland and Adams could just be a couple of pals goofing around, and she is rocking that Dustin costume. Plus, Adams is still hot AF, even when dressed like a supernaturally powerful child.

But wait, what does Maltby think about all of this? According to her IG account, Maltby dressed up as Dolores Abernathy from Westworld. Her photo has a similar backdrop to Hyland and Adams' photo — could this mean they were at the same party? How come Maltby didn't join in on the Stranger Things costume fun?

Adams hasn't posted anything about his or Hyland's costumes to his Instagram page, and Hyland's photo caption wasn't noticeably cutesy, which might indicate that they're just friends. But they could also be trying to keep their potential budding relationship private for now, which they have every right to do.

For right now, it's safe to assume Hyland and Adams are friends who hang out at Halloween parties. They also seem to have same good taste in Netflix series. As for them being the next ABC power couple, we will have to wait for confirmation from Hyland and Adams themselves.