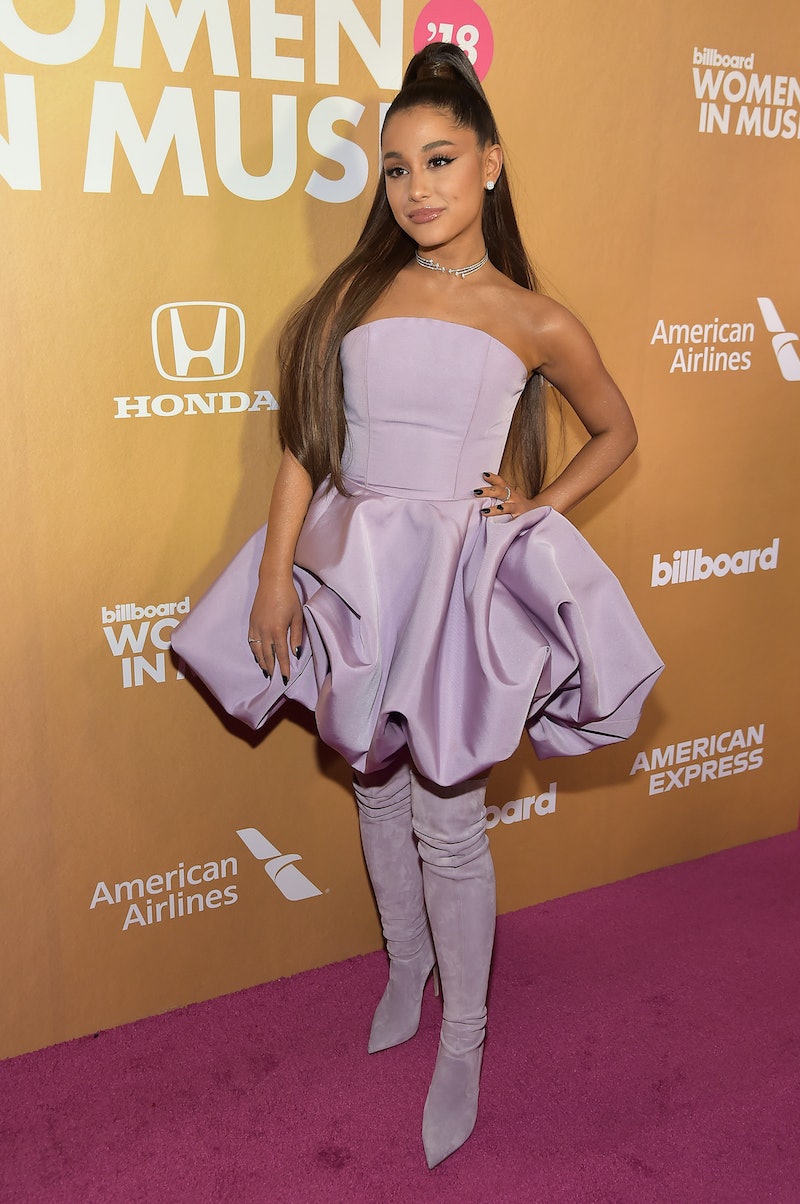 As Billboard’s Women in Music Woman of the Year honoree and the most followed person on Instagram, there’s an expectation for this lady to wear show-stopping looks on and off the red carpet. But Ariana Grande’s Billboard Music Award outfit was bolder than any one of her fans could have imagined.

The singer didn't walk the red carpet — or even actually attend the show — but when it was time for her performance to air, she came decked out in an all pink ensemble from the Sweetener World Tour. On more than one occasion, Grande has done her outfits even bigger than the height of her iconic updo, and this jaw-dropping silhouette is one of many greats.

Ari’s iconic cat eye liner? Check. The ponytail? Check, check. And when it came to the clothes, Grande wore a gorgeous pink three-piece outfit featuring a top with puffer sleeves and a skirt with an opening at the front to reveal Ari's bikini bottoms, making this outfit all the more awe-worthy for Arianators.” Along with the statement dress, she wore a pair of stud earrings and some off white, thigh-high boots to offset the rest of the look. And while we all know the singer has donned some pretty stellar looks in the past, Grande has topped herself, yet again, in this pink, puffy dream.

But her performance wasn't the only highlight of the night. The “7 Rings” singer was blessed with nine Billboard Award nominations this year in categories for Top Female Artist, Top Artist, Top 100 Artist, Top Social Artist, Top Radio Artist, Top Streaming Artist Top Billboard 200 Artist, plus Grande was also up for the Billboard Chart Achievement Award.

In previous years at the Billboard Music Awards, Grande’s apparel has included a futuristic geometric print gown from Atelier Versace with a high side slit as well as an all black poofy halter dress that she wore for her performance of "No Tears Left To Cry" at last year's show.

And although Grande didn't wear this next outfit to the actual Billboard Music Awards, one other honorable mention of Grande's Billboard looks is the short "loofah-like" purple dress designed by Christian Siriano that she sported when receiving the Woman of the Year Award for Billboard's Women in Music Awards in 2018. Not to mention, she wore a pair of unforgettable thigh-high purple suede stilettos to match.

But the Billboards aside, fans who've bought tickets to see Grande during the Sweetener Tour are likely not only anticipating another glass-shattering performance from Grande's whistle register range, but also what else she will be wearing on-stage at each show.

Fans had already been speculating whether or not Grande would wear the same pink doll look she wore while on tour, and she confirmed on Wednesday that the all pink outfit was (virtually) here to stay. Billboard confirmed Grande's performance of her "7 Rings" single in collaboration with T-Mobile, who's brand is conveniently ridden with pink promos.

Whether or not Grande shows up in something pretty and pink or something as loofah-looking as her past red carpet looks for her next show, whatever it is will certainly be fit for a goddess like Ari.