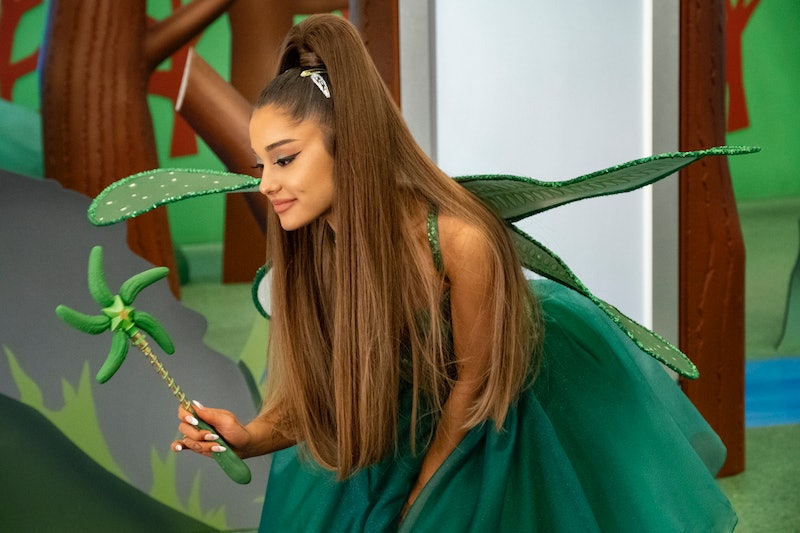 On Sunday, Feb. 23, Piccola Grande, the Pickle Fairy of Hope blessed the world with two new Ariana Grande songs in Showtime's Kidding. (Well, sort of.) The Jim Carrey tragicomedy follows the downward spiral of Mr. Pickles, a Mr. Rogers style children's TV host, as his family crumbles after a devastating loss. This week's back-to-back episodes included a special outing that played out like a real episode of the in universe show Mr. Pickles' Puppet Time — with Grande as a special guest.

The "Thank U Next" singer channeled her Nickelodeon roots to play the graceful and wise Pickle Fairy of Hope, and she served up two vastly different performances in the process. Grande's first song found her singing along with Carrey and Catherine Keener on "Stick Together," a cheerful bop about relying on the people around you to help during times of need.

Directed by Michel Gondry of Eternal Sunshine of the Spotless Mind fame, the segment is as wonderfully strange as fans of the director would expect. In one moment, Carrey, Keener, Grande, and assorted puppets sang "Stick Together," as they repaired various broken barrels and wells with glue.

The entire experience was a dream come true for Grande, who is a self-professed Carrey super fan. In a July 2019 Instagram post celebrating her guest appearance on Kidding, the singer wrote, "nothing is crazier than getting to work with and spend time with someone whom you’ve idolized and adored since before you could speak. actually, what’s even crazier is discovering that person to be more special and warm and generous in person than you ever could’ve imagined."

As much fun as the first song is, it's the second song that taps into Grande's ability to produce an emotionally resonate moment for the show and listeners. In "This Is For the Best," Grande sings a short, but moving ballad about letting go that ultimately leads Mr. Pickles to realize that the only way forward is for him to accept that he and his wife should go through with their divorce. The emotional scene is made all the better thanks to Grande's performance. There's no word yet on whether or not Showtime plans to release either of the songs, but a full-length version of "This Is For the Best" would be a gift for fans of the "Sweetener" singer.

Grande posted about her appearance on Instagram, alongside a clip of her singing the powerful ballad that gives Mr. Pickles strength. She captioned the post, "maybe getting back up again is what falls are for."

Kidding showrunner Dave Holstein knew the pop star would nail the emotional moment, which is exactly why he asked her to be in the show's special episode. "She just has this crushing emotional voice, which fit our show so well," he told Mashable in a post-episode interview. "Her voice, especially in the right context, really accesses that part behind your eyes that decides whether or not you cry. We wanted to take full advantage of that, especially to emphasize the beauty in Jeff’s world."

And there's still more Grande to come before the end of the season. In the same interview, Holstein revealed that the singer will team with Ke$ha for a special cover later in Season 2. There's no word yet on what the song will be, but if it's anything like the Pickle Fairy's first two performances, then it will be a must-see TV moment.