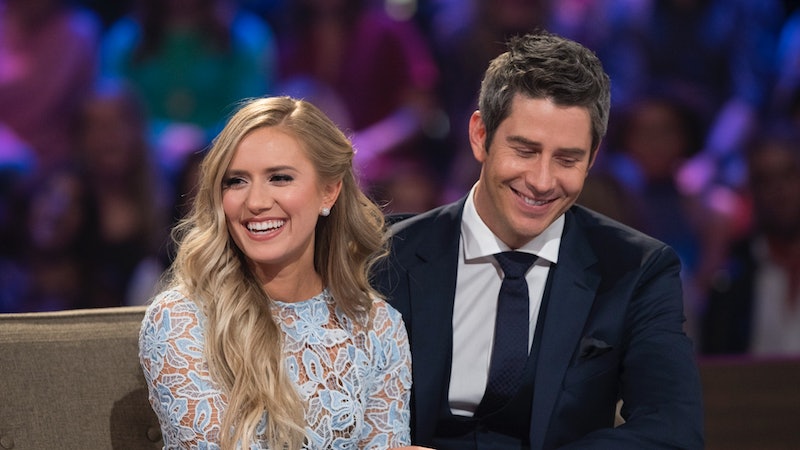 Arie Luyendyk Jr. and Lauren Burnham met when he was handing out roses on Season 22 of The Bachelor. Now they're handing baby bottles and toys to their baby girl. It's officially official: On May 29, Bachelor alums Arie and Lauren welcomed their first child together, as announced on Arie's Instagram Stories. "We have a health, BEAUTIFUL baby girl," Arie wrote in the IG story with a heart emoji. "Mommy and baby are doing great, we are so incredibly happy."

The new parents have not revealed their baby's girl name yet, but they have had it picked out for a while. According to a March article from Us Weekly, Lauren posted about her daughter's name in an Instagram Story. She told her followers, "We’ve had her name picked out since Christmas!" She also mentioned, "We think it’s beautiful and unique. We’ve never met anyone with her name."

The timing of their daughter's birth this isn't super surprising to their fans. The Arizona couple has been very open about their baby journey, even documenting their trip to the hospital.

Aside from posting on their own social media accounts, they even created an Instagram account for their daughter before she was born. From those three accounts, they have shared many updates, including pictures and videos from the hospital the night before their daughter's delivery.

On May 29, Arie shared a photo of himself and Lauren in a hospital gown standing in the hospital hallway during one of their last moments a family of two. He captioned the photo, "IT'S HAPPENING!"

The baby's Instagram account shared a picture of Lauren in the hospital hallway sipping on a drink with the caption "Is it time yet?" Just about.

Both Arie and Lauren shared videos from the hospital leading up to their baby's birth on Instagram Story. Along with a solo photo of Lauren, Arie wrote, "look at this beautiful mama."

Lauren also posted a photo of Arie kissing her baby bump while she waited to give birth.

Then the updates got even more specific with Arie mentioning that Lauren's contractions were just two minutes apart.

Around 5 a.m., Arie stopped posting pictures and wrote a note about his wife receiving an epidural, anticipating their daughter's arrival in the near future.

Life is really moving fast for Arie and Lauren. The two of them got engaged in March 2018 during the live After the Final Rose episode of his Bachelor season.

In November 2018, the couple revealed her pregnancy in an interview with Us Weekly. In that article, they predicted how they envisioned themselves as parents.

Arie imagined that he would be "such a softie" with their child. In contrast, he said, "Lauren is a little bit more of the disciplinarian." However, it should be noted that Arie also said, "We’re kind of basing it off of how we parent our dogs!"

On Jan. 4, Arie and Lauren announced they were expecting a baby girl with a photoshoot published by Us Weekly. Lauren admitted to the magazine, "I think, to be honest, in the beginning we were both hoping that we were having a girl."

However, it wasn't that simple. Lauren divulged, "We actually did the early gender test online, so we took our test at 10 weeks." She added, "We got the results back from that, and it was that we were having a boy." A subsequent doctor's visit revealed they were actually having a daughter.

Then on Jan. 12, Lauren and Arie got married in Hawaii. Bachelor host Chris Harrison officiating the ceremony. Fellow Bachelor couple Sean and Catherine Lowe attended the wedding. Sean and Arie met back in 2012 when they were both on Emily Maynard's season of The Bachelorette. Additionally, contestants from Arie's season were on hand for the big day, including Seinne Fleming, Maquel Cooper, Jenna Cooper, Jacqueline Trumbull, and Marikh Mathias.

On April 27, the Luyendyks celebrated their child's impending arrival with a baby shower at their Arizona home. Us Weekly even confirmed that they had an ultrasound machine at the party. How festive!

Then on May 8, Lauren shared her frustrations with her social media followers when she found out her baby was in a breech position. According to Us Weekly, Lauren discussed her reluctance to have a C-section during an Instagram Live video. She shared,

"I didn’t really want to be on any kind of drugs that would alter my state of mind and when you have a surgery like a C-section, that’s something that’s almost necessary because it’s painful to do without them. So I’m a little upset about that."

Now that their baby girl is here, the Luyendyks are adjusting to their new lives as a family of three. They have been very open about their relationship and their journey to starting a family, so expect more updates from the Bachelor family in due time.