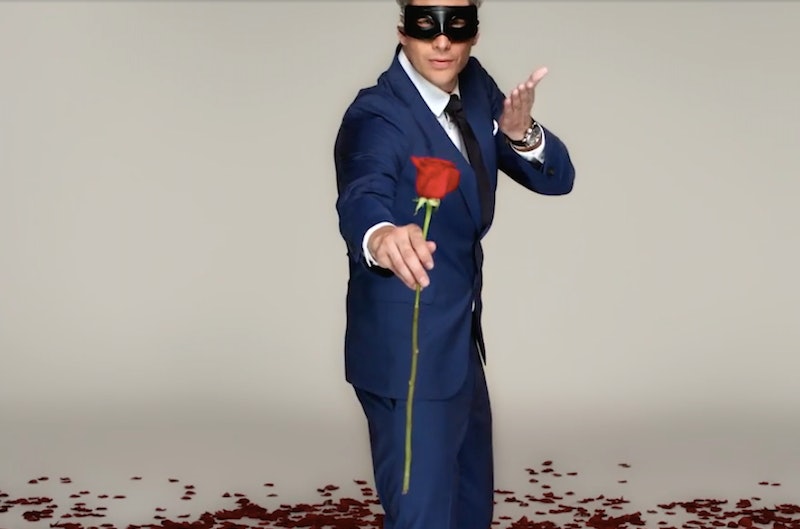 As we continue the countdown to the next season of the Bachelor, our wait is made that much harder by all the silly (though vague) promos that we've received. Arie Luyendyk Jr.'s Halloween Bachelor promo, for instance, is here just in time for the holiday, and it's as short and sweet as the other clips. And "sweet" here means "centers around a cheesy joke" that you're either going to laugh at or with. Probably "at," because this thing is seriously something else. But, hey, who would want a Bachelor teaser any other way?

On Friday, People shared a first look at the Halloween-inspired promo for Arie's upcoming season of The Bachelor, and it really is a delight. The clip begins with a declaration: "This Halloween, there's only one question." And, no, that one question is not, "Can I steal the candy bowl for a second?"

The promo cuts to Arie standing in an all-white room next to a pumpkin basket. The pumpkin basket is perched atop two pillars of foliage, and its handle is bedecked with a string of purple lights. It sort of looks like the pumpkin basket has sprouted two very long, very leafy legs. There's also some stuff in the basket, maybe a bunch of Ferrero Rocher chocolates? Or foil-wrapped chocolate pumpkins? Or dozens of bath beads that were made to look like miniature jack-o'-lanterns? Or bouncy balls?

Whatever's happening, the whole thing looks like a piece of decor from The Sims, which is a genuinely high piece of praise. Only a boring Sim wouldn't shell out hundreds of Simoleons for this beauty.

But before anyone can make sense of the two-legged pumpkin basket creature, Arie takes a bath bead out of its hollowed-out center and asks the question that is apparently the only question that exists this All Hallows' Eve: "Trick or me?" Yes, this Halloween, Arie is the treat. You heard it here.

And then, the pumpkin basket creature disappears? And then, there are three Aries on the screen? And then, there's some lightning? And then, Arie's in a Zorro mask and blowing a kiss and presenting a rose to the camera? Ah, yes. All of that happens and everything about it is perfect. The short video is truly satisfying Bachelor-ween content. Oh, The Bachelor. May you never stop with the holiday-themed promos.

On Sept. 7, ABC revealed that Arie would be the face of The Bachelor Season 22, a move that caught a lot of fans off guard. For one thing, there were a number of signs that pointed to more recent alumni like Peter Kraus or Ben Zorn, and most of those signs came from Mike Fleiss' Twitter account.

Also, it's been a minute since Arie was on the show; The Bachelor/ette usually turns to its latest seasons when searching for its next star. But for this upcoming season, the show decided to mix things up. Rather that pluck a contestant from one of the more recent installments of The Bachelorette, ABC opted to take it back several seasons and scoop up someone from Emily Maynard's season.

Yes, a handful of years after he was the first runner-up of Season 8, Arie will attempt to find love on national television once again. It took six long years, but your patience paid off, Arie fans. In 2018, the race car driver's season of The Bachelor will put on a helmet, gloves, and a jumpsuit and do some donuts on your TV sets.

But before Arie's season premieres in January, there will be promos. And if the rest of Arie's Bachelor TV spots are anything like this bonkers Halloween ad, Bachelor Nation sure is in for a treat.