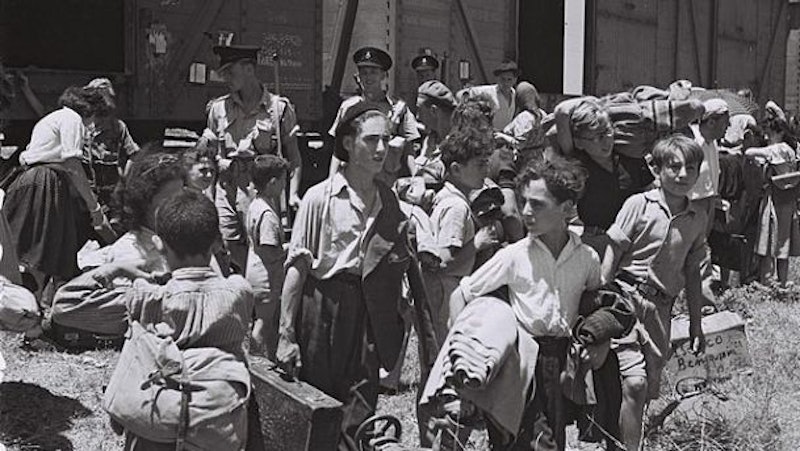 Last Friday, President Trump signed an executive action barring refugees from various Middle Eastern countries, including Syria, from entering America — and he did so on Holocaust Remembrance Day. To many of us, the timing of this feels especially significant. We recognize America turning away refugees in their time of need, because we’ve seen it before. And it lands our country on the wrong side of history.

In the mid 1910s, my great-grandparents left Poland for America. My great-grandfather came first, traveling across the ocean at 13 years old. His parents had died some years earlier, and he was looking for a better life, ideally one free of the persecution he faced as a Jew in Eastern Europe. My great-grandmother — his future wife — came to America a few years later, knowing she would likely never see her home again.

No more of my family members came to North America until the late 1940s. By then, they weren’t just sailing across the ocean for a better life and more opportunity. They were leaving Europe as Holocaust survivors, actively abandoning a home they no longer recognized. My grandfather’s first cousin, who remained in hiding during World War II, moved to Canada with his wife, an Auschwitz survivor he met in a displaced persons camp after the war. She spent her life with a tattoo on her arm inked by the Nazis — a constant reminder of those who believed she was a number to be extinguished, rather than a human life to be protected.

A boat carrying 937 passengers, most of them Jews seeking asylum from the Nazis, approached America. The American government would not allow the boat to dock. Those refugees were sent back to Europe, directly into the hands of Adolf Hitler.

My great-grandparents had two children. Those children each had three children. And those children had a total of 12 children between them. That’s 20 lives that would have ceased to exist had we not been allowed to immigrate — not counting the children that my sisters, my cousins, and I might have one day.

In 1939, a boat carrying 937 passengers, most of them Jews seeking asylum from the Nazis, approached America. The American government would not allow the boat to dock. Those refugees were sent back to Europe, directly into the hands of Adolf Hitler.

Is this the same story my grandchildren will be hearing, only from Syrian friends about their families? Those who made it to America, and those who were left behind to die?

There have been other times throughout history that fear allowed Americans to turn their backs on those who needed help the most. For 22 years, we banned HIV-positive immigrants. Since the beginning of the Syrian conflict in 2011, America has taken in just over 14,000 of the 4.81 million Syrian refugees who have fled their country. Now, with President Trump's executive order, Syrian refugees are banned from entering America indefinitely — even those already cleared for resettlement are being turned back.

We owe it to our ancestors — the vast majority of them immigrants to America themselves — to do better. We should remember the discrimination many of our ancestors faced upon coming to America — whether because they were Irish, or Italian, or Jewish — and we should welcome immigrants and refugees with open arms. It is our responsibility to remind our elected representatives, through phone calls, emails, and protests, that we are a country of immigrants. We need to remind President Trump that anyone immigrating to America already undergoes extensive vetting, and that turning away green card holders and refugees undermines what it means to be American.

Let's use our voices to tell our leaders that we refuse to repeat the mistakes our country has made in the past, that we refuse to disrespect the hard work, perseverance, and courage of our immigrant ancestors by closing the door on those who now stand in their shoes.

More like this
The 5 Best Rugs That Cats Can’t Destroy — & Why Your Cat Scratches, According To A Vet
By Danielle Calma
Reviewers Can't Believe How Comfortable These Cheap Bras & Underwear On Amazon Are
By Andrea Gale Boerem and Alexa Vazquez
Christian Bale Sang With Taylor Swift & His Daughter Can't Believe It
By Radhika Menon
Lashana Lynch’s 'Woman King' Training Was “Traumatizing” For A Relatable Reason
By Radhika Menon
Get Even More From Bustle — Sign Up For The Newsletter