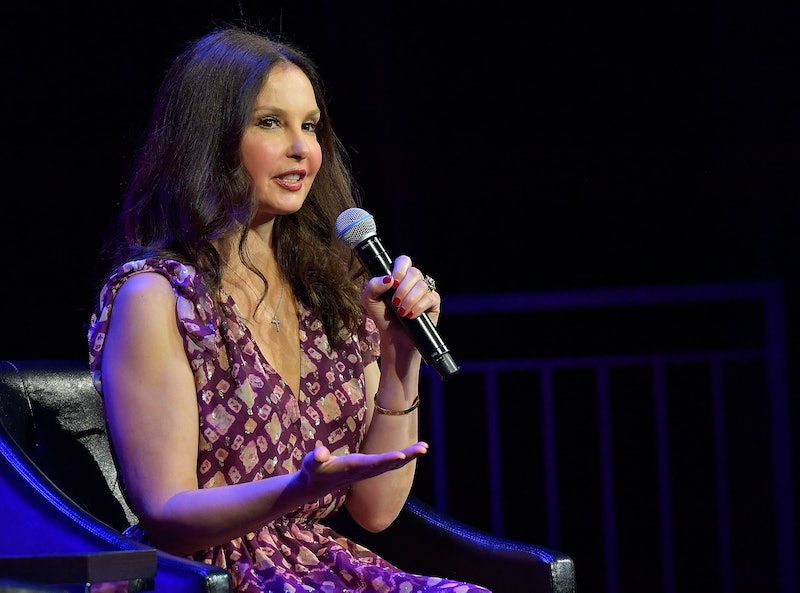 In recent weeks, lawmakers in Ohio and Georgia passed so-called "heartbeat" abortion legislation that would it make it illegal to seek an abortion once a fetal heartbeat is detected. This could be as early as six weeks into a pregnancy, before many people even know they're pregnant. During a panel at the Woman in the World summit on Thursday, actress Ashley Judd condemned "heartbeat" abortion bills, noting that safe and legal abortion access made it possible for her to avoid raising a child with the person who raped her.

“As everyone knows, and I’m very open about it, I’m a three-time rape survivor," Judd told journalist Katie Couric, who was moderating the panel. "And one of the times I was raped, there was conception. And I’m very thankful I was able to access safe and legal abortion. Because the rapist, who is a Kentuckian, as am I, and I reside in Tennessee, has paternity rights in Kentucky and Tennessee. I would’ve had to co-parent with my rapist.”

Last month, Judd signed a letter protested Georgia's six-week abortion ban — titled the Living Infants Fairness and Equality (LIFE) Act — which the state's governor is preparing to sign into law. If he does, the LIFE Act could become one of the most restrictive anti-abortion laws in the country. During Thursday's panel, Judd denounced such legislation, explaining that safe abortion access is important to her because "democracy starts with our skin." She went on to criticize any attempts by lawmakers to "regulate what we choose to do with our insides.”

The decision to implement abortion bans upon the detection of a fetal heartbeat is highly contested by physicians and reproductive rights lawyers, who have pointed out that not all pregnancies are the same. Doctors also don't agree that "heartbeat" is a medically accurate term to use toward the beginning of a pregnancy; indeed, many of them opt for the term "pole cardiac activity," HuffPost reported.

For Judd, being open about her own experiences with abortion and sexual assault has been an important part of her advocacy. She was one of the first people to accuse Harvey Weinstein of sexual harassment, and although a judge dismissed her harassment claim earlier this year, he also said she can make the argument that Weinstein ruined her career once she rejected his advances, per NPR.

“Everybody’s been talking about whether the sexual harassment piece has been dismissed, but it’s actually going to be heard by the ninth circuit court of appeals,” Judd told Couric at Thursday's panel. “And what that language is about is whether or not as a producer it was criminal for him to sexually harass me. It’s not disputed whether or not he did, even he admits to that.”

If Georgia's "heartbeat" bill becomes law despite significant protest, it could become the fourth state to enact a six-week abortion ban just this year. According to The New York Times, the governors of Kentucky, Mississippi, and most recently Ohio have all signed six-week bans into law, and Iowa and North Dakota have passed similar laws in recent years.