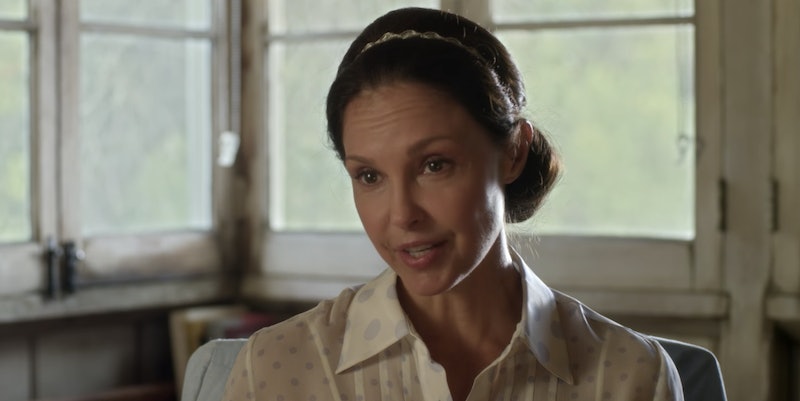 Even though she arrives during a birthday party, Ashley Judd's latest movie character is the bearer of bad news. In an exclusive Trafficked clip provided to Bustle, fans of the actor can watch as she takes on the role of Diane, a social worker, who may drop a bombshell on an 18-year-old's birthday, but it's seemingly with her best interests at heart. As seen in the clip, Diane unfortunately must tell Sara, the birthday girl, that she's aged out of the foster care program. Not only that, but she must leave her sister behind. While Diane appears to be trying to help, this winds up being the catalyst for the movie's jaw-dropping and eye-opening plot, as seen in the full trailer.

Trafficked, which hits theaters in NYC on Oct. 6 and in LA on Oct. 13, is based on the book Sex Trafficking: Inside the Business of Modern Slavery by Harvard Professor, Siddharth Kara. According to a press release, the book and accompanying movie are "inspired by the harrowing stories of real women and girls" involved in human-trafficking. The movie takes follows three young women from a variety of places — the U.S., Nigeria, and India —who are all "exploited as sex slaves yet ultimately reclaim their dignity and freedom." In the movie, these women are taken against their will to a Texas brothel, where they band together to try and find a way to escape.

As explained in a statement by screenwriter Siddharth Kara, the characters are "represent composites of the numerous victims I have spoken with, reflecting the main ways sex trafficking occurs in the world." Kara spent more than 16 years compiling field research for the book and subsequent film, including traveling to more than 60 countries around the world. The statement continues,

"Trafficked is a thrilling, intersecting narrative that spans the globe, touching on organ trafficking and labor trafficking along the way. While there are painful encounters, it is ultimately the story about the strength of the human spirit to fight back against all odds, and the will to be free."

The movie plot is further elaborated on in the full trailer, below. Though, just a warning, parts of it are a little difficult to watch.

Based on the scenes in the trailer, along with the exclusive clip, it's unclear how big of a role Judd's character has in Sara's abduction. At the very end of the trailer, she's seen on the phone, saying she thinks Sara is doing fine; meanwhile, the teen is captured and taken to a brothel. Is Diane actually helping, or does she have an ulterior motives? It's intriguing, yet frightening all at the same time.

Though the clip with birthday balloons and cake may seem lighthearted, this movie tackles a very serious subject — and for good reason. The film is intended to shed light on the issue of human-trafficking that the press release refers to as a "complex global crisis," which doesn't only happen overseas, but also right here in the U.S.

The focus of the movie appears to be a cause close to Judd's heart, as she was appointed an ambassador for the Polaris Project back in May 2016. The organization describes itself as "a leader in the global fight to eradicate modern slavery and restore freedom to survivors," and reports that Judd has advocated on behalf of victims of sex-trafficking for years. In a statement about being a Polaris ambassador, she said,

"My travels to 15 countries has seared into me that, in the slums of Mumbai, on the streets of Nashville, amongst Syrian refugees, human trafficking is literally everywhere. Vulnerable people, and even educated and well-resourced people, are tricked, coerced, recruited, and enslaved. Traffickers, some formal and organized, other informal and transactional, earn stunning profits by using, over and over, the bodies and labor of their fellow human beings."

Judd also wrote an op-ed for Mic in February 2017 on the subject. "Let’s continue to listen to survivors and use our power and our voices to end sexual exploitation and abuse. Listening is sacred activism," she concluded.

Regardless of what role her character plays in the movie Trafficked, the film clearly spotlights a cause close to Judd's heart and one worth fighting.

More like this
Lin-Manuel Miranda & Tituss Burgess React To 'Little Mermaid' Casting Backlash
By Radhika Menon
An Extremely Messy Ranking Of What Actually Happens In 'Don't Worry Darling'
By Chloe Foussianes
14 Women To Watch This Oscar Season
By Marina Watts
Paul Mescal, Man Of Mystery
By Samantha Leach and Heather Hazzan
Get Even More From Bustle — Sign Up For The Newsletter