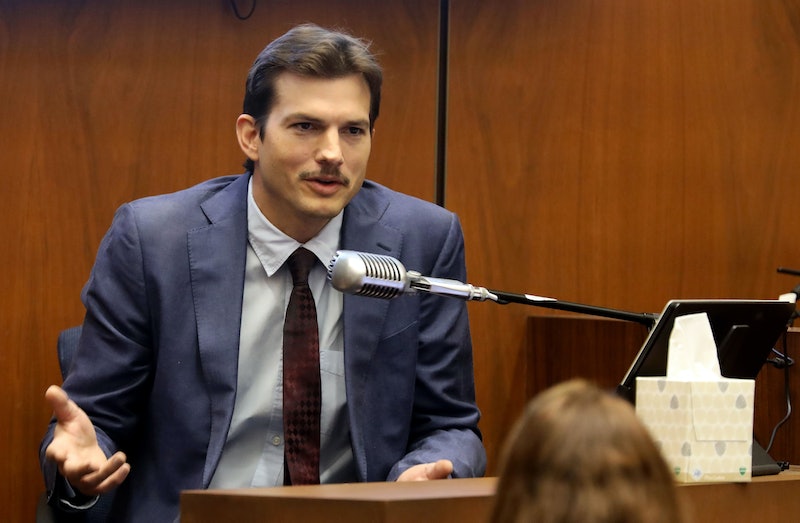 On Wednesday, May 29, E! News reported Ashton Kutcher testified in a murder trial against an alleged serial killer named Michael Gargiulo, who is also known as the "Hollywood Ripper." Gargiulo has been accused of not only murdering 22-year-old Ashley Ellerin in 2001 in her Hollywood Hills home, but also two other women. Ellerin was a casual acquaintance of Kutcher's at the time of her death. In 2011, Gargiulo told CBS' 48 Hours, "I'm 100 percent innocent." E! News also reported that his attorney, Daniel Nardoni, previously informed the Los Angeles jury that Gargiulo claimed he didn't kill the three women.

During his testimony, Kutcher said that he and Ellerin were supposed to hang out on the night of her death in 2001. He learned the next day that she had been killed. According to E! News, Kutcher and Ellerin met around two months prior, and he also went to her housewarming party two weeks before her murder. According to the Associated Press, Ellerin and Kutcher planned to attend a post-Grammy Awards party together.

However, when the day of their date arrived, things didn't go as planned, because he was running late. The Chicago Sun Times reported Kutcher called Ellerin from the That '70s Show set where he was rehearsing. According to E! News, he called her multiple times and left a voicemail telling Ellerin he was still going to be late. Kutcher said Ellerin called him back from a friend's phone. As reported by Us Weekly, Kutcher said on the witness stand,

"I called [Ashley] around 7:30 p.m. because I was running late. At 8:24, she said she got out of shower and she said she was calling from her friend Jen’s phone. I was like, 'I will see you later.' That was about it."

Later on, Kutcher said he phoned Ellerin again to let her know he was finally on his way, but she never answered. Before going to her house, Kutcher said he went home and took out his dogs. He called her again, but she didn't answer. Per Us Weekly, Kutcher testified about trying to call her multiple times, "I was trying to take her on a date and I didn’t want to sound overeager, so I just left her a message."

Eventually, Kutcher said he went over to Ellerin's and the lights were on, but she didn't answer the door. He said he looked through a window to find a messy inside and what he thought might be red wine stains on a carpeted stairway. He left right after. According to Kutcher, he assumed her house was messy from the housewarming party and because she had only just moved in. "I figured I screwed up by showing up too late and she [had already] left," Kutcher said on the stand.

Ellerin's body was found by her roommate the next morning. According to The Los Angeles Times, "Prosecutors allege [Gargiulo] entered Ellerin’s Hollywood home one night in February 2001 and stabbed her 47 times, slashing her throat so severely that he almost decapitated her."

The Times reported that Kutcher was worried about his fingerprints being on Ellerin's door following her murder. "I was freaking out," he said during cross-examination. Nardoni told him, "Don't worry, you're not a suspect." Kutcher responded, "Thank you."

Prosecutors allege that Gargiulo stalked young women for 15 years and used his job as an air-conditioning repairman in order to get access inside their homes. According to the Associated Press, prosecutor Daniel Akemon said during the trial, "What you will hear is that Michael Gargiulo for almost 15 years was watching, always watching. And his hobby was plotting the perfect opportunity to attack women with a knife in and around their homes."

The AP reported Gargiulo pled not guilty "to two counts of murder and an attempted-murder charge stemming from attacks in the Los Angeles area between 2001 and 2008." In 2008, Gargiulo was arrested after DNA evidence linked him to one of the murders and another non-fatal attack. As reported by the AP, Gargiulo was then separately charged for killing an 18-year-old woman in Glenview, Illinois. Prosecutors are seeking the death penalty against Gargiulo.

More like this
Where Is Armie Hammer’s Ex-Wife Elizabeth Chambers Now After 'House Of Hammer'?
By Grace Wehniainen and Radhika Menon
Twitter Is Freaking Out Over Rihanna’s 2023 Super Bowl Halftime Show Announcement
By Stephanie Topacio Long
Alec & Hilaria Baldwin Gave Their 7th Child Another Version Of The Name Hillary
By Stephanie Topacio Long
Devi Is Going To Meet A “Smoldering Bad Boy” In ‘Never Have I Ever’ Season 4
By Jack Irvin and Gabrielle Bondi
Get Even More From Bustle — Sign Up For The Newsletter