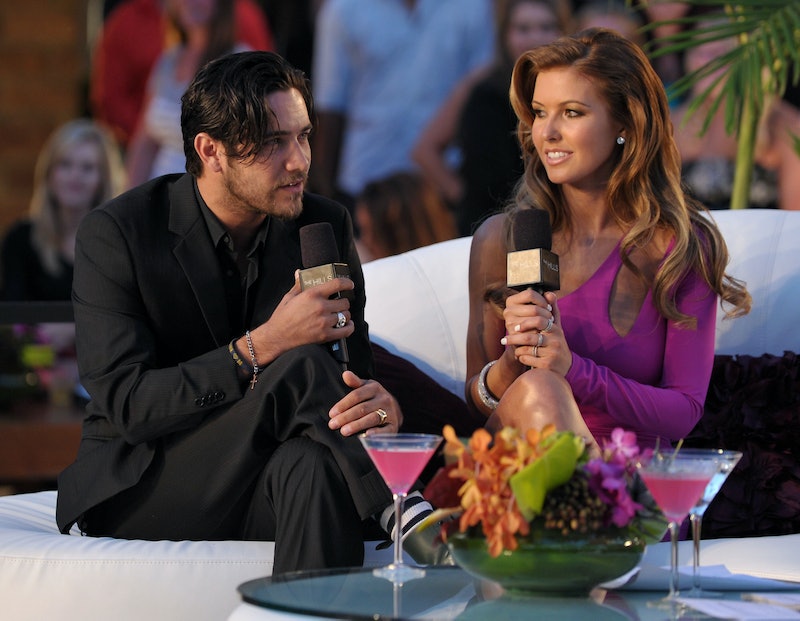 All quintessential reality couples have ups and downs. But Audrina Patridge and Justin Bobby Brescia's relationship timeline might prove them the most tumultuous couple of all time — onscreen or off. Now that they're vaguely rekindling things on The Hills: New Beginnings, it's clearer than ever how engrained that on-off dynamic is for these two — and how hard it will be for them to ever break it.

When they met, Justin Bobby was an emotionally unavailable haircutter and aspiring musician, and Audrina an aspiring actor who hoped she could change him. For years, Audrina rekindled their romance over and over, and got crushed every time. In this week's episode of New Beginnings — nearly a decade after we watched them last part ways — Audrina muses to a producer: "Justin has the sweetest heart. It's so confusing and it's so hard to put together all these mixed signals."

At this point, MTV may as well be airing re-runs of their time together. Let's take a look through their relationship timeline — and see just how far we haven't come.

Justin Bobby and Audrina actually met a few years prior, when he and Audrina were working at Quixote Studios. Audrina asked him to cut her hair, the Hills producers asked him to come on the show, and the rest was history. We first meet Justin and his infamous beanie at a dinner date, and it's immediately clear that Justin is equal parts good looking and bad news.

LC and Lo agree: Audrina introduces Justin (as her ex-boyfriend) to Lauren and Lo, and they immediately clash. To be fair, Audrina's friends were pretty predisposed to dislike him from what they'd heard; but Justin Bobby is also immediately abrasive. It's a bad time.

The Hills Season 3, Winter 2007: Audrina & Justin Give Their Friends Whiplash

Over the course of The Hills Season 3's 29 episodes, Audrina and Justin have at least two major breakups, and spend most of the time in between having long, nonsensical conversations about their level of commitment to one another. The second breakup is especially catastrophic. Audrina sees Justin making out with another girl in front of her, and leaves absolutely devastated — until they reunite a few months later.

Yes, some of these storylines are fabricated, and yes, editing can make anything look possible! But clearly, Audrina and Justin had a tough time settling on a relationship dynamic that worked for them both, and it led to a lot of heartbreak.

In Season 4 of The Hills, Audrina and Justin fight about similar things to Season 3: she wants him to work on their relationship and he won't, he has tension with Audrina's friends, and she's on and off with Corey Bohan (who later becomes her husband). Like clockwork, Justin starts paying attention to her the second anyone else is interested. And like clockwork, Audrina leaves the other guy 5-7 business days after Justin starts showing interest again.

In Season 5 of The Hills, Kristin Cavallari spices it up by dating Justin for a few episodes. But even then, the tension between him and Audrina lives on, with him telling her (while still with Kristin) that he'll always have feelings for her. The season ends with him and Kristin still together, and Justin gaslighting Audrina into oblivion by telling her they were never really a couple.

In Season 6, Audrina starts dating Ryan Cabrera — so naturally, Justin starts sniffing around again. By the series finale, however, Audrina has finally decided she's better off without him (yay!), and the two share a peaceful moment of closure. If only the timeline could end here...

The Hills: New Beginnings, Summer 2019: Audrina & Justin Pick Up Where They Left Off

In the series premiere of New Beginnings, recently divorced Audrina reveals that Justin was the first person to reach out to her after her divorce. The two go to dinner later that week, where Justin says vague, irritating things like "it's just getting started" and "he wasn't the love of your life." Audrina giggles and calls him a bad boy. It's bleak.

In Episode 2 of the new series, Audrina's voiceover is already starting to sound suspiciously like 2007. "It’s always fun rekindling that old flame," she says of her time with Justin. "There’s always going to be that flirtiness and attractiveness. I don’t know that that will ever change." If Audrina Season 6 finale could hear her now, she'd be so disappointed.

While Justin does appear interested in Audrina at this point in the show, it's important to remember that this is a part of the same cycle we've seen play out a hundred times. He vascillates wildly between ignoring her completely and smothering her in attention, because he doesn't really want to date her but he can't live with ever losing her.

"Justin has definitely let me down but I’m giving him the benefit of the doubt," Audrina says as she heads out to another date with him. After 10+ years watching their relationship dynamic, it really doesn't seem like that's a good idea.

More like this
RHOP’s Robyn Dixon Explained Why Juan Paid For Another Woman's Hotel Room
By Brad Witter
Gemma Atkinson & Gorka Márquez Are Strictly The Sweetest Couple
By El Hunt
Barney Walsh Has Been Linked With This Famous Miss World Winner
By Sophie McEvoy
'Love Island' Has Added Yet Another Bombshell To The Villa
By Bustle UK
Get Even More From Bustle — Sign Up For The Newsletter
From hair trends to relationship advice, our daily newsletter has everything you need to sound like a person who’s on TikTok, even if you aren’t.