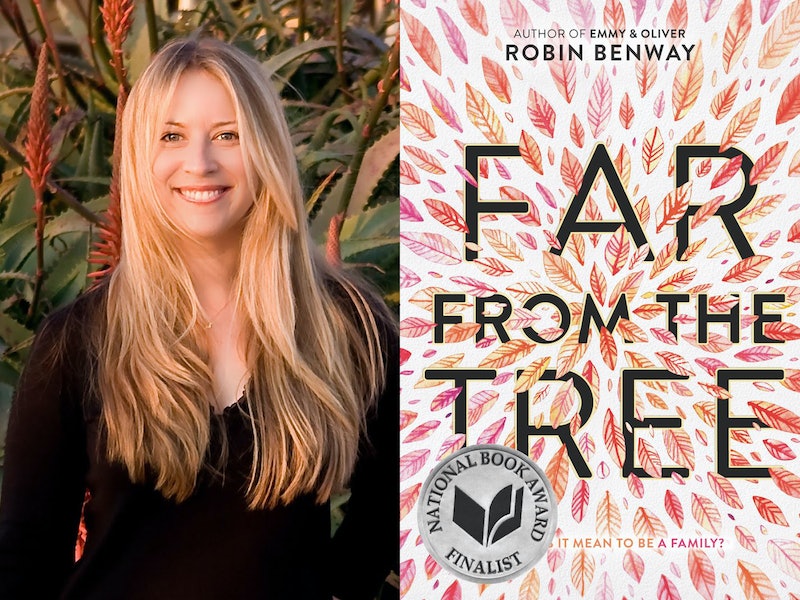 Robin Benway was rejected from every Master of Fine Arts writing program she applied to. The month she would have graduated, her first novel, Audrey, Wait!, was published. Nearly 10 years later, her sixth book, Far From the Tree, was named a finalist for one of the most prestigious awards in literature: the National Book Award for Young People's Literature.

Benway was helping her mother move when the list of finalists was announced, and she checked to see if she knew anyone. She did — first on the alphabetical list was her friend Elana Arnold, author of What Girls are Made Of. Benway was thrilled for Arnold... and shocked to see her own name next on the list.

"I said ‘I think I’m nominated for the National Book Award.’" Benway tells Bustle. "My mom was like, ‘No, I’m pretty sure you’re nominated.’” Benway admits that she wasn’t very much help with the move after that.

Far From the Tree follows three siblings who reconnect 15 years after being separated by adoption. When 16-year-old Grace gives up her own baby for adoption, she feels a void that drives her to meet her biological family. Maya, she finds, is a 15-year-old firecracker whose adoptive family is unraveling. Together they meet Joaquin, 17, who has spent his life in the foster care system and thinks he might be better off without a family at all. It’s a beautifully written story about the families we’re born with and the families we choose, as well as the power — and potential pain — of that choice. “Sometimes, family hurts each other,” Maya says. “But after that’s done you bandage each other up, and you move on. Together.”

"As a writer I’ve always been interested in found family," Benway says. “When you think about your family members, of course they’re the ones you grow up with, the people you’re biologically related to, but what exactly makes your family?”

Far From The Tree by Robin Benway

There are few similarities between Benway’s family and the ones she created in the book, though she drew on her relationship with her brother, to whom the book is dedicated, for the loving-teasing sibling banter. She also spent about eight months researching adoption, foster care, and the realities for children in these situations, especially those who are LGBT or people of color (Maya is gay and Joaquin is Mexican-American).

"When you think about your family members, of course they’re the ones you grow up with, the people you’re biologically related to, but what exactly makes your family?"

“I tried to talk to as many people involved in as many facets of foster care and adoption as I could,” she says. “These characters bring to the table so many experiences that I haven’t had, so I really wanted to make sure I took that seriously.”

Despite the differences in their lives, Benway found a connection to Grace, Maya, and Joaquin as a writer.

“At the end of the day, it’s empathy,” she says. “It’s true for these characters, so I put myself in their shoes and imagine what they’re feeling.”

That empathy is an essential part of telling stories, Benway says. She always wanted to be a writer, but growing up she didn’t know anyone who did it professionally. “It was such a foreign concept,” she says. “I loved Beverly Cleary and Ann M. Martin and to me they lived in a house on a hill somewhere. I couldn’t tweet Judy Blume like I could now if I wanted to.”

"It’s true for these characters, so I put myself in their shoes and imagine what they’re feeling."

Instead, she started her career on the other side of publishing, working as a book publicist and sales rep, and coordinating events at Book Soup in Los Angeles. Eventually, spending time with authors made her realize being a writer was a viable endeavor.

“Finally I decided, I’m going to take a year and I’m going to see if I can do it,” Benway says. “I didn’t even know what ‘it’ was. Was it get an agent, was it sell a freelance article? I didn’t know anything.”

She quit her job and applied to graduate writing programs, with the intent of writing serious fiction for adults. When she wasn’t accepted, she took a writing class at UCLA Extension taught by YA writer Rachel Cohn, author of the Beta series, where she wrote the first chapter of what would become her debut YA novel, Audrey, Wait!.

“I was like oh ok, I really want to do this kind of work,” she says. “Before, I had been writing a bunch of different things in adult fiction, and it was bad because it wasn’t really what I should have been writing.”

In fact, there was a time that she didn’t think she could write this book, or any book again. At first, Far From the Tree was written from Grace’s perspective, but Benway struggled with how to tell such a complex story with only one voice. The manuscript was running late, and she began to doubt her identity as a writer.

“I went through such a dark period,” she says. “I called [my mom] at five in the morning and was like, 'Just so you know, my career is over.' I was convinced that I absolutely did not know what I was doing.”

Meanwhile, she was bombarded by the achievements of other prolific authors. “There’s this feeling like everyone is racing ahead of you. I felt like I was spinning my wheels and losing my window of opportunity to write a book that people would care about,” she says.

Benway’s solution was to go back to the beginning. She restarted her research and had the "wonderful and terrible" realization that she had to rewrite the entire book in alternating perspectives between each sibling. It came out in October, about a year after it was first slated. Now that she's regained her confidence as a writer, the National Book Award nomination is just a nice bonus.

"I felt like I was spinning my wheels and losing my window of opportunity to write a book that people would care about."

"It’s a good reminder to me to have faith in my ability to tell the story, no matter how long it takes. And to not be afraid to take a step back and try to get it as right as possible, and to take your time and to make sure that you’re proud of the work that you’re doing,” she says. “[The nomination] is wonderful and I’m very happy about the trajectory of my life over the past year and a half, but it’s just been a good reminder of how much of writing is really internal and how much of it is trusting your instincts. I had sort of forgotten that."

Benway’s mother will be her date to the awards ceremony on November 15.