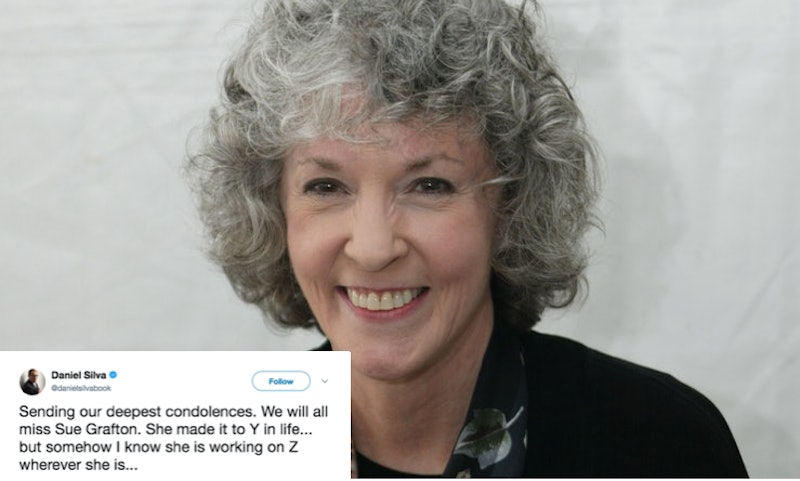 Bestselling mystery writer Sue Grafton has died at age 77, her daughter Jamie Clark announced on the author's website and Facebook page. According to the post, Grafton had been battling cancer for two years. Her husband, Steven Humphrey, and her family were by her side when she died in Santa Barbara Thursday.

Grafton, who had published over 25 books and short story collections at the time of her death, was best know for her "alphabet series" about Detective Kinsey Millhone. She began the series in 1982 with A is for Alibi, and the most recent installment, Y is for Yesterday, was published in August. Grafton died before writing any of the final "Z" book in her series, and according to her husband, was struggling to come up with an idea for it while dealing with her cancer treatments and their side effects.

Grafton's daughter said in the announcement about her mother's death that the author was “adamant that her books would never be turned into movies or TV shows, and in that same vein, she would never allow a ghost writer to write in her name. Because of all of those things," she further explained," and out of the deep abiding love and respect for our dear sweet Sue, as far as we in the family are concerned, the alphabet now ends at Y.”

Grafton's death is a devastating loss for not only the author's family and loved ones, but the legions of fans she had around the globe. Many have already taken to Twitter to express their bereavement, including the Mayor of Louisville, fellow authors, and readers around the world:

Sue Grafton was a pioneering detective novelist who has defined the genre for decades. She will be missed, and for fans of Kinsey Millhone, the alphabet will never be the same again.