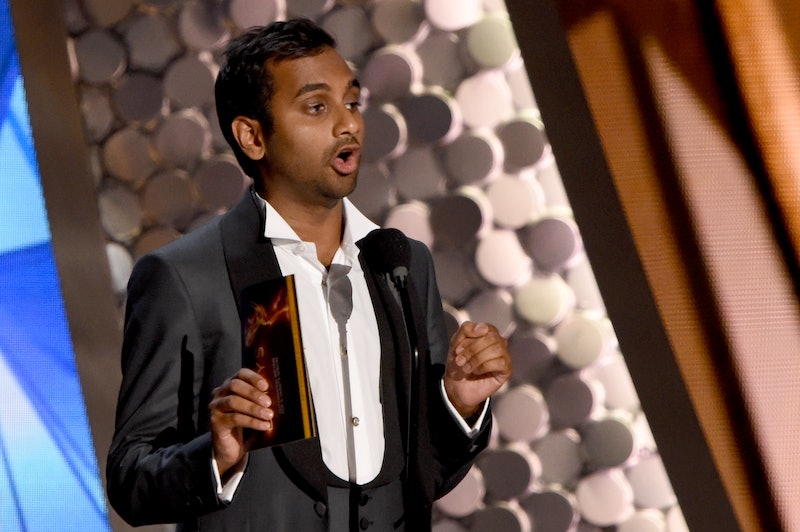 Saturday Night Live broadcasted its first episode after President Donald Trump's inauguration and broke through some racial barriers at the same time. The show's first-ever host of South Asian descent, comedian and actor Aziz Ansari, made his SNL debut, taking down racism with his hilarious yet hard-hitting monologue.

It's probably no mistake that SNL chose a Muslim person of color who is the child of Indian immigrants to host the show right after Trump's swearing-in as president, given Trump's past negative comments about Muslims and immigrants. Ansari himself has publicly criticized Trump in the past, including in an op-ed in the New York Times entitled "Why Trump Makes Me Scared for My Family."

But during his SNL monologue, Ansari at first seemed to be warning against "demonizing" people who voted for Trump. "Don't judge them for their worst," he said. "Some people have different political priorities. Some people voted for him with reservations. I'm sure a lot of people voted for Trump the same way a lot of people listen to Chris Brown, where it’s like, hey, man, I'm just here for the tunes, I don't know about that other stuff." Ouch. Ansari was, of course, referencing Brown's past assault of his then-girlfriend Rihanna, which didn't stop Brown from continuing his successful music career. Similarly, neither the discriminatory things Trump has said, nor the offensive comments he's made toward women (including on the infamous Access Hollywood tape) have stopped Trump from becoming America's president.

After throwing shade at Trump, Ansari went on to fire back at racists, including a new class of "casual" white supremacists he named "the lowercase kkk." Ansari referenced the "tiny slice of people that've gotten way too fired up about this Trump thing for the wrong reasons. I’m talking about these people who, as soon as Trump won, were like ‘we don’t have to pretend we’re not racist anymore! We can be racist again!’” Ansari has a point; after Trump was elected president last November, many news outlets reported on a surge in hate crimes against traditionally marginalized groups.

Trump told people committing these crimes to "Stop it," during an appearance on CBS' 60 Minutes. But Ansari wants him to commit to disavowing racists more strongly. "Don't tweet about me being lame or the show," he said during his monologue, addressing Trump, who actually has tweeted negatively about SNL. "Write a real speech, because these people are out there and it’s pissing people off."

But despite taking on Trump through comedy, Ansari turned briefly serious towards the end of his monologue, reassuring anyone scared or worried about having Trump as a president that they will be fine regardless of who the president is. "Because if you look at our history, change doesn't come from presidents," Ansari said. "Change comes from large groups of angry people. And if day one is any indication, you are part of the largest group of angry people I have ever seen."