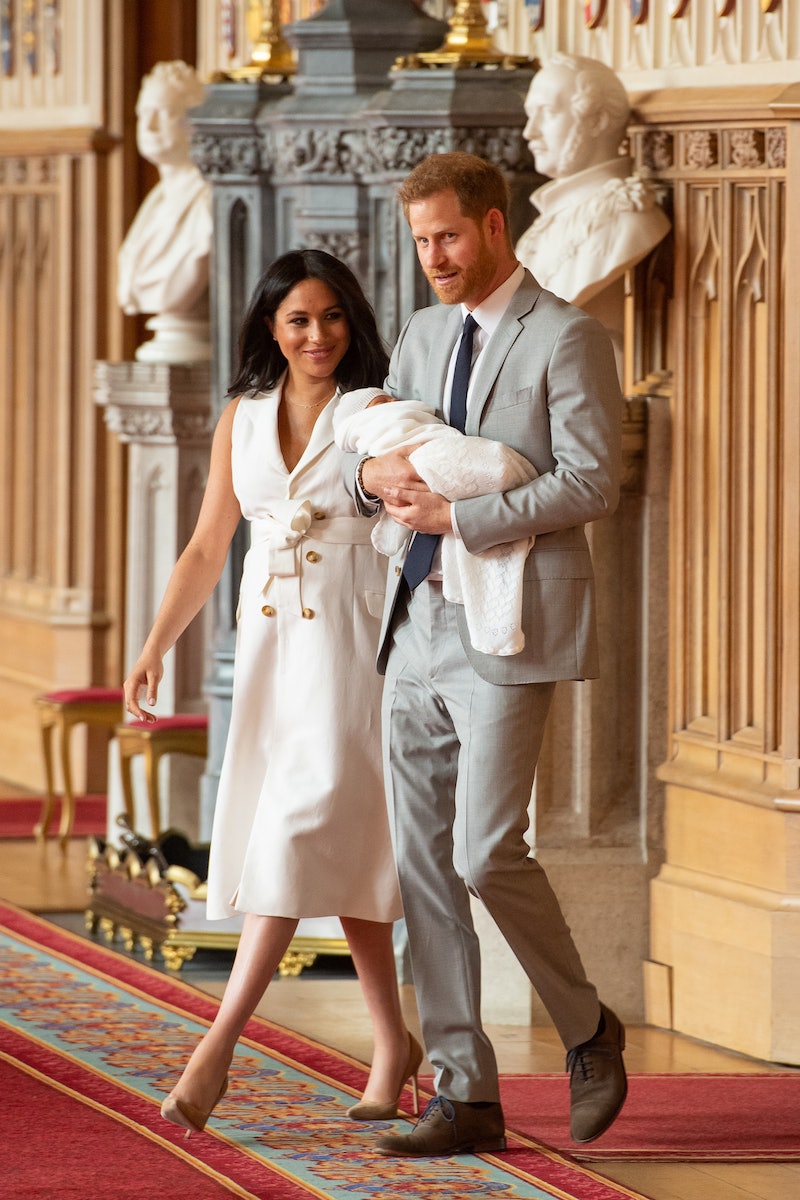 Now that Meghan Markle and Prince Harry's son, Archie Harrison Mountbatten-Windsor, is stealing everyone's hearts, it's time to dissect his name. For example, baby Archie's middle name Harrison has many people speculating exactly why the royal couple chose this particular name. There's a chance that Harrison has a pretty straightforward meaning. Are you ready for this? Believe it or not, but there are reports that the Duke and Duchess of Sussex chose Harrison because it literally mean's "Harry's son" or "son of Harry."

As you can see below, CNN tweeted on Wednesday that "a royal source" informed the news outlet that Markle and Harry "just liked the name Archie" and they went with Harrison as a middle name to mean "son of Harry." BBC News investigated the royal baby's moniker and noted that not only does Harrison mean "son of Harry," but it was "a name which was originally used as a surname."

"It may well be it's a name that Meghan is familiar with and again that's why they are using it. Archie has a British feel to it, whereas Harrison is more of an American name. The first Harrison that springs to mind is Harrison Ford. They have wanted to do something a little bit different, and they have done."

According to People, their son's middle name has history. "Harrison, originated in the Middle Ages as a patronymic meaning 'son of Henry' or 'son of Harry,'" per the publication. For those unaware, Harry's real name is Henry Charles Albert David, so "son of Henry" also applies.

Neither Markle or Harry have explained why they selected Archie Harrison, but the possibility of them choosing the middle name in honor of Harry has Twitter reacting in all kinds of ways. Here are just a few of the many responses:

So Much Love For Harrison

It may be literal, but it's a touching tribute to Harry, who has always wanted to be a dad.

Some Fans Totally Get It

Who else is going to read "Harrison" as "Harry's son" from here on out?

They Get A "Gold Star"

The Tears Are Forming

The Name Is Blowing Some Minds

An appropriate reaction. Once you figure it out, it's definitely mind-blowing.

At this time, it remains unclear why Markle and Harry picked Harrison, but all that matters is that they are already completely head over heels in love with Archie. Parenthood seems to come naturally to the couple. Like Markle said when showing her son to the world for the first time, "It's pretty amazing, I have the two best guys in the world so I'm really happy." She also called the experience of becoming a mother "magic."

There's no denying that baby Archie's full name is a memorable one that no one expected and one nobody will ever forget.