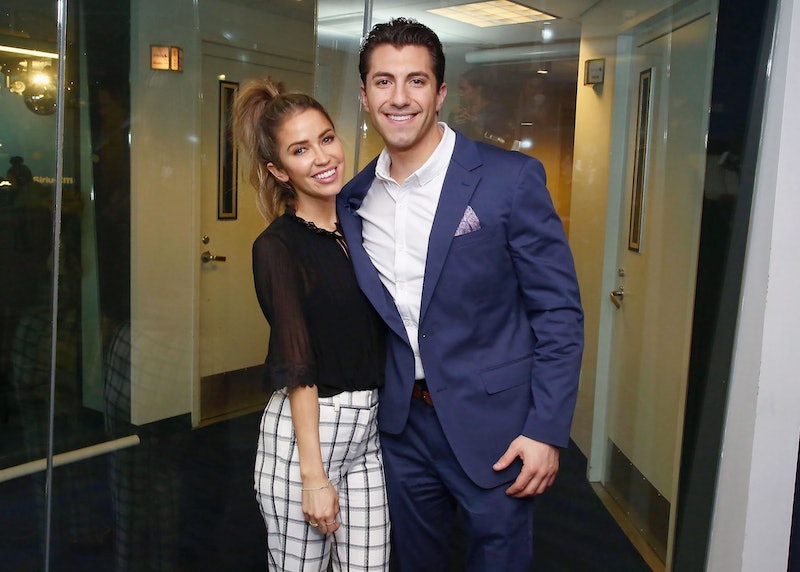 Looks like someone is ditching his bachelor pad. Seattle-based corporate banker Jason Tartick is moving in with Kaitlyn Bristowe, the Bachelor Nation couple excitedly announced on the May 24 episode of the Off the Vine with Kaitlyn Bristowe podcast. "Guess what everybody," squealed the former Bachelorette, who also gushed she couldn't "hold it in anymore," during the broadcast. "Two very big things in the news today, in my world anyways … Jason is moving to Nashville!"

"Kaitlyn and I got to a point where being across the entire country didn't make sense. I think that for the short term and the long term, Nashville was the best place for us to be. It puts us back on the east coast. I'll be a few hour-drive from my parents, quick drive from my brother, and, it puts us in a better position for short and long-term ... We're at the next step in our relationship, where we want to grow even more and we can't do that in long distance."

Dubbing May 24 "National Jaitlyn Day," Kaitlyn also shared the second pawsitively exciting relationship update: She and Jason adopted a rescue dog, which they named Ramen Noodle Vino. Noting in an Instagram post that the pair calls the pooch "Noods," Kaitlyn shared a bit of the one-ish-year-old pup's sad history. Writing from Ramen Noodle's perspective, she posted, "I was saved by Amanda at @bunnysbuddies after living on the streets in Korea with broken bones. I’ve been hurt by humans, but I’m going home to Nashville now, where I will live the best life full of love, travel, and belly rubs."

In his own post, Jason further explained that their new furry friend "was abandoned and found roaming the streets of South Korea with a broken pelvis from being kicked." He added that he and Kaitlyn "are so excited to give Ramen the life and love he deserves...all under the same roof!"

In addition to making Ramen Noodle his own Instagram account, the couple also celebrated the adoption by partaking in a champagne toast, which they documented on social media — using the Snapchat dog filter, of course.

"We got Ramen Noodle!" Kaitlyn exclaimed in an Instagram Story video posted to both the dog's and her official IG page. "He comes to join the Bristicks? The Tartowes?..." After Kaitlyn settled on "Tartowes," Jason chimed in, joking that Ramen Noodle "is officially the coolest member of this family."

And guess who has the honor of being named Ramen Noodle's dogfather, er, godfather. It's none other than Season 23 Bachelor Colton Underwood. "I'm a proud god father [sic] to this little noodle," Colton posted in an Instagram Story, also welcoming the pup to IG.

When confirming their relationship during a joint January appearance on the Today show, Kaitlyn said they'd been together for "a month or so." Explained Jason, “We were friends. A little banter here and there and friendship turned into a relationship.”

And with a new home and dog joining their family too, Kaitlyn and Jason really seem to be committed to going the distance with their relationship.

More like this
Everything To Remember About Lace Morris Before 'Bachelor In Paradise' Season 8
By Grace Wehniainen
Here's Exactly When Rachel & Tino's Fight Happened After 'The Bachelorette'
By Grace Wehniainen
Where Is Former Bachelor Host Chris Harrison Now & What Is His Net Worth?
By Hugh McIntyre
'The Bachelor's Peter Weber & Kelley Flanagan Are Reportedly Back Together
By Grace Wehniainen
Get Even More From Bustle — Sign Up For The Newsletter