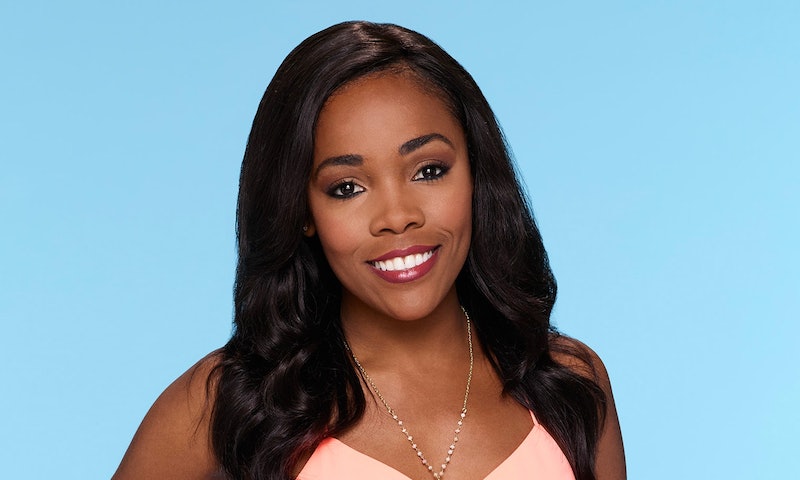 The stories and claims related to the Bachelor in Paradise shutdown keep coming. Warner Bros. shut down production of BiP Season 4 citing "allegations of misconduct." Reports soon came out claiming that two cast members, DeMario Jackson and Corinne Olympios, were allegedly involved in what may have been a non-consensual sexual encounter. Now, contestant Jasmine Goode has claimed that Olympios "forced herself" on three contestants in her own statement to E! News. Bustle has reached out to Olympios' rep and lawyer for comment and to ABC. Warner Bros. has no further comment beyond its original statement (below).

Update: On June 20, an ABC spokesperson provided the following statement to Bustle:

"As we previously stated, we recently became aware of allegations regarding an incident on the set of Bachelor in Paradise in Mexico. We take all such allegations seriously. The safety, security and well-being of the cast and crew is our number one concern, and we suspended filming so that the allegations could be investigated immediately and thoroughly. Our internal investigation, conducted with the assistance of an outside law firm, has now been completed. Out of respect for the privacy interests of those involved, we do not intend to release the videotape of the incident. We can say, however, that the tape does not support any charge of misconduct by a cast member. Nor does the tape show, contrary to many press reports, that the safety of any cast member was ever in jeopardy. Production on this season of Bachelor in Paradise will be resuming, and we plan to implement certain changes to the show’s policies and procedures to enhance and further ensure the safety and security of all participants.”

“It needs to be made crystal clear that production of 'Bachelor in Paradise' was shut down because of multiple complaints received from 'BIP' producers and crew members on the set. It was not shut down due to any complaint filed by Corinne against anyone. It comes as no surprise that Warner Bros., as a result of its own internal Investigation, would state that no wrong doing had occurred. Our own investigation will continue based on multiple new witnesses coming forward revealing what they saw and heard.”

Earlier: On Wednesday, Olympios released a statement to Bustle regarding the allegations, which reads,

I am a victim and have spent the last week trying to make sense of what happened on June 4. Although I have little memory of that night, something bad obviously took place, which I understand is why production on the show has now been suspended and a producer on the show has filed a complaint against the production. As a woman, this is my worst nightmare and it has now become my reality. As I pursue the details and facts surrounding that night and the immediate days after, I have retained a group of professionals to ensure that what happened on June 4 comes to light and I can continue my life, including hiring an attorney to obtain justice and seeking therapy to begin dealing with the physical and emotional trauma stemming from that evening.

In response to the allegations, Jackson released a statement to E! News, also on Wednesday:

It's unfortunate that my character and family name has been assassinated this past week with false claims and malicious allegations. I will be taking swift and appropriate legal action until my name is cleared and, per the advice of legal counsel, will be seeking all available remedies entitled to me under the laws.

As for Goode, she claimed in her statement to E!:

The day of the incident under investigation, Corinne did not display any change in behavior from what was observed by the cast on her season of The Bachelor. Corinne forced herself on three male cast members, when they were unable to consent, in addition to engaging with DeMario. After the incident everything seemed fine. There was no mention about being hurt. However, when producers tried to cut her off from drinking, she got upset and said, "Watch, watch what I'm gonna do."

The cast is not encouraged or forced to engage in any behaviors or to drink alcohol. Producers check in to make sure the cast is comfortable and accommodate to the needs requested.

Goode also shared a statement with the Daily Mail. She claimed,

I was taken back with Corinne's statement that she's the victim. That may be the role she plays on the show, but it's a role. I don't believe she was a victim or traumatized. The statement she released doesn't even sound like her. It sounds like someone wrote it for her. Not once did she complain or say she was upset with what happened in the pool with DeMario. She was laughing, having a good time. Even the day after, she was hanging out with DeMario and some other people in the hot tub. I honestly thought they were going to become a couple. She never, ever said one thing negative about DeMario. And she was never in danger, at least I never witnessed anything bad happening to her ... As a woman, I would have been the first person to step in if I thought she was being taken advantage of in the pool with DeMario. She even said hi to me when I walked by them. I feel bad for DeMario. He's a good guy. He's sweet and not aggressive one bit. I am sad and disappointed this has happened. We are all shocked.

When filming for Season 4 was halted, Warner Bros. released the statement below:

We have become aware of allegations of misconduct on the set of Bachelor in Paradise in Mexico. We have suspended production and we are conducting a thorough investigation of these allegations. Once the investigation is complete, we will take appropriate responsive action.

More like this
Tahzjuan Took A Cruise With These Bachelor Nation Alums After Visiting Zach's Season
By Kayla Blanton and Grace Wehniainen
This 'Bachelor' Contestant Already Has A Lot In Common With Zach
By Grace Wehniainen
All The Clues Zach & Christina Are Together After 'The Bachelor'
By Grace Wehniainen
Zach Addressed His "Boring Bachelor Energy" After His Group Date With Latto
By Grace Wehniainen
Get Even More From Bustle — Sign Up For The Newsletter
From hair trends to relationship advice, our daily newsletter has everything you need to sound like a person who’s on TikTok, even if you aren’t.