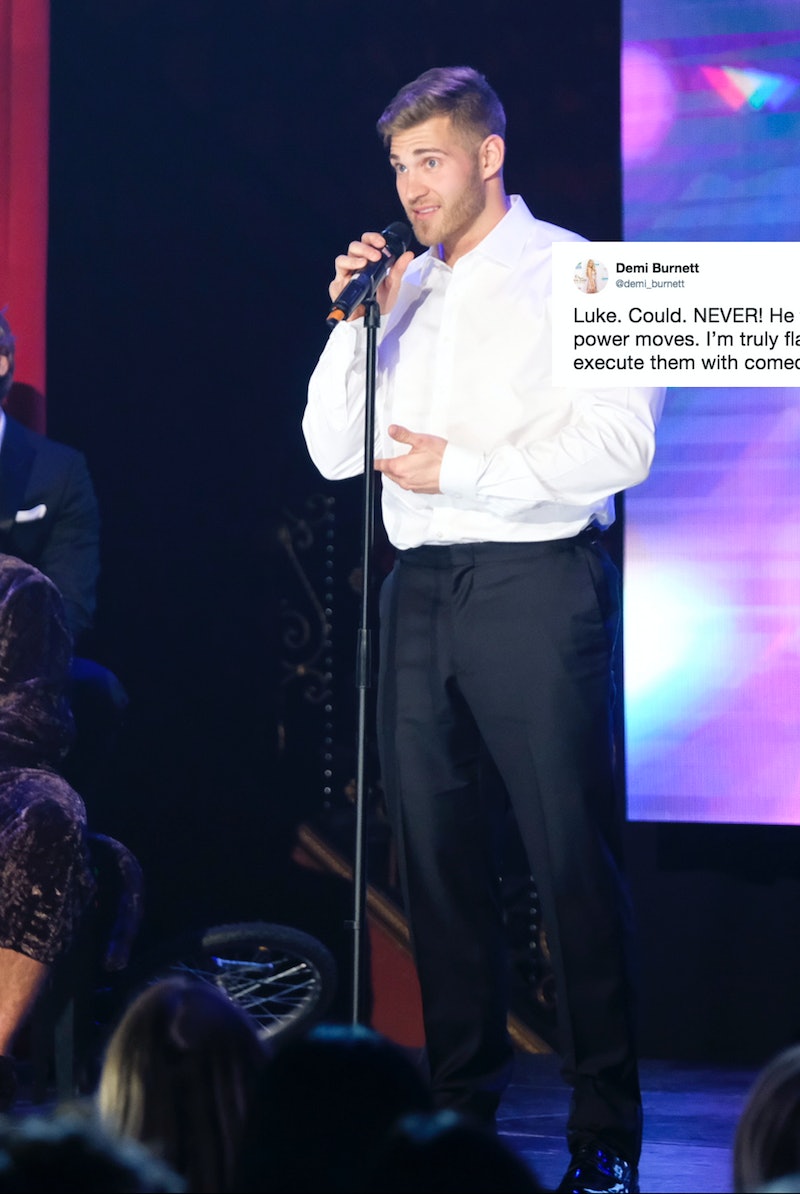 It's still early on in Hannah Brown's Bachelorette season, but there's already one standout suitor... but not in a good way. Ever since Luke P. talked about God meeting him in the shower during his intro package, he's been a polarizing person on the show. If Twitter is any indication, Luke is the one Bachelorette contestant that franchise alums think Hannah should send home. Everyone from Nick Viall to Ashley Iaconetti has weighed in.

If anyone understands what Luke could be thinking as a contestant, it would be a Bachelor alum. However, it doesn't seem like any of them sympathize with him. They pretty much all want him to go. That may not happen for a while though, since Hannah seems to be super into him.

On the pageant group date, Luke P. used the talent portion of the competition to tell Hannah that he was "genuinely falling in love" with her. Reminder, this was only the second episode. This moment happened in front of other contestants, a room full of fans, oh yeah, and viewers at home. Hannah declared that she "believed" Luke. In contrast, Bachelor and Bachelorette alums do *not* believe anything he's saying.

If only Hannah was able to consult them while she was filming the show. It has to be so awkward to watch those scenes and to read all of the Twitter reactions to Luke, especially from former cast members. Here's a round-up of those responses.

Bachelor Season 21 lead and three-time contestant Nick Viall has been very vocal about his distaste for Luke. He cannot stand the guy. Let's just hope Luke hasn't seen Nick's tweets... or the tweets from other franchise alums.

Bachelor Season 23 contestant, and good friend of Hannah, Demi Burnett quoted Nick's tweet about Luke. She also shot down comparisons that people made about her and Luke. They both massaged the lead of their season during a cocktail party, but Demi insisted that she's nothing like him.

Ashley Iaconetti usually keeps it positive when it comes to her Bachelor commentary. However, the Bachelor in Paradise standout "can't" with Luke and she's not the only one.

Season 13 Bachelorette lead Rachel Lindsay never holds back. She keeps it 100 at all times. She sees right through Luke and seems worried about Hannah's interest in him.

Ben Higgins seems like one of the nicest guys on the planet, but even he can't help cringing over Luke's premature love declaration.

Tanner did not mince words at all. All of the Not all of the Bachelor alums were this frank, but plenty were close with their remarks.

Even before the second episode aired, Jared Haibon had his reservations about Luke. Unfortunately, no, the context of the episode did not help. Luke said he was falling in love with Hannah during their first date. In a group setting. Yikes.

Duke Peth was right. Luke does have a tendency to swoop in when Hannah is vulnerable. During Night One, Luke followed Hannah outside after she said she needed a minute to herself, but failed to offer his jacket when she said she was cold. Multiple times. He even snuck to surprise her in while she was recording an interview after the rose ceremony. He's coming on very strong.

To be fair, this episode is an edited version of what happened during the time period. It's impossible to show all of the footage within the time frame of one episode. Nevertheless, if Bachelor alums think Luke is moving too fast, Luke is probably moving too fast.