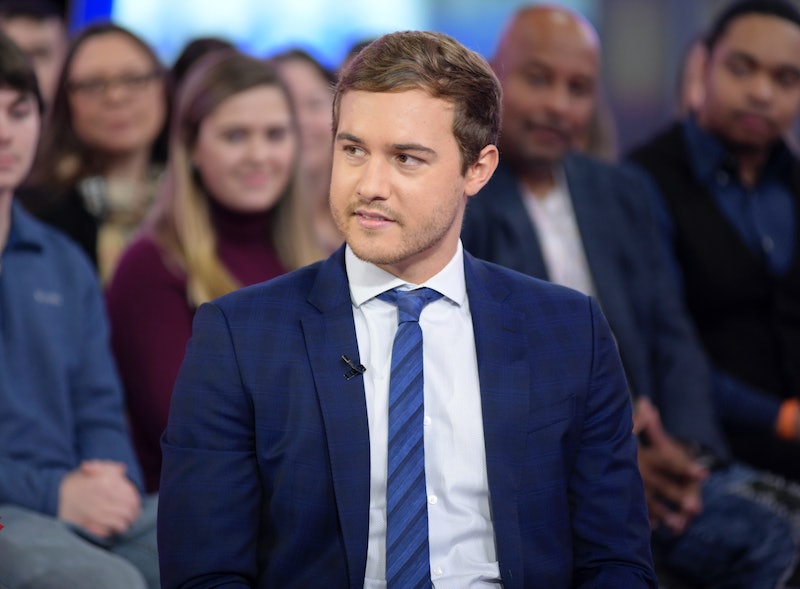 This week's Bachelor episode ended on a somber note, leaving the fate of Madison and Peter's relationship up in the air. But for some fans, their romance was already on the brink of turmoil long before Fantasy Suite dates had come and gone. And it wasn't because of their feelings for each other, but due to something much more sinister. After the rose ceremony in the airplane hangar, when the duo went outside to talk, Peter didn't offer Madison his coat on The Bachelor, despite the fact that she was clearly shivering. She even went so far as to comment on how cold it was, and yet Peter's jacket remained squarely on his warm, insulated shoulders.

Many of you (including yours truly) may have found yourselves yelling at the television screen, scolding the pilot for his lack of chivalry. However, it turns out that Peter may not be to blame for the incident at all. In fact, according to Entertainment Weekly, there's a reason the Bachelor never offers his coat to contestants, regardless of any chilly weather conditions.

“The Bachelor nearly always offers his jacket to every shivering woman sitting in front of him,” an unnamed producer explained to EW. “But [we] tell him not to, because it looks so damn silly.” Bustle reached out to Peter for comment on the matter, but had yet to hear back at the time of publication.

The "silliness" the producer seems to be referring to is what it would look like to see the Bachelor talking to “a small woman draped in an enormous blazer." So as a solution to the problem, the show apparently keeps a stock of pashminas on hand for any woman who is in need of an extra layer or two.

This discovery aligns with an incident EW writer Kristen Baldwin says she witnessed while on the set of Colton's season back in 2018. Baldwin observed Colton chatting with a woman outside, who began to shiver, but when he started to take off his jacket a producer stopped him. “I love freezing,” the woman joked at the time. “Freezing’s great.”

May this be a lesson to all those who are thinking of embarking on this Bachelor journey in the future. Get ready for some potential heartache — and don't forget to pack an extra sweater or two just in case.