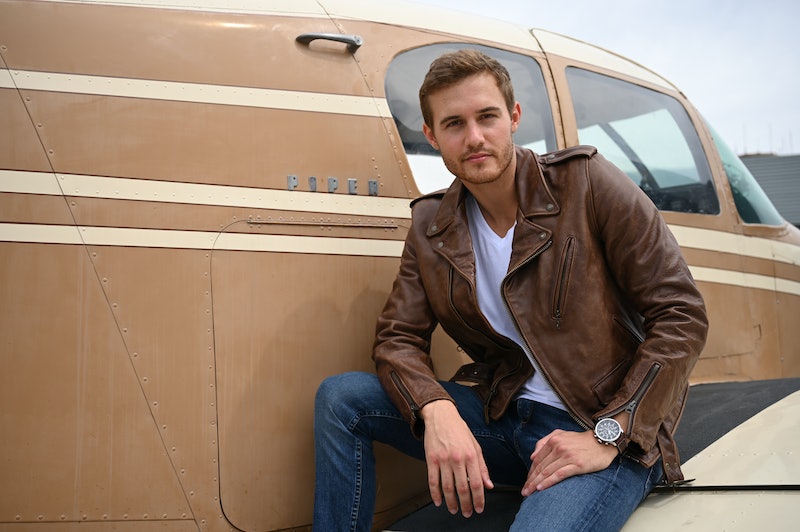 Peter Weber may be hoping to put a ring on some lucky lady's finger at the end of The Bachelor; however, the charming pilot already has an eye-catching item on his own hand that instantly caught the attention of fans on Monday's episode. While on his one-on-one date with Sydney, the cameras panned over the duo, revealing that Peter has a mysterious finger tattoo that somehow none of us had noticed. So, while he may claim to be an open book on the show, it seems this Bachelor still has a few interesting secrets up this sleeve (or rather, on his finger).

It all started when the camera zoomed in to get a close up on Peter and Sydney's very steamy make-out session. Peter placed his hand on the nape of her neck, which is when a very small tattoo could be detected on the inner part of his left pointer finger. Given the angle of the shot, it was impossible to know what exactly the tattoo was of or the meaning behind it. But, of course, that didn't stop fans from trying to figure out what it could be and wondering how they had never noticed the marking before now.

Considering how much attention has been on Peter over the last year, it's shocking to think that so little is known about his tattoo. However, it seems he did discuss this specific piece of body art with Us Weekly back in January for the outlet's 25 Things You Don't Know About Me Vertical.

It's here that Peter divulges not only what the tattoo is, but also what prompted him to get it in the first place. Evidently, the ink is of the number 12. Why 12? "My brother and I got matching tattoos of the number 12 for our favorite team, the Seattle Seahawks, after they won the Super Bowl," Peter told the outlet.

The Seattle Seahawks won the Super Bowl against the Denver Broncos back in 2014, which means Peter has had this tattoo for around six years. It kind of makes you wonder if Peter has any other surprise tattoos located on his body. (How can there not be a plane-related one?) But at least we can all put this particular mystery to bed once and for all.