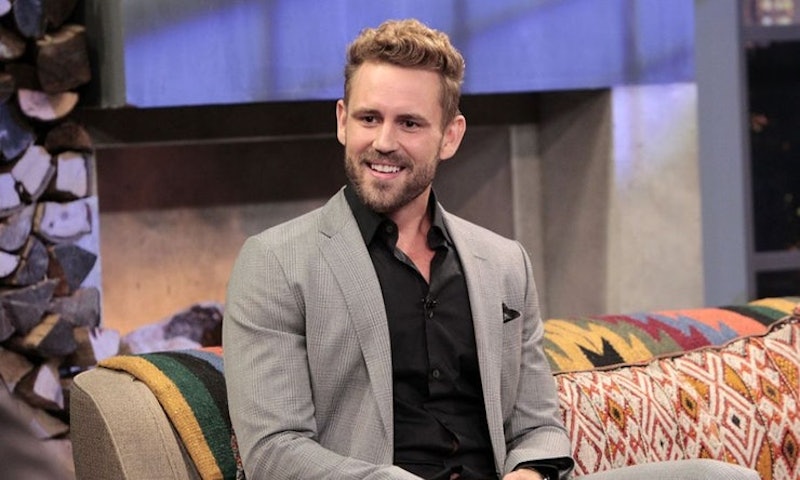 As redundant as this statement sounds: Nick Viall is returning to TV. To most Bachelor fans it probably feels like the most recent lead of the series has never left television, but he will actually be doing something different than his past gigs. This time, Nick is not doing reality TV.

That's right. The two-time Bachelorette runner-up is a bona fide actor now. Well, maybe that's a stretch, but he is technically an actor now, and he is taking on a guest role on the ABC show Speechless, according to Deadline. This means that he will be getting a (non-reality TV) IMDb credit to his name.

Deadline describes Nick's character, Tyson, as a "hunky B-movie actor who takes his craft way too seriously." That sounds about right. If only Tyson was a reality TV star-turned-actor who revels in taking shirtless mirror selfies, then it would really be a case of art imitating life. Nick's episode is set to air in late November. No word yet if there will be any shirtless moments.

Deadline's episode description reads, "After befriending JJ (Micah Fowler) on a set, Tyson summons all his powers for the performance of a lifetime, deceiving Maya (Minnie Driver) and Jimmy (John Ross Bowie) to get JJ out of hot water." So, Nick is playing an actor who will pull off the "performance of a lifetime." This will be interesting.

Nick has been polarizing since the start of his "journey" in the Bachelor franchise, but Nick loyalists and Nick detractors will both get a kick out of this one. Sure, it will be for different reasons, but pretty much everything Nick does garners attention Bachelor Nation.

That said, there are some fans of the franchise who feel like Nick is over saturating the ABC network with all of these appearances — he was on two seasons of The Bachelorette, followed by Bachelor in Paradise, The Bachelor, and Dancing With the Stars. And the conversation started long before his role on Speechless was announced.

Nick is really riding out those 15 minutes of fame. Good for him, but wow, that sure is a lot of Nick Viall. Love him or hate him, apparently he is here to stay.

Nick did not end up with Andi Dorfman, Kaitlyn Bristowe, Jen Saviano, or Vanessa Grimaldi during his time on the Bachelor franchise, but there is clearly someone (or multiple people) at ABC who has a lot of love for him since he seems to have a tenure on the channel.

Nick has not yet posted about the new gig on Twitter or Instagram, but it's likely he will share some pics from the set or promote his guest spot closer to its air date.

Some Bachelor fanatics may be surprised by Nick's foray into the scripted arena, but people who follow Nick's life in between reality seasons will not be shocked at all by this move. It was only a matter of time, because Nick moved from Chicago to Los Angeles before he was even the Bachelor and has reportedly been taking steps to make the move into acting for a while now by signing up for acting class, according to Entertainment Tonight.

Can someone in this acting class take Nick's phone and hit "record," so Nick can post some videos of his monologues to Instagram? Seeing him get emotional over something other than a rose ceremony would be prime social media content. That's probably not something that will ever happen, so anyone who is interested in checking out Nick's acting chops will have to tune in when his episode of Speechless airs in November.