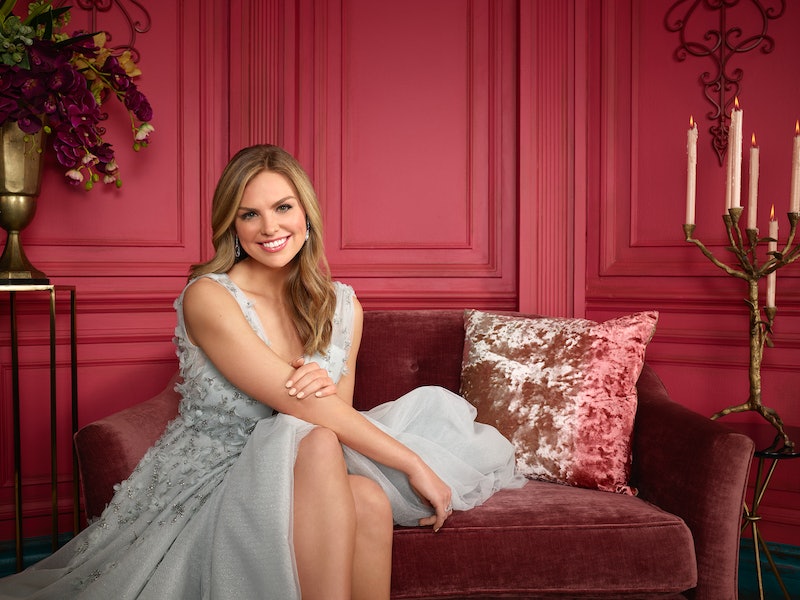 "The Beast" is back on social media. ABC's newest Bachelorette, Hannah B, returned to Instagram for the first time since filming the reality dating competition earlier this year with a laid back (literally) May 15 post. Allow the Alabama beauty queen to re-introduce herself.

"Hi, my name is Hannah and I’m the Bachelorette. (Wow-what!?)," she captioned the two-photo carousel. "This experience has been something else. I am beyond grateful, but dang somebody should have warned me that dating 30 men ain’t easy! I’m still recovering, but don’t worry, the Beast is back y’all!"

For reference, the Bachelorette star playfully dubbed herself "Hannah Beast" following one of many onscreen confrontations with rival and fellow Miss USA 2018 competitor Caelynn (AKA Miss North Carolina) during her time on Colton Underwood's season of The Bachelor. She's since, of course, fully embraced the nickname.

In her two Instagram photos, a smiling Hannah is lounging on a sofa, wearing the same stunning Randi Rahm gown and Stuart Weitzman heels she rocked during The Bachelorette's May 13 premiere episode. Prior to her new post, Hannah's last Instagram upload came on March 13 and included a childhood photo of herself dressed as a bride along with the caption "Wish me luck, y'all. #thebachelorette."

Of course, following a two-month social media hiatus while filming, Hannah had to make up for lost time. In her Instagram Story, she also posted several videos and photos that truly showed off her silly sense of humor. To start, she included a series of three videos showing herself attempting to kick a field goal on an Alabama football field. "Most dramatic field goal ever," she wrote on one post. Hannah also added that "it doesn't matter that I'm a girl, I'm a beast" before poking fun at herself for tripping "on air."

A subsequent post showed a picture of her and Bachelor host Chris Harrison cheers-ing with coffee mugs during a breakfast. "Awww memories and carbs with Chris," she wrote. At the bottom of the photo, she included the text "started from the biscuits..." and finished the sentence in the next slide "now we're here," along with a premiere night photo of the duo at Bachelor mansion and the audio to Drake's "Started From the Bottom."

Finally, Hannah turned her back to the camera for her final two videos. "How I prepare for my first night as bachelorette: booty shakes and climbing up walls," read her caption. And in the final Instagram Story post, she included the text overlay, "You Better Work Bach."

Hannah's season of The Bachelorette won't necessarily be all fun and games, however, according to Brooke Karzen, who helped develop and oversees the series. “There’s ups and downs; it’s an absolute roller coaster,” she told Vanity Fair in a recent interview. “She takes the gloves off, she tells the guys off, she stands her ground, but I don’t think any of that is surprising to you. I think what’s really going to be surprising is how’s it all going to end."

Bachelor Nation will assuredly be glued to their TVs this season to find out.