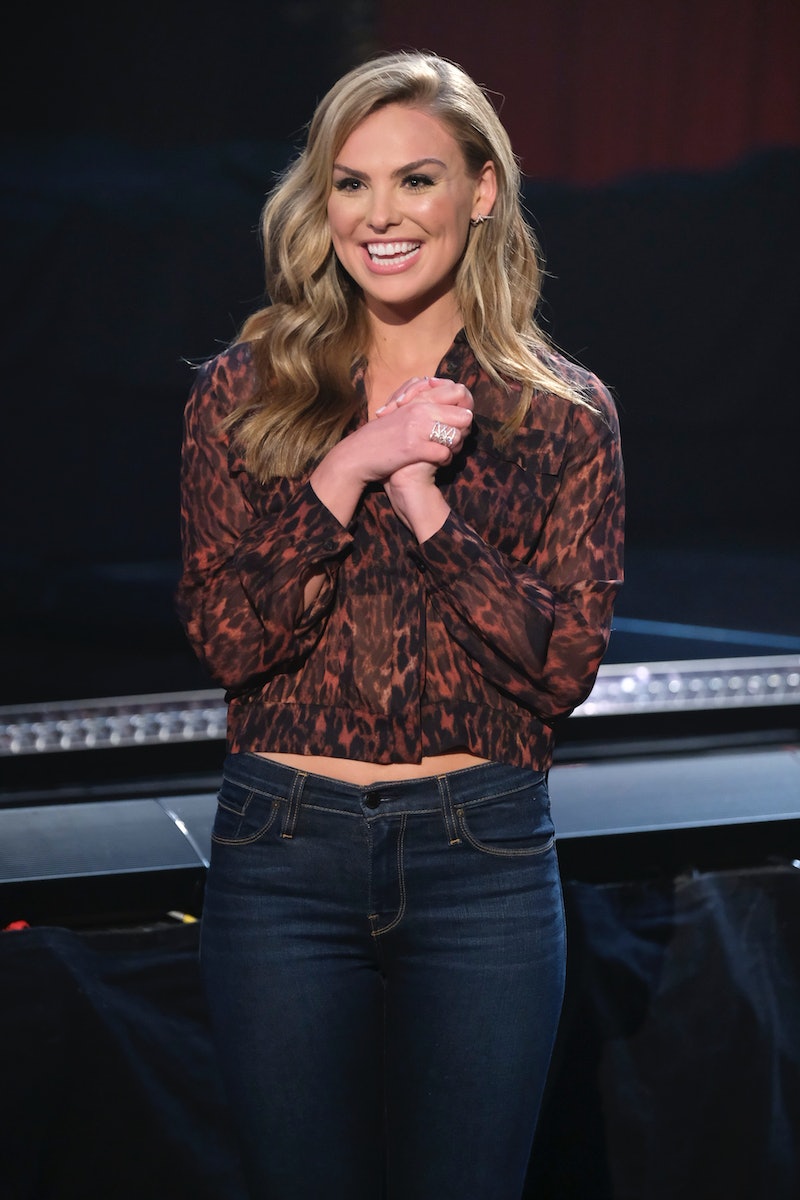 For those who are glued to their TVs during the new season of The Bachelorette, you've got some famous company. On Tuesday, May 21, Demi Lovato declared herself a fan of The Bachelorette when she watched the show for the first time with her mom. Her thoughts on the season (not a fan of Luke P.) and excitement for Hannah Brown as the lead were documented on Lovato's Instagram Stories. And now, Bachelorette star Hannah has responded to Demi Lovato, and it looks like the beginning of a beautiful friendship.

On the singer's Instagram Story, Lovato wrote over a video of Hannah during her first one-on-one date of the season, "I've never watched the Bachelorette or the Bachelor but she is soooo cute!!" And word of the compliment quickly got back to the star herself.

Hannah tweeted her excitement over the Lovato shoutout on Wednesday writing, "Nobody: (blank) Me for the rest of my life: Demi Lovato called me cute!" alongside a screenshot of Lovato's Instagram Stories. While the new Bachelorette was clearly giddy over her high-profile fan, this isn't the first Demi to play a role in Hannah's season so far. Demi Burnett, who was a major topic of conversation during Colton Underwood's season of The Bachelor and became one of Hannah's besties, actually appeared on the premiere of The Bachelorette alongside former contestant Katie Morton.

Burnett's Instagram handle is, hilariously enough, @demi_not_lovato. So, when the reality star heard about another famous Demi's love for Hannah, she tweeted her own response. "The awkward moment when Demi Lovato is posting about The Bachelorette and she has no idea the bachelorette’s bestie goes by Demi Not Lovato," Burnett tweeted on Wednesday, acknowledging the funny celebrity coincidence.

Burnett and Katie helped monitor Hannah's contestants on night one of this season from a covert fan, offering feedback and searching for a problematic contestant. The pair was able to track down Scott — someone who had a girlfriend back home. Burnett had even read recent messages between Scott's girlfriend and her friends about his plans to reportedly reunite with her after he was sent home.

That moment happened sooner than expected for the controversial contestant. Suffice it to say, Scott was sent packing and Hannah's pals proved helpful in eliminating a man who could have been guilty of the dreaded "not there for the right reasons" narrative. Now, if Lovato was on the surveillance team, there's a good chance she would advocate for Luke P.'s elimination. A large portion of her Instagram Stories commentary was focused on her dislike for the contestant, who declared his premature love for Hannah in episode two. At one point, Lovato even wrote, "Hannah, honey, do not trust him!!!!!!"

The "Cool for the Summer" singer may be onto something as Hannah recently revealed in an interview with Entertainment Tonight that things could be headed in a rocky direction for her and Luke P. When asked which contestant made Hannah cry the most on her season, she replied with Luke's name. But she only teased, "We'll see," as the reason for the tear shed.

For now, the waterworks are mostly on the wayside as Hannah celebrates her new season with the likes of Lovato watching. Only time will tell if her newest fan's intuition will prove correct.