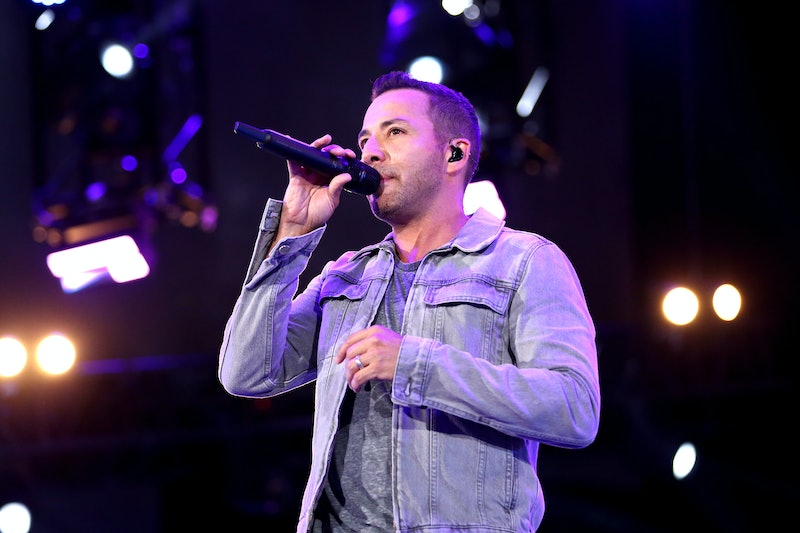 In the wake of their headline-making performance at Coachella, there are quite a few people asking for *NSYNC to reunite properly — including some of their fellow boy band members. In a recent interview with Entertainment Tonight, Backstreet Boys' Howie Dorough encouraged *NSYNC to reunite without Justin Timberlake, and even proposed the possibility of a joint BSB/*NSYNC tour in the future.

JC Chasez, Joey Fatone, Lance Bass, and Chris Kirkpatrick surprised fans everywhere when they joined Ariana Grande onstage during her headlining Coachella performance in April, where they performed "It Makes Me Ill" and "Tearing Up My Heart" with the singer. Though Timberlake didn't participate in the performance, as Fatone told TMZ that he was on tour during the band's rehearsals for the festival, that didn't stop fans from wanting the band to embark on a proper reunion tour, with or without its most famous member. As it turns out, Dorough has actually been encouraging them to do just that for years, he told ET.

"I’ve definitely talked with Joey [Fatone] before about us doing something," Dorough revealed, adding, "I’ve even encouraged them to go on themselves and keep performing. We were once four. I’m like, 'Dude, if we can do it the four of us, so can you!'" (Kevin Richardson left the Backstreet Boys in 2006, before rejoining the band in 2012.)

Granted, Dorough did admit that it might be a little more difficult for *NSYNC to tour without Timberlake than it was for the Backstreet Boys to perform without Richardson. "Obviously, Justin was a main lead in that group so I know it's a little bit different," he said. "With Kevin or myself, back in the day, it [wasn’t] as hard to go on as four. If it was Nick, AJ or Brian who had left, it might have been more challenging."

"But I still think that there are fans out there, who would love to see them and who would hate for them not to continue on just because one other person is doing his own thing," Dorough continued. "So, I’m always encouraging them — and all the other groups from the past that are out there too. I feel like nowadays we only help each other continue the pop scene and the nostalgia."

Howie D isn't the only member of the Backstreet Boys who would love to see their fellow boy band icons hit the road once more; in late April, AJ McLean pitched a joint *NSYNC and Backstreet Boys reunion tour during an appearance on the LADYGANG podcast. "I think Justin should come back. One tour. All ten of us go out. Stadiums," he said, imploring the "SexyBack" singer to give fans what they've wanted for years. "It would be the biggest thing since sliced bread."

McLean even called out Timberlake by name on the podcast, saying "I think [a joint tour] be awesome," and telling the singer to call him so they could "just talk about it!"

Fellow band member Nick Carter also proposed a possible joint reunion tour after *NSYNC's Coachella performance, by responding to a Rolling Stone article that proposed the band tour without its most famous member. "The world of pop needs this to happen," Carter wrote on Twitter. "I’d go and watch them. Hell, maybe one day we could even do an #nsyncbackstreetTour or #nsyncbackstreetsong together."

Clearly, there is plenty of support for a future *NSYNC reunion tour — with or without Timberlake on board. If all of the fan support isn't enough to convince the band to say "Bye, Bye, Bye" to their hiatus, maybe the overwhelming call from their fellow '90s pop icons might just convince them to hit the road once more.

More like this
A New 'And Just Like That' Table Read Pic Confirms A Key Character's Return
By Jack Irvin and Grace Wehniainen
Everything You Need To Know About ‘Black Panther: Wakanda Forever’
By Bustle Editors
Craig David Is Still Slicker Than Your Average
By Olivia-Anne Cleary
The Spice Girls Just Dropped A Brand New Music Video
By Sam Ramsden
Get Even More From Bustle — Sign Up For The Newsletter