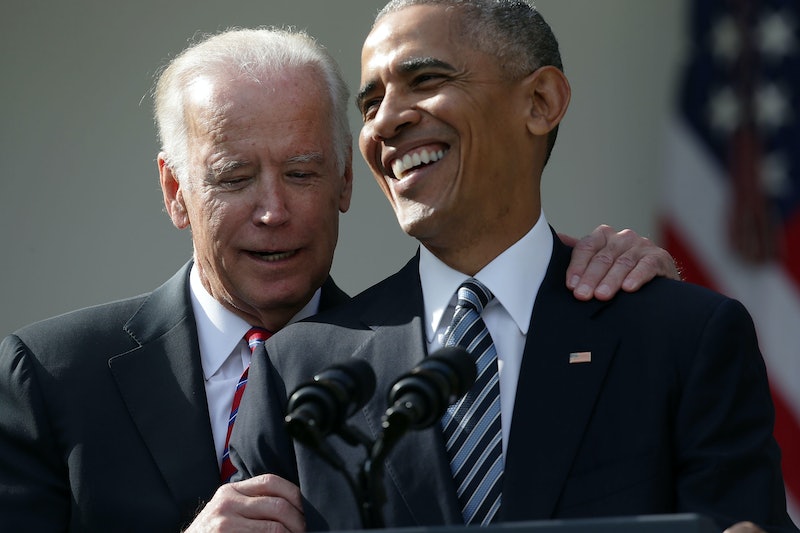 Former President Barack Obama continued the internet's favorite bromance on Saturday with a sweet Instagram post. Obama welcomed Joe Biden back to Instagram with a throwback selfie of the pair — with the most Obama caption to match.

"My brother and friend @JoeBiden is back on Instagram. Welcome back, Joe—you'll always be one of the rare exceptions to my no-selfies rule," Obama wrote in his caption of the incredibly smiley photo of the two men.

Based on their clothing, it looks like the photo is one Biden took when the pair went to Dog Tag Bakery in Washington, D.C. in July. The bakery trains veterans and their spouses on the ins and outs of running a business. Biden shared the photo on Twitter when he wished Obama a happy birthday:

"Our lunches together were a highlight of every week at the White House." Biden wrote on Twitter on Aug. 4. "Last week's trip to @DogTagBakery was no different. Happy birthday to my brother, my friend, @BarackObama."

Biden has only posted one photo on Instagram since returning to the platform on Thursday. The post was a photo of Biden in New York with wounded veterans who walked across the country to raise awareness for vets with post-traumatic stress disorder and traumatic brain injuries.

Previously, Biden posted on Instagram on the handle @vp. All of his posts during the two Obama administrations are now archived.

Comments on Obama's Saturday post fall into a few categories. There are those who love the Obama-Biden bromance, those who desperately wish Joe Biden would run for president in 2020, those who wish Obama and Biden were still in office, and those praising Obama for his class.

Those who were worried that the two wouldn't stay friends after they left the White House had their fears abated long ago, when the two went to Toronto in September 2017 to hang out at the Invictus Games with Prince Harry (yes, the Prince Harry). The Invictus Games "is an international sporting event for wounded, injured and sick Servicemen and women, both serving and veterans," according to the organization's website.

The bromance continues. It’s not ended. That’s one of the things I would say, you know… What does [Obama] miss about the White House? I mean, they had lunch every single week for eight years.

The two also continue to support each other in politics. Obama delivered a passionate speech Friday to students at the University of Illinois-Urbana Champaign, where he offered some of his most scathing criticism of President Donald Trump since the 2016 election. He told the students they "happen to be coming of age," amid a backlash to progress that's been occurring for some time. He continued, according to CNN:

It did not start with Donald Trump, he is a symptom, not the cause. He is just capitalizing on resentment that politicians have been fanning for years. A fear, an anger that is rooted in our past but is also borne in our enormous upheavals that have taken place in your brief lifetimes.

Inspiring words from @BarackObama today. A powerful reminder that it's on all of us to vote this fall if we want leaders who reflect the civility, character, dignity, and goodness of the American people. The stakes couldn't be higher, but Americans always rise to the occasion.

Though messages like the one Obama posted to Twitter are characteristic of their friendship (or, the bromance, as the internet would say), it's clear that they're stepping into the spotlight once more as something even more powerful: a political team, willing to do whatever it takes to help the American people.