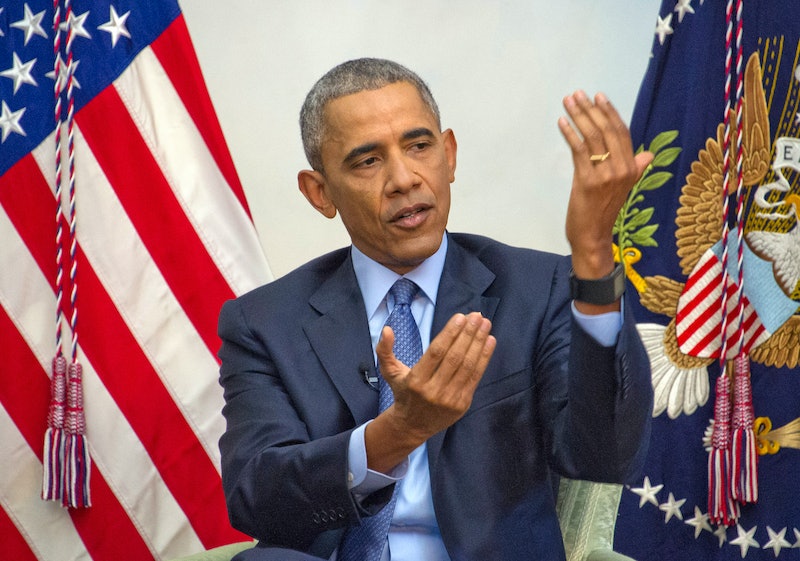 In Washington, D.C., these days, the impending ascension of Donald Trump to the presidency has a slew of his core issues and proposals on everyone's minds. For instance, you've got retaliatory tariffs on manufacturers who move American jobs out of the country, big corporate tax cuts, the stripping of business regulations, and, of course, the border wall with Mexico. But, as TMZ noted, there's an altogether different wall going up in the nation's capital right now ― a wall being built around Barack Obama's post-presidential home.

Needless to say, perhaps, but any attempt to make the case that the Democrats and/or Obama are being hypocritical about wall-building is absurd in the extreme. The policy question of whether a wall should be built along the southern border of the United States ― a question with fiscal implications, debates about efficacy, and wrapped up in the teeming racial and xenophobic messaging of the Trump campaign ― has nothing whatsoever to do with the layout of the Obama family's soon-to-be D.C. rental.

Matters of national character and immigration policy, in other words, are not in any meaningful respect relevant to matters of post-presidential security.

Setting all that aside, however, the wall is being built around the property to aide the job of the Secret Service, as keeping Obama safe will continue to their job they're tasked with even after his presidency ends. And the property ― a multi-story brick manor owned by former Clinton administration Press Secretary Joe Lockhart ― is rather exposed, sitting right on the street.

As CNN reported back in May of 2016, the house was always going to be due for some big security upgrades if and when the Obamas moved in. Specifically, former Secret Service Assistant Director Anthony Chapa cited the need for bulletproof windows and doors, better outside lighting, and electronic monitoring of the surrounding area, among other things.

Last March, Obama acknowledged that the family would continue to live in Washington, D.C. for at least a couple of years, thus allowing his daughter Sasha to finish out her high school years at the elite K-12 Sidwell Friends school. As he said at the time: "Transferring someone in the middle of high school? Tough."

In other words, the family will be staying in the nation's capital to ease the transition for Sasha, and as such, their newest pad needs to be secure as can be. Suffice it to say, it'll be pretty well decked-out by the time the renovations are done ― the former president, for his part, may reportedly turn the garage into his office, which ought to be a real "life comes at you fast" moment.