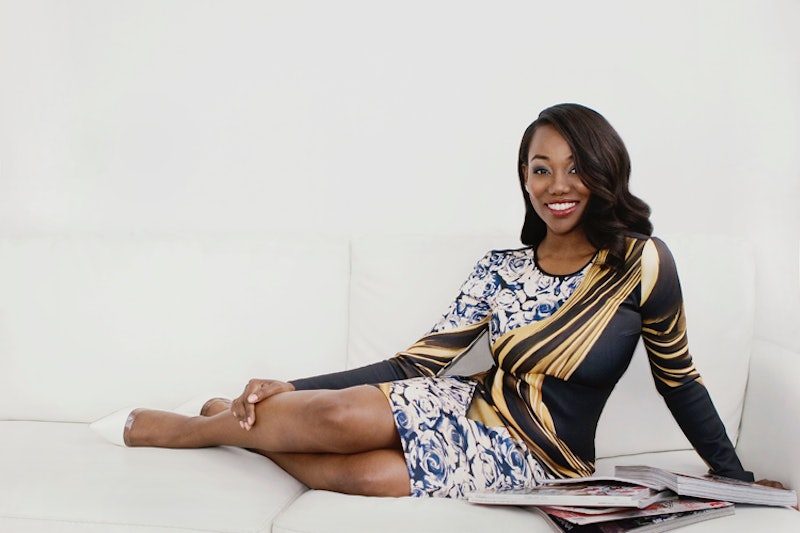 There’s a certain image of successful people that we’ve been sold over and over and over. They all get up before the crack of dawn. They all have highly specialized plans and meticulous habits. And, of course, they’ve got an insatiable thirst for the hustle. Tech entrepreneur and “licensed therapist who is fun at parties” Bea Arthur, however, defies that image at almost every turn. While she certainly caught a hankering for the hustle, she’s got blinders between her and every other how-to guide for future business leaders and, despite some past stumbles, she clearly wouldn’t have it any other way.

“Oh my God, pajamas as daywear was literally my idea,” she says when we speak one December afternoon, in stark defiance of a recent work-from-home wardrobe suggestion involving $645 loafers. Arthur frequently works from home (in PJs, thankyouverymuch) or with her co-founder out of New York’s branch of The Wing, but today, she flew where the wind took her: From a shopping trip to DSW, to getting her wig fixed, to her friend’s office, where she’s now sitting in a t-shirt and ripped jeans. “I didn’t even shower today,” she admits with a carefree chuckle. Though she’s the founder of a tech company, speaking with Arthur feels more like chatting with a long-lost friend than an intimidating titan of industry.

And yet, the 35-year-old currently runs a virtual therapy company that she co-founded called The Difference, which uses Amazon’s Alexa to set users up with on-demand therapy sessions the moment something frustrating, upsetting, or sad happens, as an alternative to waiting for a regular therapy session, which can be costly and tough to schedule during actual moments of crisis. “There needs to be an affordable therapy option for people who don't have insurance, that's easy to access, that takes out all the barriers to entry,” says Arthur (such barriers include costs up to $200 and even $300 per session and the fact that according to a 2014 study, only 55 percent of insurance providers cover mental health care). “I think the world will be a happier, healthier place if people have the freedom and the control and the power and the peace in their lives to make [therapy] work for them.”

Her previous company, In Your Corner (formerly known as Pretty Padded Room), also focused on opening up that access, by creating a women-centric community and making therapy available online, but she didn’t just appear at this intersection between tech and psych overnight. Arthur had a whirlwind of a professional life before finding her way here, going through four different careers (from a stint at Bloomberg, to working in art galleries, to hustling as a personal trainer, to the real estate world) before grad school, where she discovered her true professional love: psychology. “Even when I first moved to New York in 2005, I was very ambitious as an undergrad. I took all these unpaid internships that they gave me credit for. I was a dummy who wanted to be an adult and know what I was doing, so I crashed and burned a lot because even though I was really ambitious, I didn't know what I wanted to do,” she says. And that lack of knowing was a major problem. “I wasn't getting hired. I had all this personality and all this extra energy ... but I also quit a lot because I'm kind of a baby and if I don't like doing it I'm not going to do a good job. So I just didn't last very long; I'd either get fired or quit.”

She finally found her way to something that spoke to her — speaking to others. “It you look at my history, all of them have been client facing; like art, financial advising, real estate, they're all client-facing roles. So psych was like the ultimate. Literally, I just get to talk to people. I'm a professional people person,” she says. After grad school, that discovery drove her to start he first claim to fame, In Your Corner, which was hailed across the internet for its devotion to making therapy accessible. Though it eventually shuttered, the attempt served Arthur her first slate of professional wins. But, much like her spontaneous workday, she wasn’t planning to create a full-on start-up, necessarily — she just wanted to pay her student loans.

“I was a domestic violence counselor making $38,000. I [couldn’t] even afford to pay my rent. So I started the company out of necessity. I was going to starve — my student loans cost twice as much as that because I went to Columbia,” she says, adding that even the company landing a coveted spot in Y Combinator (a funding group that helped fund the launches of AirBnB, Twitch, DropBox, and Reddit) wasn’t something she totally planned for. “I walked ass-backwards into tech. When I got into Y Combinator, I was the first black woman [to be accepted] and I didn't even know what it was. I always say I'm lucky I didn't. If I had known what it was and what it was for, I wouldn't have applied.”

When In Your Corner failed, however, Arthur was devastated. The company that wasn’t supposed to be a company had become her whole life, and when it wasn’t anymore, the earth seemed to fall out from under her. “I was devastated. When we died, I died,” she admits. “I gained all this weight, I just like masturbated and cried for most days for a full six months. I was just a different person.” But when the fog started to lift a bit, one piece remained clear: The mission wasn’t the problem. There were other ways to accomplish this democratization of therapy. “When I came out of it, my mom [said] ‘Just because it didn't work out, doesn’t mean it didn’t work.’ And to this day, I still get messages from Australia and Dubai and it’s kind of like what I think about The Difference now: This is bigger than me.”

Now, Arthur — who boldly wrote an article for Forbes, all about why her first therapy start-up failed — is learning from her past mistakes and learning more about the world she’s found herself in. “I've learned a lot about tech. I still can't code — I don't want to code because that's not my strength — but I can read code,” she offers. “A lot of the investors cringe when you say ‘mental health,’ but I know how to talk about the market size now.” But despite the fact that she is learning more, she’s not about to do it the way she’s “supposed” to — even if that means (gasp) letting her coworkers, colleagues, or investors know when she’s got a gap in knowledge.

“[In a meeting] if I don't know what that means, I'll just say, ‘I don't know what that means. Tell me.’” she says. “I'm not going to nod along and miss the opportunity to learn because that's where I f*cked up last time, trying to figure out too much on my own.” She’s also committed to continually being the person in the room “looking at what happened on Real Housewives on Twitter while everybody else in the room is talking about Geo-tracking tags.” She’s simply found that results are better when she’s honest about who she is.

“Being humble and being very open about what your strengths are and what you don't know will make people more likely to help you,” she advises, surely sending a shiver down the spines of CEOs everywhere.

Of course, the one thing that you can expect about Arthur, is that when you wait patiently until the very end of the conversation to sheepishly point out that she shares a name with a famous Golden Girl, she will tell you that she's heard it many, many times before. "I lived in Chelsea for 10 years," she says with a knowing laugh. She’s been stopped at the grocery store only to be regaled with Bea Arthur facts, so clearly, this coincidence can’t be all the amusing anymore. “My parents are from Ghana, from the village. They did not have a TV and if they did, they were not watching Maude,” she says with a chuckle. But just when you think she’d do just about anything to change the topic of conversation from the celebrity wrecking her Google ranking, Arthur throws one last, simple curveball for the road: "I love her."

Of course she does.

More like this
These Are The Fastest Electric Kettles You Can Buy
By Margeaux Baulch Klein
This Is When Netflix Is Going To Start Charging You For Sharing Passwords
By Darshita Goyal
11 Super Bowl Instagram Captions To Use On Game Day — Even If You Don’t Like Sports
By Alexis Morillo
Flip Phones Are Gen Z's Favorite New Nightlife Accessory
By Maria Santa Poggi
Get Even More From Bustle — Sign Up For The Newsletter
From hair trends to relationship advice, our daily newsletter has everything you need to sound like a person who’s on TikTok, even if you aren’t.