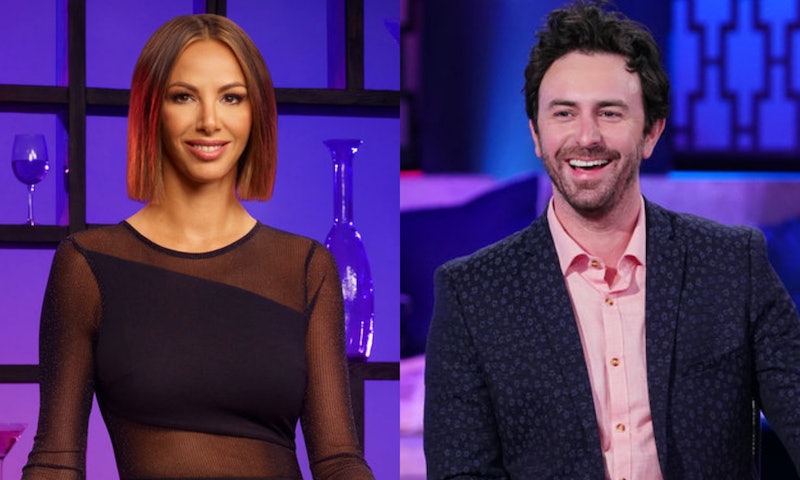 Stassi Schroeder has gone through a lot to find love on Vanderpump Rules, but now, she's finally with someone who seems perfect for her — and who treats her right. We already know her co-stars and longtime friends Kristen Doute and Katie Maloney-Schwartz are the ones who set her up with Beau Clark, a kind and hilarious addition to the show this season. But did you know it all started because Kristen and Beau filmed a movie together almost 10 years ago? The film — a 2010 short called The Loneliness of the Long Distance Dreamer — may not have gotten that many eyes on it at first, but it did end up having a major impact on the Pump Rules cast.

According to the movie's IMDb page, it's about a man named Decker Lonely. "Tired of living up to his name, [he] chases after the girl of his dreams, in his actual dreams," the synopsis reads. "Leading up to this journey, Decker receives guidance from the insightful Sig Freud, only to send him running on a wandering road of fantasies and dangerous distractions."

Beau played the protagonist, and Kristen is only credited as "Tripping Bikini Girl." Sure, it's not the stuff that Academy Award dreams are made of, but everyone has to start somewhere, right? The most interesting part about the whole thing is that Beau and Kristen actually kiss in the film, meaning that Kristen and Stassi have both snogged this man. See it for yourself below — their makeout scene opens the film, and they briefly share the screen again around the 14-minute mark. Man, do they both look so different.

Years later, Stassi explained on What What Happens Live, "Katie saw him at The Grove and looked over and said, 'That's a dude that I think Stassi would love.'" Stassi told host Andy Cohen that at the time, she was getting over her ex Patrick Meagher, and that she and Beau were both initially reluctant to meet. But then Kristen had a party for the Conor McGregor vs. Floyd Mayweather fight and sneakily invited both of them. "Once I finally went through my real breakup with my ex-boyfriend, then she kind of forced us to meet," Stassi said on a recent Vanderpump Rules After Show.

"The minute [Stassi] walked in, I was like, 'F*cking Kristen. God,'" Beau added. "Blind dates, the awkwardness, ‘cause now I know that I have to meet her and say hello and I knew what Kristen was doing. And I got a little insecure and, you know, uncomfortable because [Stassi is] pretty and very bossy." After an hour and a half, Stassi finally marched up to Beau and introduced herself in person, and the rest is television history.

Who would have thought that one little film — and one big makeout — would have led Stassi to the love of her life? After so many bad relationships, Vanderpump Rules fans are probably very happy Kristen landed a role in that short film.

More like this
The Real Housewives Of Potomac Break Down The Season 7 Premiere
By Jake Viswanath
Everything To Know About 'Bling Empire: New York'
By Kadin Burnett
The 'Love Is Blind' Season 3 Trailer Teases A Possible Fiancée Swap
By Kadin Burnett, Grace Wehniainen and Gabrielle Bondi
Kesha Is Down To Be The Next Bachelorette
By Jake Viswanath
Get Even More From Bustle — Sign Up For The Newsletter