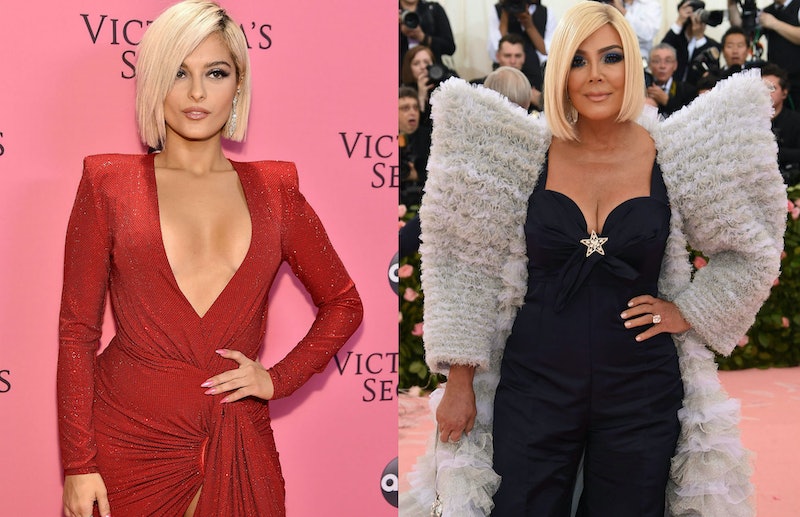 After receiving many comments on Twitter during the 2019 Met Gala held on Monday, May 6, Bebe Rexha responded to the Kris Jenner comparisons with her stamp of approval. During the annual fundraising gala that benefits the Metropolitan Museum of Art's Costume Institute in New York City, people couldn't help but point out how much Kris resembled Rexha. If you didn't see, the Keeping Up With the Kardashians star debuted a blonde bob as part of the "Camp: Notes on Fashion" theme.

After Kris arrived on the pink carpet alongside her boyfriend, Corey Gamble, many fans thought the momager was channeling her inner Rexha. The comparison is one the musician welcomed with open arms, too.

In addition to retweeting multiple fan reactions comparing herself and Kris, the "In The Name Of Love" singer also replied to a fan's tweet that was captioned, "bebe you looked STUNNING." Rexha responded with so much love by writing, "Omg thank you!!!"

She didn't stop there, but tweeted later on how big of an honor it actually is to be compared to Kris. Apparently, Rexha admires the Kardashian-Jenner matriarch. As she tweeted,

"Bet you didn’t know I could be in two places at once. I was in Nashville last night recording my next album and in New York at the Met Gala at the same time. In all seriousness, kris Jenner is a bad ass women who created an empire. It’s a compliment. Love you guys."

There's no denying the two resemble each other. Really, their blonde bobs are the reason they look so much alike. At this time, it doesn't appear that Kris has responded to the comparisons, but it seems likely that she'd consider them a great compliment, just like Rexha.

If you didn't see any of the tweets comparing Kris and the "Me, Myself & I" artist, here are just a few:

Funnily enough, this isn't the first time Rexha has been compared to someone from the Kardashian-Jenner family. Many people have also thought for some time now that she looks similar to Kylie Jenner. Again, the resemblance probably has something to do with the blonde hair that Kylie has sported from time to time. People really started to compare the two during the 2017 MTV Video Music Awards.

In April 2017, Rexha spoke with People about the Kylie comparisons. She said,

"It was after she went blonde. Everybody was like, 'You look like a wannabe Kylie.' I was like, 'No!' I was blonde first. She has way more fans, she was bigger before … That's just the way the world works. Sometimes I do see pictures, and I’m like, 'Oh my God, is that me or Kylie?' I question. But you know what, she’s killing it, and, I’m just doing my thing."

There's no denying these three resemble each other when they have blonde hair, especially at a quick glance. Whether you see the likeness or not, Rexha is honored to be compared to "badass" women like Kris and Kylie who are totally "killing it" these days.