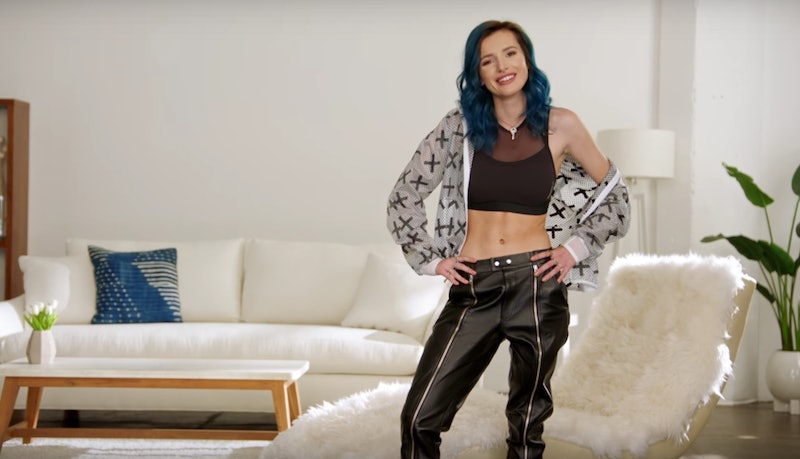 In the words of circa-2013 memes and Taylor Swift, haters gonna hate. But that's OK with actress Bella Thorne — in fact, she welcomes it. In Bella Thorne's "Thank You" video with SIX:02, Thorne takes the opportunity to express her gratitude to everyone who's tried to hold her back or put her down, and she makes it pretty clear that she's better off for it.

In the video, which is a part of SIX:02's It's Your Time campaign, Thorne says, "I'd like to take the time to thank each one of my haters for motivating me every day." This includes (but is not limited to) Stephanie from elementary school, Stephanie from middle school, a couple guys named Donovan, celebrity gossip-themed tour buses, the guy on Twitter who told her to shave her legs, and climate change (because that's serious — no, really). "I totally would be here without you, but it wouldn't be so much fun," she quips at the end. Oh, the sass.

The campaign isn't just about telling off your haters, though. SIX:02 has also announced a partnership with Step Up, an organization that "empowers girls from under-resourced communities to become confident, college-bound, career-focused, and ready to join the next generation of professional women," according to the brand. Because even though haters can be motivating, it feels pretty amazing to lift each other up, too. Of course, for those who aren't so great at the whole supportive thing, Thorne has a message.

If you're currently making your own mini-list of haters in your head, SIX:02 has you covered, too. To go along with the Bella Thorne campaign, the athleisure and workout gear company dropped a line of cheeky hats, tees, and tanks so you can tell the world you're doing just dandy even with your haters, thankyouverymuch.

The bold collection is a way to embrace the fact that not everyone's going to agree with your choices, believe in you, like you, or even be nice to you. (Like most people, I've learned this firsthand.) And even though the many people who do support you can bring a ton of encouragement and positivity into your life (thanks guys!), for better or for worse, there's nothing like using a hater's nay-saying to light a fire under your feet. Here's a look at some of the pieces from the line, available now.

1. Any Memes "Clap To My Haters" Dad Cap

Emojis just seem to have more power when they're embroidered.

2. The Base "Thank You Haters" Crop T-Shirt

A little bit savage in the best way ever. (It comes in white, too.)

The best thing about a hat? You can wear it all the time, so no one misses your message.

Just like the crop top, this V-neck comes in black as well.