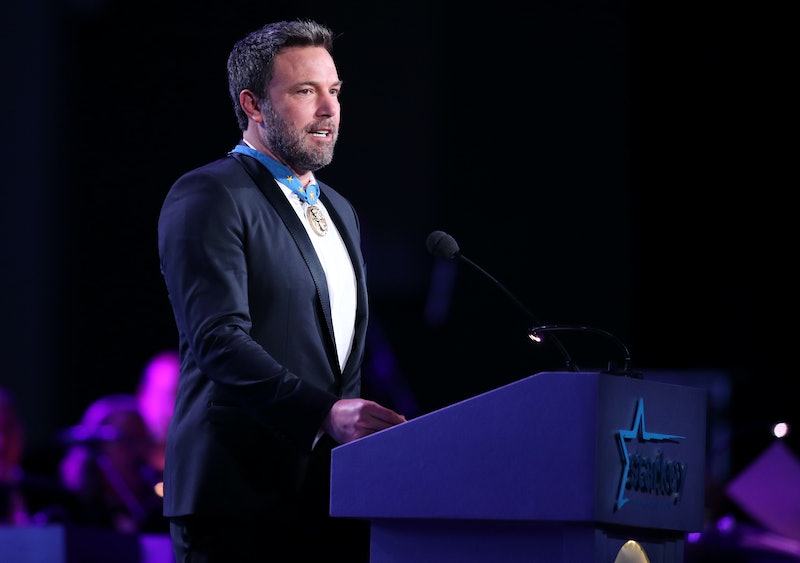 Another major Hollywood figure is speaking out about the sexual harassment and assault allegations against Harvey Weinstein. Many celebs, such as Jessica Chastain and Kate Winslet, have released statements in regards to the horrific allegations, and like his colleagues in the industry before him, Ben Affleck responded to the Weinstein allegations in a lengthy Twitter post. His response includes an important message for Hollywood to take note of.

On Tuesday, a second NYT story and a New Yorker story were published that contain more allegations against Weinstein. In the New York Times story, women, including Gwyneth Paltrow and Angelina Jolie, claim that Weinstein sexually harassed them. Paltrow claimed Weinstein asked her up to his hotel suite and then suggested they go to the bedroom for massages, which she rejected, but she feared she would lose her job. Jolie claimed to the New Yorker: “I had a bad experience with Harvey Weinstein in my youth, and as a result, chose never to work with him again and warn others when they did." In the New Yorker story, three women, including actor Asia Argento, allege that the producer raped them. A statement was released to the New Yorker by a spokesperson for Weinstein that states "any allegations of non-consensual sex are unequivocally denied."

More and more famous faces are speaking out as new reports are published, but in the days since the first NYT story came out, there were few high-profile men in Hollywood who had commented on the allegations. The ones who did included Mark Ruffalo, Seth Rogen, and George Clooney. Clooney even said that a failure to speak out about sexual assault allegations implied complicity, when he spoke with The Daily Beast.

On Tuesday morning, Affleck posted his message in which he says that he is "saddened and angry" over the allegations about his collaborator. He writes, "This is completely unacceptable, and I find myself asking what I can do to make sure this doesn't happen to others." He ends the statement with a call to action for Hollywood, and society in general:

"We must support those who come forward, condemn this type of behavior when we see it and help ensure there are more women in positions of power."

Affleck's message is one that Hollywood needs to hear right now. He's not only saying that more people should be standing up in support of the women who are making these allegations, but also offering ways in which the industry can improve overall. Hollywood is long overdue to offer more positions of power to women and women of color, especially.

Like Affleck's message implies, allowing more women to be in positions of power might help prevent abuses of power. However, this is only one part of the issue. The bigger issue at hand involves men with great influence being able to behave indecently and get away with it. Behavior like that which is being alleged against Weinstein should be widely condemned by everyone in the industry — and especially by those afforded with privilege like Affleck, who can actually make a change.

In response to the allegations in the New Yorker story published on Tuesday, a spokesperson for Weinstein released the following statement to the publication:

More like this
Mel B Speaks Out Against Domestic Violence In A Powerful Speech
By Sophie McEvoy
At 28, Melanie C Was Falling In Love & Reclaiming Her Confidence
By Olivia-Anne Cleary
Megan Rapinoe's Relaxation Hack Is Super Dreamy
By Carolyn Steber
Sarah Jessica Parker “Doesn't Remember” What 'Hocus Pocus' Is About In Resurfaced Clip
By Emily Mae Czachor and Radhika Menon
Get Even More From Bustle — Sign Up For The Newsletter