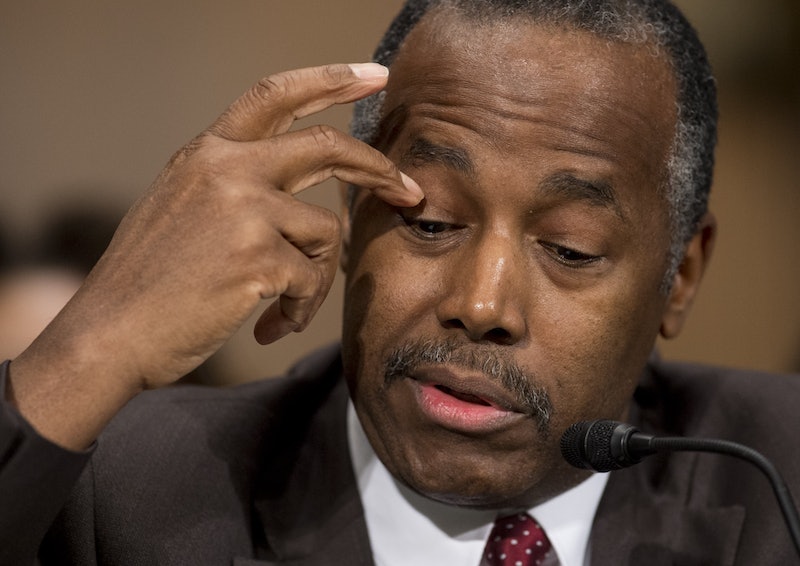 At his first press conference since being elected president, President-elect Donald Trump put forward a plan he claimed would deal with conflicts of interest and ethical concerns from his continued stake in his business empire. Ethics experts immediately blasted Trump's plan as insufficient. Walter Shaub, the director of the nonpartisan Office of Government Ethics, said in a speech at the Brookings Institution, "This is not a blind trust. It's not even close."

Beyond simply hammering Trump for his plan on how he would cease to manage his companies but continue his ownership while his sons run the businesses allegedly without his input or knowledge, Democratic senators are beginning to use his disregard for ethics norms as a cudgel with which to smack around nominees for the Trump cabinet. And, by extension, to tar the rest of the Trump administration with the same potential for corruption as its leader.

This came up Thursday morning in Senate questioning of Ben Carson, who, despite no background in housing policy, is Trump's nominee for Secretary of Housing and Urban Development. Considering the President-elect's involvement in real estate, government subsidies in the housing industry could be an issue.

It certainly was for Senator Elizabeth Warren, who somehow managed to get Carson to say, "It will not be my intention to do anything to benefit any American."

Warren wasn't the only one. Senator Sherrod Brown of Ohio (after Carson accurately said his voice sounds like Columbo's), was more specific, asking Carson about Trump's stake in the Starett City housing project in Brooklyn, which is subject to federal housing rules. Carson said that if an issue came up he'd make sure to inform the committee.

It seems unlikely that Carson will be denied confirmation to the post, and hammering him on Trump's flaws probably won't be enough to taint HUD for the whole of the Trump years — as it shouldn't.

At another point in the hearing Senator Thom Tillis used his time to express his view that Warren's questions and other focuses on Trump's ethics were much ado about nothing, and complimented Carson on his response: "You know what I like most about your answer? You could not be pinned down to a 'yes' or 'no' answer."

But Trump leaving his ethical issues unresolved could make these kinds of moments look really bad in hindsight. Even the most careful presidents end up embroiled in scandal at one point or another — the federal government is enormous, and features many places for things to go wrong. President Obama, by most accounts, led a very clean administration, and was still bogged down at various points by issues like mismanagement at Veterans Affairs and controversy over audits of conservative political groups by the IRS. A Trump administration that already shows this little concern for ethical issues could be in big trouble in years to come.

And if the Trump administration ends up embroiled in a scandal that involves HUD, those questions by Senators Warren and Brown will come back to haunt Carson. And Senator Thillis laughing off the potential for serious breaches of ethics will probably haunt him, too, in campaign ads that remind voters of it.

More like this
Romance Authors Are Mobilizing For Reproductive Rights
By Natalia Perez-Gonzalez
New Coins Unveiled As King Charles III's Reign Gets Underway
By Sam Ramsden
In Elizabeth Strout’s Novels, The World Changes But People Stay The Same
By Morgan Leigh Davies
The Queen’s Cause Of Death May Not Be Formally Announced
By Shahed Ezaydi and Catharina Cheung
Get Even More From Bustle — Sign Up For The Newsletter