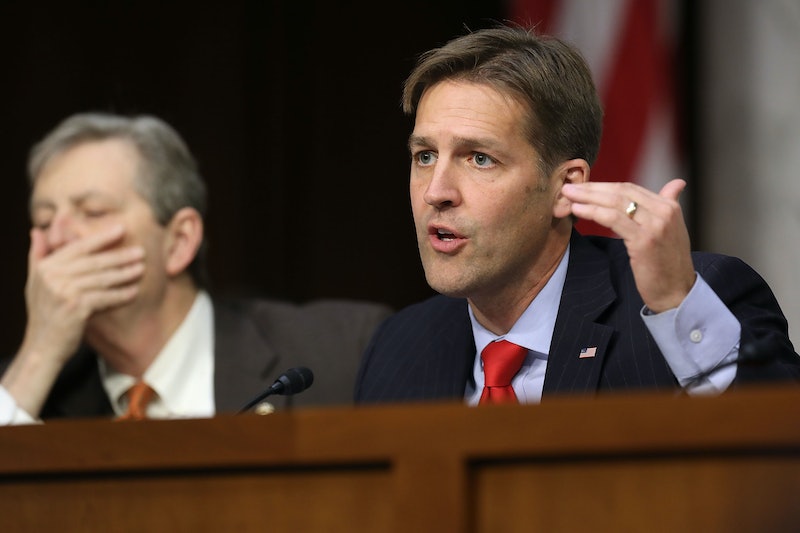 On Tuesday, Republican Sen. Benjamin Sasse said that "deranged comments" about Supreme Court justice nominee Brett Kavanaugh actually had nothing to do with him. Instead, Sen. Sasse lamented "hysterical" Kavanaugh critics, using a term historically used to describe women as emotionally irrational. Activists quickly took to Twitter to voice their objections.

"People are going to pretend that Americans have no historical memory and supposedly there haven't been screaming protesters saying 'women are going to die' at every hearing for decades," Sen. Sasse said on Tuesday, during the first day of Kavanaugh's Supreme Court confirmation hearings. He continued:

In the span of just a few seconds, Sasse used the term "hysteria" three separate times, arguing that some Kavanaugh protestors are upset about his nomination because they don't grasp how the Supreme Court functions.

"Our political commentary talks about the Supreme Court like they're people wearing red and blue jerseys," he said. "That's a really dangerous thing."

Many of those who oppose Kavanaugh are particularly concerned about how he would rule on cases related to abortion access and legality. Abortion access is often considered a women's issue, and women are frequently on the front lines when such access needs defending. That Sen. Sasse described Kavanaugh's opponents as hysterical provoked major backlash on Twitter.

"At least 8% of maternal deaths worldwide are from unsafe abortion and more than 22,000 women die each year from complications of unsafe abortion," wrote writer Lauren Rankin. "The 'hysteria' that Ben Sasse notes (a term rife with sexism) is women literally begging their government NOT TO KILL THEM."

Others were quick to point out that the term "hysteria" has long been used to dismiss what women think and feel.

"Sasse now calls the criticism 'hysteria,'" wrote journalist Jessica Mason Pieklo. "Reminder hysteria is a gendered term that used to be a 'medical diagnosis' of the free-floating womb that made women 'crazy.'"

Abortion rights groups also had something to say about Sen. Sasse's comments.

"@SenSasse apparently thinks it's a big joke that 'women will die if Kavanaugh is confirmed,'" tweeted out the NARAL Twitter account. "Senator, did you miss the part of American history—or the horrifying status quo across the globe—where criminalizing abortion has killed and continues to kill women???"

For many, describing abortion rights activism as "hysteria" touched on personal very personal experiences. Abortion access, for many women, can literally be the difference between life and death.

"The hysteria comes from those of us who’ve had family members die, both from illegal abortions and pregnancy complications," wrote Renee Bracey Sherman. "I’m glad this seems to have never touched Senator Sasse’s family history, but it’s deep in mine."

Though feminists and activists were upset about Sasse's characterization of pro-life activism surrounding Supreme Court confirmation hearings, many others on Twitter expressed appreciation for his remarks. And above all else, that support underscores that, when it comes to abortion rights in the United States, the fight is far from over.