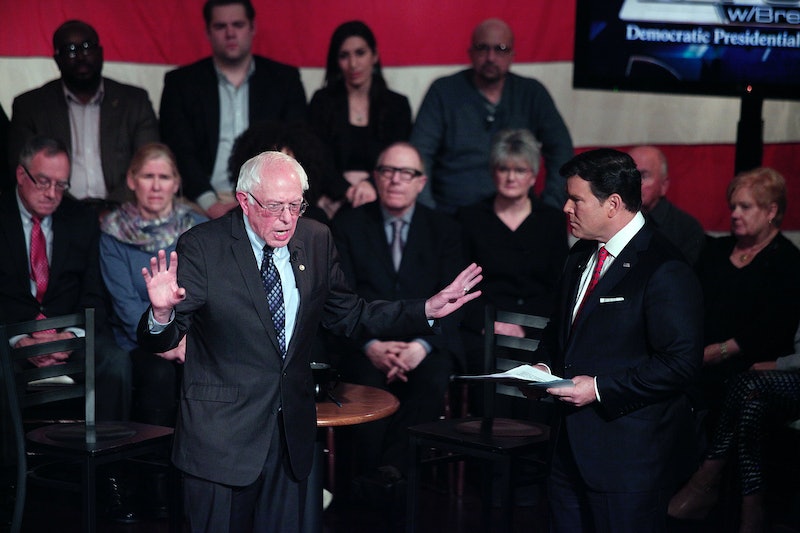 President Donald Trump's review of a particular Fox News town hall showed he wasn't too thrilled about it. On Tuesday, Trump reacted to Bernie Sanders' Fox News town hall appearance with incredulity on Twitter. "So weird to watch Crazy Bernie on @FoxNews," the president wrote. "Not surprisingly, @BretBaier and the 'audience' was so smiley and nice. Very strange, and now we have @donnabrazile?"

On Monday night, the progressive Vermont senator, who recently declared his bid for the 2020 presidential race, appeared on Fox News and discussed his Medicare For All proposal among other things. Sanders' hour-long interview with Fox News anchors Bret Baier and Martha MacCallum took place in Bethlehem, Pennsylvania, according to USA Today.

Bringing up health care on Monday, Baier asked the audience if they were recipients of private health insurance through their jobs. It looked like lots of people in the crowd raised their hands. The Fox News anchor then asked the audience if they would be interested in trying out a nationalized form of health care like Sanders has proposed. At that moment, the majority of the audience raised their hands with some even cheering and hooting in the background.

According to CNBC, Baier said that the audience was mixed; members of the Democratic and Republican parties were present alongside those who said that they were independents.

At one point, Baier pushed on Sanders' health care proposal and asked whether the senator had any thoughts on the possibility that the private health insurance market would take a hit if Medicare For All became a reality.

In response, Sanders told Baier that Medicare For All — which comes down to a single-payer health care system — would add stability for people seeking health care services in the United States. "Millions of people every single year lose their health insurance," Sanders responded. "You know why? They get fired, or they quit and they go to another employer."

"Every year, millions of workers wake up in the morning and their employer has changed the insurance that they have," the Vermont senator went on to add. "Maybe they like their doctors. ... So this is not new. Every year. Now, what we’re talking about is stability. That when you have a Medicare for All, it is there now and it will be there in the future."

For what it's worth, the Vermont senator has been unapologetically clear about his position on health care. In fact, in 2017, Sanders wrote an op-ed for The New York Times explaining why America, he believed, needed Medicare For All.

"We remain the only major country on earth that allows chief executives and stockholders in the health care industry to get incredibly rich, while tens of millions of people suffer because they can't get the health care they need," Sanders wrote.

While the president may be in disbelief about Fox News' town hall reaction to Sanders, Baier made a point to invite Trump on a town hall forum. "Thanks for watching Mr. President," Baier tweeted on Tuesday, "we’d love to have you on a town hall soon — or even an interview on @SpecialReport — it’s been awhile. We cover all sides."