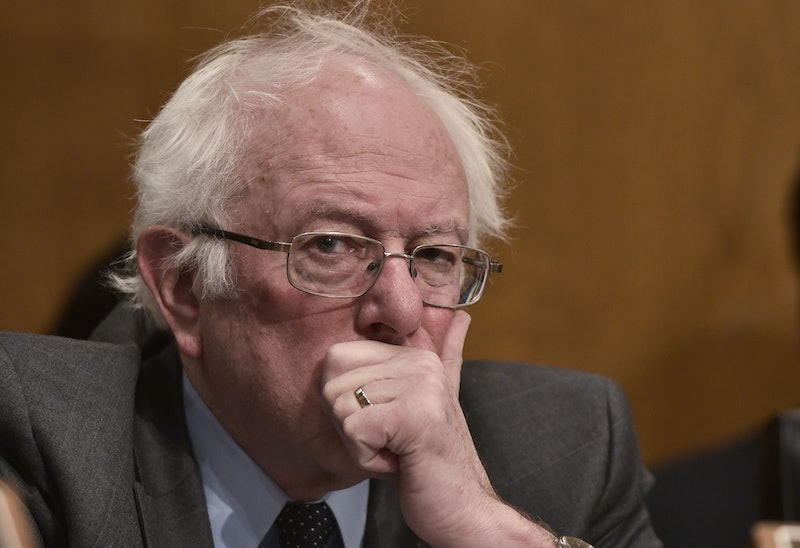 Oklahoma Attorney General Scott Pruitt found himself in the hot seat during his Senate confirmation hearing as Environmental Protection Agency administrator on Wednesday. And the one who put him there was none other than a certain Vermont congressman. Senator Bernie Sanders grilled Pruitt about climate change — and if, like most people, you weren't able to see their interaction in person, you can watch footage of it from the comfort of your own home.

Sanders pretty concisely summed up why he had doubts about Pruitt's nomination, saying, "The fear is that the nomination of Mr. Pruitt is a nomination designed to protect the fossil fuel industry and not the environment." Considering Pruitt's background, it makes sense that Sanders was concerned about his connections to fossil fuel; since 2002, Pruitt has reportedly received more than $345,000 in campaign contributions from the fossil fuel industry, according to the National Institute on Money in State Politics. Additionally, Pruitt wrote an op-ed in the National Review in which he claimed that the debate about the impacts of climate change "is far from settled."

Pruitt may have gone against Trump’s previous stance that “Climate change is a hoax” during the hearing, but Sanders wasn’t about to accept that Pruitt had completely left behind his previous climate change skepticism.

The Vermont senator asked Pruitt if he disagreed with the "97 percent of the scientists who wrote articles in peer reviewed journals" who say the primary cause of climate change is human activity. The two went back and forth for a little before Sanders asked Pruitt about his personal opinion on climate change.

"My personal opinion is immaterial to the job," Pruitt began to respond. Of course, by this point Sanders cut him off, exclaiming, "Really? You are going to be the head of the agency to protect the environment, and your personal feelings about whether climate change is caused by human activity and carbon emissions is immaterial?"

It's true that in some cases personal opinions are irrelevant to whether you can carry out the duties of a given position. However, Pruitt's recent denial of human impacts on climate change and his interactions with fossil fuel companies could likely impact his ability to prioritize the protection of the environment from greenhouse gases.

Pruitt did acknowledge that he thinks "the administrator has a very important role to perform in regulating CO2." He also said he was "concerned" about earthquakes in Oklahoma after being pressed on the issue by Sanders. But this wasn't enough for the Vermont senator, who ended his questioning of Pruitt by saying, "If that’s the kind of EPA administrator you will be, you’re not going to get my vote."

Ouch. Clearly Pruitt has a lot of work to do if he wants to gain the approval of Sanders and others who share his views. Hopefully Pruitt will make stopping climate change a priority if he's confirmed.