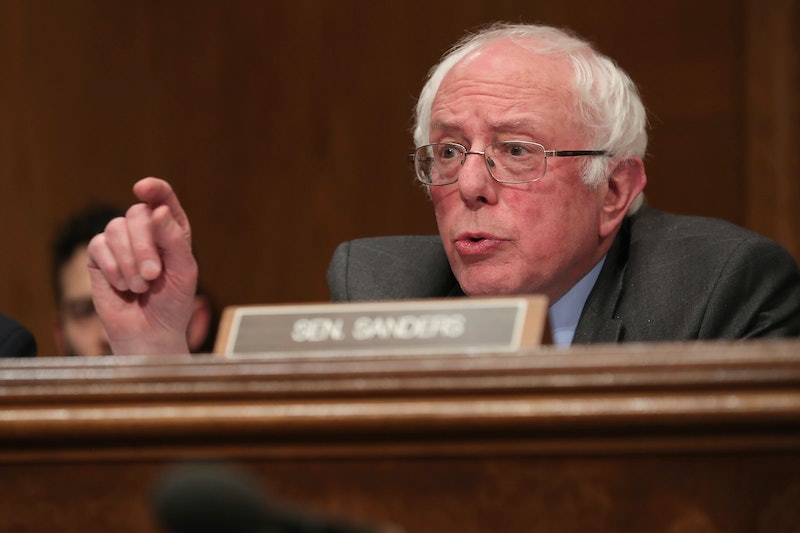 There are a lot of concerns floating around about Donald Trump's pick for secretary of education, whether regarding her refusal to say she'll enforce college campus sexual assault legislation or the fact that she hasn't submitted paperwork to the U.S. Department of Ethics or her seeming lack of support for public education. But at her confirmation hearing on Tuesday, Bernie Sanders questioned Betsy DeVos on her family's large donations to the Republican Party as well as on whether she'd commit to working with him on making college tuition free.

And in typical Sanders-style, he was, ah, straightforward about his thinking behind the questions. He started by pointing out that her family may have given approximately $200 million to the Republican Party, a number she called "possible," and then asked her straight up, "Do you think if you were not a multibillionaire, Do you think that if your family had not made hundreds of millions of dollars in contributions to the Republican Party that you would be sitting here today?"

DeVos said that she's a voice for students and parents and that there was the possibility she would have gotten her nomination without the donations, but Sanders quickly dismissed the topic and delved into the point that while she has said students should make informed post-high school education decisions, many low-income students don't have the luxury of that kind of choice.

"Will you work with me and others to make public colleges and universities tuition free through federal and state efforts?" Sanders asked. DeVos responded that she thought it was an "interesting" idea to consider, but then she said "I think we also have to consider the fact that there's nothing in life that's truly tree. somebody's going to pay for it," warranting an "Ooooooh," out of Sanders.

Sanders stopped DeVos in her tracks there, and said, "You're right, somebody will pay for it, but that takes us to another issue, and that is, right now we have proposals in front of us to substantially lower tax breaks for billionaires in this country, while at the same time low-income kids can't afford to go to college, do you think that makes sense?"

When DeVos asked if his question was really regarding how the United States can make college more affordable, he said, actually, it wasn't. "My question is should we make public colleges and universities tuition free so that every family in America regardless of income will have the ability to have their kids get a higher education."

DeVos often sidestepped the question saying she was looking forward to working on helping people get opportunities and quality educations, without ever saying how she'd plan to do that, something to note, especially considering she's tried to steer money away from public schools and into publicly funded but privately run schools, as The New York Times reported.

This was likely something Sanders took into consideration when planning his questions for the education nominee, but even with Sanders' bluntness on what he'd like to see from DeVos — like free college for all — he probably knows that he won't get it if she's confirmed.