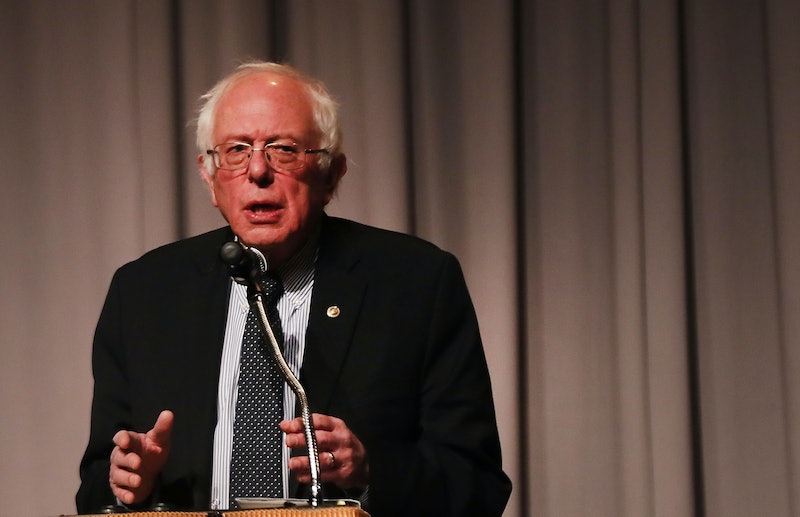 On Saturday, Vermont Senator and former Democratic presidential primary candidate Bernie Sanders congratulated the Women's March on Washington via both Facebook and Twitter. In his posts, he took a strong stand for both women's reproductive rights and Planned Parenthood, urging America move forward, not backward. On Facebook, alongside a New York Times article titled "Pictures from Women's Marches around the World," he wrote:

Congratulations to the women marching around the world today. We will not go back to the days when women had to risk their lives to end a pregnancy. The decision to have an abortion must remain one for a woman, not the government. And we will not go backward to a time before Planned Parenthood, when millions of women had no access to birth control or cancer screenings. We must go forward to ensure full reproductive justice for all women.

Though Sanders hadn't been particularly vocal about the massive event, which had extended to every American state thanks to "sister" marches, his support for women's rights and women's reproductive rights, in particular, has been consistent. In fact, some phrases from the Facebook post come directly from the text on his official websites "Fighting for Women's Rights" page.

Posted around the same time on Saturday, his Twitter post regarding the march is a direct warning for new President Donald Trump. He wrote:

And Sanders couldn't be more correct. Though the Women's March, as its name suggests, was built around feminist ideals and the promotion of women's rights, its message is incredibly multi-faceted. The Women's March was about protecting the LGBT community. It was about fighting back against xenophobia and hate. It was about standing up for minorities and equality on all fronts. And most of all, it was about unity.

Ultimately, its quite possible that this unity brought more people to Washington D.C. than Trump's inauguration did, though exact attendance numbers are difficult to estimate. However, according to tweets from Metro, Washington D.C.'s subway system, 193,000 subway trips had been made before 11 a.m. EST on inauguration day. On the following day, which is when the Women's March took place, 275,000 subway trips had been recorded by the same time. In his speech at the CIA headquarters on Saturday, Trump went on to blame "the media" for supposedly underestimating how many people were in the crowd.

But as Sanders suggested, Trump has bigger things on his plate to worry about. Most notably, this includes the fact that the hundreds of thousands of people who attended the Women's March will hold him accountable for his every move.