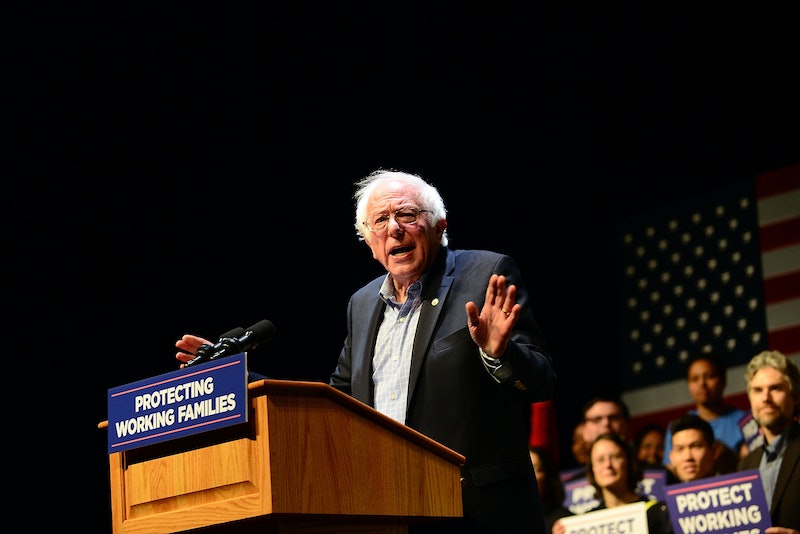 On Monday, a Democratic presidential candidate released 10 years of tax returns. Bernie Sanders' tax returns were notable in one major way: they showed that, since 2016 (when he first ran for president), the politician's income has grown quite a bit. In fact, there's one central factor playing into his millionaire status: some pretty major book royalties.

Sanders released his tax returns, which he files jointly with his wife each year, straight to his website on Monday. Along with the tax returns, he released a statement as well, which read in part,

These tax returns show that our family has been fortunate. I am very grateful for that, as I grew up in a family that lived paycheck to paycheck and I know the stress of economic insecurity. That is why I strive every day to ensure every American has the basic necessities of life, including a livable wage, decent housing, health care and retirement security. I consider paying more in taxes as my income rose to be both an obligation and an investment in our country. I will continue to fight to make our tax system more progressive so that our country has the resources to guarantee the American Dream to all people.

As CNN notes, the Sanders' joint income skyrocketed from $240,622 in 2015 to $1,073,333 just a year later. In the last three years, Sanders and his wife have earned a cumulative $2.79 million, the news network reports, and the royalties from five books (four written by Sanders, and one by his wife, Jane) are the primary reason for this change in wealth accumulation.

The first nonfiction book Sanders wrote that impacted this time frame was The Speech, which was released on Dec. 22, 2015; the next two books to follow it were Our Revolution: a Future to Believe in, released on Nov. 15, 2016, and Where We Go From Here: Two Years in the Resistance, which was released on Sept. 3, 2019 and has since become a bestseller. Sanders also wrote a political activism guide for youth during this time period, titled The Bernie Sanders Guide to Political Revolution. As for Jane, The New York Times notes that she reported earnings of $106,000 in 2017 for her work as a book author, though it's not clear which book or books these earnings came from.

On Monday evening, while participating in a town hall, Sanders disputed the notion that his wealth was proof of the "American dream." To Fox News' Bret Bair, one of the moderators of the discussion, Sanders said (per The Times), "You know, I have a college degree. I’m a United States senator. But a lot of people don’t have a college degree. A lot of people are not United States senators."

Sanders concluded his response by saying, “So what we are fighting for, Bret, is a society not where a just few people can make a whole lot of money, but a society where everybody in this country has the opportunity to live in security and dignity.” If you want to read Sanders' tax forms for yourself, all 10 years of financial disclosures are available to view in full on his website.